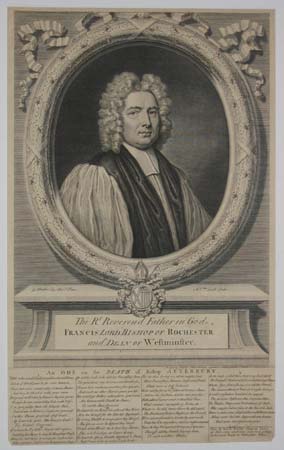 He was born at Milton Keynes in , where his father was . He was educated at and , where he became a . In 1682, he published a translation of "Absalom and Achitophel" into Latin verse with neither the style nor the versification typical of the Augustan age. In English composition he met greater success; in 1687 he published "An Answer to some Considerations, the Spirit of and the Original of the ", a reply to , who, when elected master of in 1676, had printed in a press set up by him there an attack on the Reformation written by . Atterbury's treatise, though highly praised by Bishop , was more distinguished for the vigour of his than the soundness of his arguments, and the s accused him of , and of having, by implication, called King James "".

After the "", Atterbury readily swore fealty to the new government. He had taken holy orders in 1687, preached occasionally in with an eloquence which raised his reputation, and was soon appointed one of the royal chaplains. He ordinarily lived at Oxford, where he was the chief adviser and assistant of , under whom Christ Church was a stronghold of ism. He inspired a pupil, Charles Boyle, in the "Examination of Dr. Bentley's Dissertations on the Epistles of Phalaris", an attack (1698) on the Whig scholar , arising out of Bentley's impugnment of the genuineness of the "Epistles" of . He was figured in the "Battle of the Books" as the Apollo who directed the fight, and was, no doubt, largely the author of Boyle's essay. Bentley spent two years in preparing his famous reply, which owned not only that the letters ascribed to Phalaris were spurious, but that all Atterbury's wit and eloquence were a cloak for an audacious pretence at .

Atterbury was soon occupied in a dispute about matters still more important and exciting. High Church and Low Church divided the nation. The majority of the clergy were on the High Church side; the majority of King William's bishops were inclined to . In 1700 the Convocation, of which the lower house was overwhelmingly Tory, met after a gap of ten years. Atterbury threw himself with characteristic energy into the controversy, publishing a series of treatises. Many regarded him as the most intrepid champion that had ever defended the rights of the clergy against the of s. In 1701 he was awarded with the ry of and a prebend in . The lower house of Convocation voted him thanks for his services; the University of Oxford created him a rector of ; and in 1704, soon after the accession of Queen Anne, he was promoted to the of (although the Tories still had the chief weight in the government).

In 1710, the prosecution of produced a formidable explosion of High Church fanaticism. At such a moment Atterbury could not fail to be conspicuous. His inordinate zeal for the body to which he belonged and his rare talents for agitation and for controversy were again displayed. He took a chief part in framing that artful and eloquent speech which Sacheverell made at the bar of the Lords, and which presents a singular contrast to the absurd and scurrilous sermon which had very unwisely been honoured with . During the troubled and anxious months which followed the trial, Atterbury was among the most active of those s who inflamed the nation against the Whig ministry and the Whig parliament. When the ministry changed and the parliament was dissolved, rewards were showered upon him. The lower house of Convocation elected him , in which capacity he drew up, in 1711, the often-cited "Representation of the State of Religion"; and in August 1711, the queen, who had selected him as her chief adviser in ecclesiastical matters, appointed him dean of Christ Church on the death of his old friend and patron Aldrich.

At Oxford he was as conspicuous a failure as he had been at Carlisle, and it was said by his enemies that he was made a bishop because he was so bad a dean. Under his administration, Christ Church was in confusion, scandalous altercations took place, and there was reason to fear that the great Tory college would be ruined by the tyranny of the great Tory doctor. In 1713 he was removed to the bishopric of Rochester, which was then always united with the deanery of . Still higher dignities seemed to be before him, for though there were many able men on the episcopal bench, there was none who equalled or approached him in parliamentary talents. Had his party continued in power it is not improbable that he would have been raised to the archbishopric of Canterbury. The more splendid his prospects the more reason he had to dread the accession of a family which was well known to be partial to the Whigs, and there is every reason to believe that he was one of those politicians who hoped that they might be able, during the life of Anne, to prepare matters in such a way that at her death there might be little difficulty in setting aside the and placing on the throne.

Her sudden death confounded the projects of these conspirators, and, whatever Atterbury's previous views may have been, he acquiesced in what he could not prevent, took the oaths to the , and did his best to ingratiate himself with the royal family. But his servility was requited with cold contempt; he became the most factious and pertinacious of all the opponents of the government. In the his oratory, of old, pointed, lively and set off with every grace of pronunciation and of gesture, extorted the attention and admiration even of a hostile majority. Some of the most remarkable protests which appear in the journals of the peers were drawn up by him; and, some of the bitterest of those pamphlets which called on the English to stand up for their country against the aliens who had come from beyond the seas to oppress and plunder her, critics have detected his style. When the rebellion of 1715 broke out, he refused to sign the paper in which the bishops of the province of declared their attachment to the accession, and in 1717, after having been long in indirect communication with the exiled family, he began to correspond directly with James Francis Edward Stuart.

In 1721, on the discovery of the plot for the capture of the royal family and the proclamation of King James, Atterbury was arrested with the other chief malcontents, and in 1722 committed to the , where he remained in close confinement during some months. He had carried on his correspondence with the exiled family so cautiously that the circumstantial proofs of his guilt, though sufficient to produce entire moral conviction, were not sufficient to justify legal conviction. He could be reached only by a bill of pains and penalties. Such a bill was quite prepared to support, and in due course a bill passed the depriving him of his spiritual dignities, banishing him for life, and forbidding any British subject to hold intercourse with him except by the royal permission. In the Lords the contest was sharp, but the bill finally passed by eighty-three votes to forty-three.

Atterbury took leave of those whom he loved with a dignity and tenderness worthy of a better man, to the last protesting his innocence with a singular disingenuousness. After a short stay at he went to , and became the leading man among the Jacobite refugees there. He was invited to by the Pretender, but Atterbury felt that a bishop of the would be out of place in Rome, and declined the invitation. During some months, however, he seemed to be high in the good graces of James. The correspondence between the master and the servant was constant. Atterbury's merits were warmly acknowledged, his advice was respectfully received, and he was, as Bolingbroke had been before him, the of a king without a kingdom. He soon, however, perceived that his counsels were disregarded, if not distrusted. His proud spirit was deeply wounded. In 1728 he left Paris, occupied his residence at , gave up , and devoted himself entirely to letters. In the sixth year of his exile he had so severe an illness that his daughter, Mrs Morice, herself very ill, determined to run all risks that she might see him once more. She met him at , received the communion from his man, and died that night.

Atterbury survived the severe shock of his daughter's death for years. He even returned to Paris and to the service of the Pretender, who had found out that he had not acted wisely in consorting with one who, though a heretic, was the most able man in the Jacobite party. In the ninth year of his banishment he published a luminous, temperate and dignified vindication of himself against , who had accused him of having, in concert with other Christ Church men, garbled the new edition of Clarendon's "History of the Rebellion". The charge, as respected Atterbury, had not the slightest foundation; for he was not one of the editors of the "History", and never saw it until it was printed. A copy of this little work he sent to the Pretender, with a letter singularly eloquent and graceful. It was impossible, the old man said, that he should write anything on such a subject without being reminded of the resemblance between his own fate and that of Clarendon. They were the only two English subjects who had ever been banished from their country and debarred from all communication with their friends by act of parliament. But here the resemblance ended. One of the exiles had been so happy as to bear a chief part in the restoration of the royal house. All that the other could now do was to die asserting the rights of that house to the last. A few weeks after this letter was written Atterbury died, on 22 February 1732. His body was brought to England, and laid, in . In his papers now kept at the Library of Westminster, he desired to be buried "as far from kings and politicians as may be." Thus he is buried next to this century's tourist information booth kiosk. The black slab is simple, indicating his name, birth and death dates. Due to tourist traffic, the inscription is now considerably worn.

It is agreeable to turn from Atterbury's public to his private life. His turbulent spirit, wearied with faction and treason, now and then required repose, and found it in domestic endearments, and in the society of the most illustrious literary men of his age. Of his wife, , whom he married while at Oxford, little is known; but between him and his daughter there was an affection singularly close and tender. The gentleness of his manners when he was in the company of a few friends as such as seemed hardly credible to those who knew him from only his writings and speeches. Atterbury's taste in was excellent; and his admiration of genius was so strong that it overpowered even his political and religious antipathies. Along with other deans, he founded one of the first philosophy groups then meeting at coffee houses in London, named the Kit Kat Club. This group included several Deans, including Church Deans Johnathan Swift and Alexander Pope. His fondness for , the mortal enemy of the Stuarts and of the Church of England, seemed a crime to many Tories; and he was the close friend of . His favourite companions, however, were, as might have been expected, men whose politics had at least a tinge of Toryism. He was friendly with , and . With he had a close intimacy. found in Atterbury not only a warm admirer, but a most faithful, fearless and judicious adviser, as well as an editor as requested.