Sir David Rowat Barclay and Sir Frederick Hugh Barclay (both born on 27 October 1934[2]) are British businessmen. The identical twin brothers have very substantial business interests primarily in media, retail and property. The Sunday Times Rich List of 2007 estimated their wealth at £1.8 billion. They have earned a reputation for avoiding publicity, and are often described as reclusive. Sir David's son Aidan Barclay manages their UK businesses.

Their Press Holdings company owns The Business and The Spectator magazine. The Telegraph Group Limited titles are controlled via a wholly owned subsidiary, Press Acquisitions Limited.[3]

The Barclay brothers were born (within ten minutes of each other) in Hammersmith, London to Scottish parents Frederick Hugh Barclay, a Scottish travelling salesman,[4] and his wife Beatrice Cecilia Taylor (died 1989),[5] who had a total of ten children. Their father died when they were twelve, and they left school four years later (1950) to work in the accounts department at General Electric before setting up as painters and decorators.[2]

In 1955 David married Zoe Newton, a grammar school girl who trained as a ballet dancer. The couple married at St John the Baptist Church, Holland Road, in Kensington.[6] In spite of being only 4'11" (1.5 metres), Zoe pursued a modelling career and became the most photographed and highly paid model of the time, [7] appearing on the front of popular magazines such as Picturegoer. [8] She appeared on television and in the Dairy Council advertisements as the “drinka pinta milka day” girl.[9]

At the end of the 1950s Frederick and his younger brother, Douglas, were running Candy Corner, a tobacconists and confectioners on the edge of Kensington. However, in November 1960 the business folded when Frederick and Douglas were made bankrupt at the High Court after their landlord seized the shop because they were in breach of the terms of the lease.[10] A notice in the London Gazette at that time announced the bankruptcies, listing a former business interest of Frederick, then aged 26, and Douglas, two years his junior, as a builders and decorators called Barclay Brothers based at the Barclay family home.

Meanwhile David was registered as a director of Hillgate Estate Agents in 1962, with his wife Zoe as a co-director (she had given up her modelling career to concentrate on her young sons, Aidan, Howard and Duncan). By 1968, however, Frederick was running the family businesses, replacing Zoe on the Hillgate board. He had obtained the discharge of his bankruptcy after David stepped in and paid the creditors. During this time they were redeveloping old boarding houses in London and making them into hotels.

Between 1968 and 1974, the twins received increasingly large loans from the Crown Agents, a government agency designed to help the colonies and developing countries do business in Britain. In 1970 they bought Gestplan Hotels — which operated the exclusive Londonderry House Hotel in Park Lane — from a group of Lebanese bankers.[11] The property crash in late 1973 brought an end to the Crown Agents, and their debts were sold on at a fraction of the original price.

In the mid-1970s Frederick met and married Hiroko Asada, née Kuzusaka, who was a familiar figure among Japanese society in London (she brought a son from her previous marriage, Ko Asada).

From the late 1960s onwards the Barclay brothers continued to build up stakes in a variety of businesses, including breweries and casinos. In 1975, they bought the Howard Hotel, overlooking the Thames at Temple Place. In 1983 they bought Ellerman, the brewing and shipping group for £45m. They later sold its brewing division for £240m. They used the proceeds to buy the Ritz Hotel in London's Piccadilly in 1995. They spent £370 million on Gotaas-Larsen, a Bermuda-based shipping company, and £200 million on the Automotive Financial Group, a motor retail chain in 1994.

The Barclays are considered by some to be philanthropists and were knighted in 2000 for their support to medical research, to which they have donated an estimated forty million pounds between 1987 and 2000.[12] 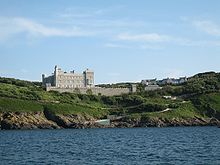 In 1993, the Barclay brothers bought the island of Brecqhou, one of the Channel Islands, located just west of Sark.

Their own mock-Gothic castle on Brecqhou, designed by Quinlan Terry, features 3-foot (0.91 m) granite walls, battlements, two swimming pools and a helicopter pad. The brothers are tax exiles, and give their address as Le Montaigne, 7 Avenue de Grande Bretagne, 98000 Monaco.[15]

Since their purchase of Brecqhou, the Barclays have been in several legal disputes with the government of Sark over such issues as the Barclays' violation of Sark's law banning motor cars. They have also expressed a desire to make Brecqhou politically independent from Sark - building on the research of William Toplis, the painter, and others, who argued that Brecqhou was not a part of the fief of Sark.

In the mid-1990s, the brothers petitioned the European Court of Human Rights in Strasbourg, France, challenging Sark's inheritance law, which mandated their island be left to Sir David's oldest son. The brothers wanted to will their estate equally to their four children.[16] Sark's legislature decided to amend the inheritance law, allowing residents to leave property to any one of their children.

In 2002, The brothers claimed their property tax was too high, particularly since they maintained Brecqhou's paths and dock. Fearing more litigation, Sark officials cut the Barclay's tax rate.[16]

In 2008 (partially due to legal activity by the Barclay brothers), Sark dismantled its 443-year-old feudal system of government on the premise that this was necessary to comply with the European Convention on Human Rights. On 16 January 2008 and 21 February 2008, the Chief Pleas approved a law which introduced a 30-member chamber, with 28 members elected in Island-wide elections, one hereditary member and one member appointed for life. On 9 April 2008, the Privy Council approved the Sark law reforms, and the first elections under the new law were held in December 2008.

On 11 December 2008, the Barclay brothers were in the news for pulling out their investments (which include hotels) from the island of Sark, causing staff to be made redundant after local voters did not support candidates championed by the Barclay brothers. The brothers had previously warned that if the voters chose to bring back the 'establishment' Sark leaders that are still aligned with the feudal lord then they would pull out of Sark.[17] The Barclays have since reopened all their businesses on Sark and staff were re-employed.

Subsequent to the 2008 election, the brothers believe it is wrong there are still two unelected figures on Sark's government – the seigneur and the seneschal, the local judge. They took their fight to the supreme court, arguing that the two roles break human rights laws that protect the rights of citizens to elect lawmakers.[18] Their challenge was dismissed, but the Barclays said they would continue to fight, taking their case to the European court of human rights in Strasbourg.

In 2002, the brothers purchased the Liverpool based retail company Littlewoods from its founders the Moores family for £750m. The deal was bankrolled by HBOS, which also took a five percent equity stake in the brothers bidding vehicle, LW Investments. The brothers merged the company with their earlier purchase Shop Direct to form Littlewoods Shop Direct Home Shopping Limited, which operates a majority share of the United Kingdom's home shopping market.

They also closed and sold off the Littlewoods department store chain, with the largest parcel of 120 properties being purchased by Associated British Foods for leasing mainly to its subsidiary Primark,[19] while other stores were leased to Marks & Spencer, New Look and British Home Stores.[20]

In October 2006, the Barclays sold handbag.com for £22 million. This was almost all profit: they set up the website in a joint venture with Boots in 1999.[21]

Purchase of Woolworths and Ladybird brands

On 2 February 2009 it was announced that the brothers' Shop Direct Group had purchased the Woolworths and Ladybird brand names for an undisclosed amount, from the failed Woolworths Group's administrators Deloitte.[22] The Ladybird brand is to also be sold via Shop Direct's other businesses including Littlewoods, Kays and Additions.[citation needed]

In 1992, they entered the newspaper publishing industry, buying the late Robert Maxwell's newspaper, The European.

In 1995 they bought The Scotsman newspaper, and in 1996 appointed former Sunday Times editor Andrew Neil to oversee their publishing interests. On 19 December 2005, the Barclays sold The Scotsman Publications Ltd, itself then part of Press Holdings Group, for £160 million to Johnston Press. The Barclays had owned these publications for a decade, and said they intend to use the capital raised on their other interests. During their ownership of The Scotsman the newspaper went through seven editors in nine years.

In 1998 they relaunched Sunday Business with editor Jeff Randall.

In July 2004, they bought The Telegraph Group (now Telegraph Media Group), which includes The Daily Telegraph, The Sunday Telegraph, and The Spectator after months of intense bidding and lawsuits. The Telegraph Group was owned by Hollinger Inc. of Toronto, Ontario, Canada, the newspaper group controlled by the Canadian-born British businessman Conrad Black. The brothers' period as newspaper proprietors has been more tumultuous than their property interests. At the Telegraph Group, Murdoch MacLennan made over 100 journalists redundant in 2006, prompting the National Union of Journalists to consider strike action. The Sunday Telegraph editor Dominic Lawson was sacked and replaced by Sarah Sands in June 2005 but she lasted just nine months. Patience Wheatcroft, from The Times was appointed editor in March 2006. She was later replaced by Ian McGregor in 2007.