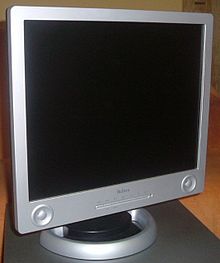 'Flat Panel TVs' have existed since 1964, and are much thinner and lighter than traditional televisions.

Flat panel displays (sometimes called flatscreen, although, strictly speaking, flatscreen is used to describe CRT screens that have a completely flat front surface) encompass a growing number of electronic visual display technologies. They are much lighter and thinner than traditional television sets and video displays that use cathode ray tubes (CRTs), and are usually less than 100 mm (4 in) thick. They can be divided into two general display technology categories: volatile and static.

The first-ever flat panel display was invented in 1964 at the University of Illinois.[1] The first-ever active-matrix addressed display was made by T Peter Brody's Thin-Film Devices department at Westinghouse Electric Corporation in 1968.[2]

In many applications, specifically modern portable devices such as laptops, cellular phones, and digital cameras, camcorders, compact cameras, Pocket video camera, whatever disadvantages exist are made up for by the portability requirements.

Most of the modern flat-panel displays use LCD technologies. Most LCD screens are backlit to make them easier to read in bright environments. They are thin and light. They provide better linearity and higher resolution.

Liquid crystal displays are lightweight, compact, portable, cheap, more reliable, and easier on the eyes than CRTs. A thin layer of liquid crystal—a liquid that exhibits crystalline properties—is sandwiched between 2 electrically conducting plates.The top plate has transparent electrodes deposited on it, and the black plate is a mirror.By applying proper electrical signals across the plates, various segments of the liquid crystal can be activated, causing changes in their light-diffusing or -polarizing properties. These segments can either transmit or block light. An image is produced by passing light through selected segments of the liquid crystal and then reflected it back from the mirror to the viewer. They are used in various electronics like watches, calculators, and notebook computers.

A plasma display consists of two glass plates separated by a thin gap filled with a gas such as neon. Each of these plates has several parallel electrodes running across it. The electrodes on the two plates are at right angles to each other. A voltage applied between the two electrodes one on each plate causes a small segment of gas at the two electrodes to glow .The glow of gas segments is maintained by a lower voltage that is continuously applied to all electrodes. A similar pulsing arrangement is used to selectively turn points off.

In an electroluminescent display (ELD), the image is created by applying electrical signals to the plates which makes the phosphor glow.

Volatile displays require that pixels be periodically refreshed to retain their state, even for a static image. This refresh typically occurs many times a second. If this is not done, the pixels will gradually lose their coherent state, and the image will "fade" from the screen.

Only a few of these displays are commercially available today, though OLED displays are beginning deployment only in small sizes (mainly in cellular telephones). SEDs were promised for release in 2006, while the FEDs (also NEDs) are (as of November 2005[update]) in the prototype stage.

Static flat panel displays rely on materials whose color states are bistable. This means that the image they hold requires no energy to maintain, but instead requires energy to change. This results in a much more energy-efficient display, but with a tendency towards slow refresh rates which are undesirable in an interactive display.