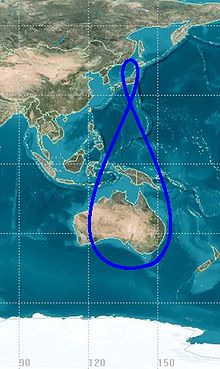 The Quasi-Zenith Satellite System (QZSS), is a proposed three-satellite regional time transfer system and Satellite Based Augmentation System for the Global Positioning System, that would be receivable within Japan. The first satellite 'Michibiki' was launched on 11 September 2010.[1] Full operational status is expected by 2013.[2][3]

Authorized by the Japanese government in 2002, work on a concept for a Quasi-Zenith Satellite System (QZSS), or Juntencho (準天頂) in Japanese, began development by the Advanced Space Business Corporation (ASBC) team, including Mitsubishi Electric Corp., Hitachi Ltd., and GNSS Technologies Inc. However, ASBC collapsed in 2007. The work was taken over by the Satellite Positioning Research and Application Center. SPAC is owned by four departments of the Japanese government, the Ministry of Education, Culture, Sports, Science and Technology; of Internal Affairs and Communications,; of Economy, Trade and Industry; and the Ministry of Land, Infrastructure and Transport.[4]

QZSS is targeted at mobile applications, to provide communications-based services (video, audio, and data) and positioning information. With regards to its positioning service, QZSS can only provide limited accuracy on its own and is not currently required in its specifications to work in a stand-alone mode. As such, it is viewed as a GNSS Augmentation service. Its positioning service could also collaborate with the geostationary satellites in Japan's Multi-Functional Transport Satellite (MTSAT), currently under development, which itself is a Satellite Based Augmentation System similar to the U.S. Federal Aviation Administration's Wide Area Augmentation System (WAAS).

The satellites would be placed in a periodic Highly Elliptical Orbit (HEO). These orbits allow the satellite to dwell for more than 12 hours a day with an elevation above 70° (meaning they appear almost overhead most of the time) and give rise to the term "quasi-zenith" for which the system is named. Similar orbits are used by the Sirius Satellite Radio system (Tundra orbit). As of June 2003, the proposed orbits ranged from 45° inclination with little eccentricity, to 53° with significant eccentricity.

Because the GPS availability enhancement signals transmitted from Quasi-Zenith Satellites are compatible with modernized GPS signals, and hence interoperability is ensured, the QZSs will transmit the L1C/A signal, L1C signal, L2C signal and L5 signal. This minimizes changes to specifications and receiver designs.

According to its original plan, QZSs was to carry two types of space-borne atomic clocks; a hydrogen maser and a Rb atomic clock. The development of a passive hydrogen maser for QZSs was abandoned in 2006. The positioning signal will be generated by a Rb clock and an architecture similar to the GPS timekeeping system will be employed. QZSS will also be able to use a Two-Way Satellite Time and Frequency Transfer (TWSTFT) scheme, which will be employed to gain some fundamental knowledge of satellite atomic standard behavior in space as well as for other research purposes.

Although the ﬁrst generation QZSS timekeeping system (TKS) will be based on the Rb clock, the ﬁrst QZS, will carry a basic prototype of an experimental crystal clock synchronization system. During the ﬁrst half of the two year in-orbit test phase, preliminary tests will investigate the feasibility of the atomic clock-less technology which might be employed in the second generation QZSS.

The mentioned QZSS TKS technology is a novel satellite timekeeping system which does not require on-board atomic clocks as used by existing navigation satellite systems such as GPS, GLONASS or the planned GALILEO system. This concept is differentiated by the employment of a synchronization framework combined with lightweight steerable on-board clocks which act as transponders re-broadcasting the precise time remotely provided by the time synchronization network located on the ground. This allows the system to operate optimally when satellites are in direct contact with the ground station, making it suitable for a system like the Japanese QZSS. Low satellite mass and low satellite manufacturing and launch cost are significant advantages of this novel system. An outline of this concept as well as two possible implementations of the time synchronization network for QZSS were studied and published in Fabrizio Tappero's PhD work.[5]