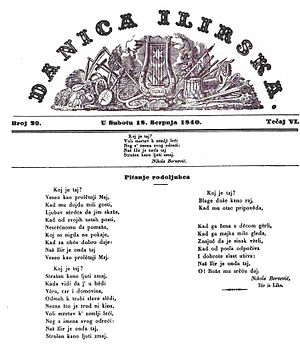 The Illyrian movement (Croatian: Ilirski pokret, Slovene: Ilirsko gibanje), also Croatian national revival (Hrvatski narodni preporod), was a cultural and political campaign with roots in the early modern period, and revived by a group of young Croatian intellectuals during the first half of 19th century, around the years of 1835–1849 (there is some disagreement regarding the official dates).[1] This movement aimed to create a Croatian national establishment in Austria-Hungary through linguistic and ethnic unity among South Slavs. 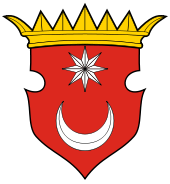 The fictional "coat of arms of Illyria" in the Fojnica Armorial.

Illyrism first arises in the late 16th century, in the context of the Counter-Reformation. This "Counter-Reformation Illyrism" or "Early Modern Illyrism" was the first revival of the notion of a realm or nation of Illyria since the Ottoman conquest of the Balkans. This idea, harking back to the Byzantine Praetorian prefecture of Illyricum, was a crucial factor in the re-emergence of a national identity in the Balkans. Illyrism constructed a Christian identity, in opposition to the Muslim Ottoman Empire.

An expression of this were the armorials compiled in the late 16th and the 17th century, which collected historical coats or arms predating the Ottoman conquest. The Fojnica Armorial goes as far as constructing a fictional "coat of arms of Illyria" and attributing it to the 14th century. The fiction of an "Illyrian Empire" begins with the so-called "Illyrian Emperors" who once ruled the Roman or Byzantine Empire and who originated on "Illyrian soil". The number of such emperors given in period sources fluctuates between 25 and 59.[2]

The Illyrian name was revived officially during the Napoleonic Wars, when the French gave the name Illyrian Provinces to the Adriatic possessions acquired from the Austrian Empire in 1809. After 1813, when the territories were again included into the Austrian Empire, the Austrians kept the denomination and formed the Kingdom of Illyria, which comprised mostly the Slovene Lands.

In 19th century Europe, liberalism and nationalism were ideologies which came to the forefront of political culture. In Central Europe, where the Habsburg Empire had long asserted control over a variety of ethnic and cultural groups, nationalism appeared in a standard format. The beginning of the 19th century "was the period when the smaller, mostly Slavic nationalities of the empire - Czechs, Slovaks, Slovenes, Croats, Serbs, Ukrainians - remembered their historical traditions, revived their native languages as literary languages, reappropriated their traditions and folklore, in short reasserted their existence as nations."[3] This revival of national heritage encompasses the Illyrian Movement in Croatia.

Just as Croatia felt nationalistic stirrings at this time, so did its larger neighbors, Hungary and Austria. Croats were uneasy with rising Hungarian nationalism, which pursued reduction of the Croatian autonomy and increased Magyarization. In order to preserve their autonomy, Croats pursued a deepening of their culture and a revival of their heritage.

In the beginning of the 1830s, a group of young Croatian writers gathered in Zagreb and established a movement for national renewal and unity of all South Slavs within the Habsburg Monarchy. The city of Zagreb had become an important center of political, economic, and cultural activity, so it was the center of the movement. Count Janko Drašković published his Dissertation in 1832, a pamphlet that later came to be considered the political, economic, social and cultural program of the movement, as it promoted the native language as official, more autonomy from central government, and better education and enlightenment for the common people.

The most important focus of the new Illyrians was the establishment of a standard language as a counter-weight to Hungarian, and the promotion of Croatian written literature and official culture. Ljudevit Gaj was instrumental in providing the foundation for the flourishing of the Croatian literature. Gaj was in fact the leader of the movement as a whole in the beginning for eight or nine years, at which point the leadership changed hands.[4] Gaj was largely responsible for writing the Croatian orthography and grammar (Kratka osnova horvatsko-slavenskog pravopisanja – Brief basics of the Croatian-Slavonic orthography), which was necessary before a literary movement would be successful.

After the government allowed the publishing of newspapers in Croatian in 1834, the new Illyrians issued the first Croatian newspaper, "Novine hrvatsko-slavonsko-dalmatinske", in 1835, establishing Croatian journalism. The paper was edited by Ljudevit Gaj and it also had a literary magazine "Danica" attached, both of which printed in Gaj's "National print" (Narodna tiskara). These literary successes "ultimately won intellectual, linguistic, and educational...independence for Croatia."[6]

In 1836, the papers were renamed to use the Illyrian name (Ilirske novine, Danica ilirska). In 1838, Janko Drašković helped found a reading room in Zagreb which served as a meeting place for the first "Illyrians".

In another cultural success, in 1846 the composer Vatroslav Lisinski wrote the first opera in Croatian, "Ljubav i zloba" (Love and malice).

The Illyrian movement, while concentrating on Croatian lands, was quite nationally inclusive, as it included many non-Croats. For example, Petar Preradović was an ethnic Serb, as was Josif Runjanin, Stanko Vraz was an ethnic Slovene, and Dimitrija Demetar was an ethnic Greek or Aromanian[1] [2]

In 1840, the Illyrian movement suffered an internal setback when Stanko Vraz, Joakim Rakovac and Ljudevit Vukotinović split off from the movement due to creative differences in poetry. In 1842 they started publishing their own literary newspaper named Kolo.

More importantly, the movement was not well received by Hungarians and pro-Hungarian nobility. In 1843, the use of the Illyrian name was banned.

Struggles in Croatian Sabor were so harsh that they caused unrest on Zagreb streets. On July 29, 1845, violent conflict causing bloodshed took place on Marko's square, later known as the "July victims". Even still, Hungarian officials were unable to crush the movement. 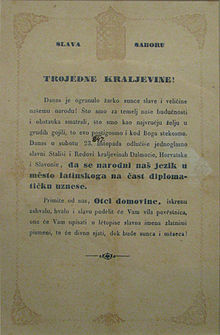 Leaflet praising the Sabor of the Triune Kingdom for elevating the "people's language" to the "honor of diplomacy".

On October 23, 1847, Ivan Kukuljević Sakcinski spoke in Sabor in favor of introducing Croatian as the official language instead of Latin, and the deputies subsequently unanimously voted in favor of that proposition.

The movement practically ceased to exist due to the Revolutions of 1848. In 1849, the Emperor Francis Joseph imposed a new constitution, all political dissent was censored, and the Danica went out of print. 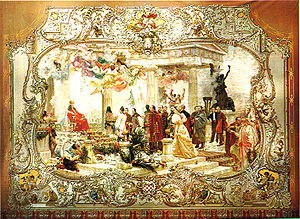 The movement's plea for unity among the Slavs, particularly South Slavs, also found supporters among prominent Serbs of the time, most notably Vuk Stefanović Karadžić, the reformer of Serbian language. Ljudevit Gaj had, in fact, appealed to Serbia (along with Dalmatia and Russia) for moral and financial support given their ethnic and cultural connections.[5]

In 1850, a small group of Illyrian and Serbian representatives signed the "Vienna agreement" which in effect proclaimed the southern Shtokavian dialect to be the standard, common language of Serbs and Croats, with Serbian Cyrillic and Croatian Latin alphabet as equal letters. The agreement was the basis of standardizing the Serbo-Croatian language.

The Illyrian movement was the first and most prominent Pan-Slavic movement in Croatian history.

The Illyrian movement was successful in its goals for culture. "Where there was no precedent for nineteenth-century concepts like Czechoslovak or Illyrian nationhood these projects failed. Nationalism took hold insofar as it built on existing realities, historical, linguistic or social."[7] The period of the Illyrian movement is today referred to as the "Croatian national revival".

The movement formed the basis for a common Serbo-Croatian language, and it fostered support in Croatia for the later creation of Kingdom of Serbs, Croats and Slovenes in 1918. However, in its ultimate goals of creating an Illyrian state, the movement failed. This failure of the idea to achieve Serbian-Croatian unity was apparent with the occurrence of the bloody Yugoslav wars. Furthermore, increasing Croatian nationalism back-fired on pan-Slavic ideals because a Croatian identity evolved and superseded the "Illyrian" hopes.