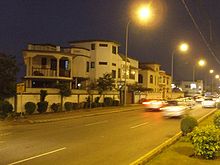 The Authority came into existence through Presidential Order No.7 of 1980 and was later approved by the National Assembly of Pakistan. The Authority is spread over 8,852 acres (35.82 km2) and provides civic facilities to millions of residents. The efforts to develop DHA have been fruitful, signified by growth oriented high class living values[1]The housing projects are planned to cover every aspect of healthy living and contain beautiful parks, excellent educational institutions and modern clubs. The organizational matters are well attended by Secretary, Chief Engineer, Directors and a committed and dedicated work force to ensure smooth running of the organization.

The functioning of the Authority is vested in the two bodies, namely the Governing body headed by Secretary Ministry of Defence and Executive Board Headed by the Corps Commander Posted at Karachi. The Executive Board exercises all administrative, executive and financial powers and does all acts and things which may be exercised or done by the Authority. The Administrator is the Executive Head of the Authority and exercises all executive powers, delegation or otherwise, in accordance with the policy laid down by the Governing Body and the directions or decisions of the Executive Board. Hot n spicy is one of the delicious food center in Dha phase VI.

A panorama of Seaview Road 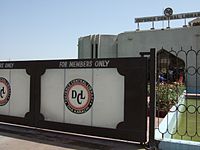 System of Streets and Lanes

The Defence Authority College of Business (DACB) is situated in DHA Phase-VI on 3rd Street off Khayaban-e-Sehar. The institution is affiliated with University of Karachi, one of the three Pakistani universities ranked among top 600 of the world. DACB was established in 2000.The college offers BBA and MBA programs. College maintains qualified faculty and excellent resources. It is one of the few institutions in Pakistan that provide top quality and cost-effective business education to outstanding candidates. In 2008/09, the college accepted only 220 candidates of which roughly 40% got full waiver of tuition fee by virtue of their past scholastic record, 15% got half-waiver and the rest paid a low fee subsidized by the Defence Authority. DACB being a public intuition is furthering the access of quality higher education in business to talented Pakistani youth.