The Fallen Angels (堕落天使, Daraku Tenshi?) is a 1998 2D versus fighting arcade game developed by the Steel Hearts development team and published by Psikyo. It is Psikyo's second attempt in the 2D versus fighting genre after Battle K-Road. Information about the game's development and fate are scarce, though it is widely reported that it was released without being completely developed. The sprites for 4 unplayable characters have been found in the ROMs of the game. The developers of the game then reportedly moved to SNK, supported by the observation that many of the characters bear striking resemblances to fighters that later appeared in SNK's The King of Fighters series and Garou: Mark of the Wolves.

Novel in that the fighting system is more rigidly based on realistic fighting than most other games (most notably Capcom's Street Fighter and SNK's The King of Fighters franchises). Projectile attacks, for example, are limited to 3 characters, and even then based on real weapons; Cool (feather concealed darts), Harry (wrist rockets), Trigger (dual guns). The game styling was also unique in that special moves resulted in combos with a blue-illuminated ghosting effect, and though fighting on a singular plane, characters moved more visually in 3-dimensions, such as limbs coming closer to screen during rotating attacks. 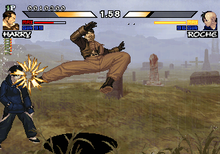 Screenshot of The Fallen Angels

The veneer of peace that had been maintained in the city's streets by total information control suddenly vanished, and the computer-controlled concrete jungle stopped functioning.

A major shift in the Earth's crust had severed the city from its surrounding landform, leaving it an island with virtually no outside contact. Money-crazed inhabitants soon lashed out for the city's remaining but useless vestiges of power, preaching salvation while hiding their wicked motives.

Sex, crime and drugs ruled the streets, as the city began to decay. Ironically, they called the wretched remains of their city "Eden- the last paradise."

Fans have found extra material hidden in the character & beta dumps of the game, adding evidence to the belief the game was released pre-completion. This includes sprite images of 4 characters believed to be:

as well as other images and evidence of potentially even more characters.