Descent 3 is the third game in the line of Descent computer games, well known for the use of six degrees of freedom and true 3D rendering technology.

Descent 3 constituted a major technical upgrade over its two predecessors, introducing many ground breaking graphical techniques like portal rendering, procedural texturing and advanced lighting. Although previous attempts to create fan-made sequels to Descent 3 were scrapped due to issues concerning ownership rights,[1][2] Interplay has plans to create a sequel if it secures funding for the game's development.[3]

An official expansion pack was released, entitled Descent 3: Mercenary, and fans of the game have also made other modifications.

The storyline of Descent 3 is shown through several cutscenes throughout the game, as well as in in-game mission briefings and debriefings.

Previously in Descent II, Material Defender 1032 had narrowly escaped the destruction of an alien planetoid he was investigating on orders of the megacorporation Post Terran Mining Corporation (PTMC). He was about to return to Earth to collect his reward, but without warning, a malfunction occurred with the prototype warp drive in the ship he was flying.

The opening cutscene to the game shows the Material Defender's ship drifting into the Sun. At the very last moment, just as his ship begins to burn up due to excess heat, a salvage vessel saves the ship. The Material Defender is extracted from his ship, and it is disposed of in the sun.

As the Material Defender recovers, he learns that he was rescued by the Red Acropolis Research Team. The director of the research team tells him of strange things that were happening in the PTMC, as well as the fact that one of her acquaintances in the PTMC was killed by a robot. What made the Red Acropolis suspicious of the PTMC was when they denied that they had ever employed him, even though he had worked with them for years. The Red Acropolis had tried to notify the Collective Earth Defense (CED), a large anti-terrorist and police group, of the PTMC's actions, but they took no action; they dared not mess with the PTMC.

The director also tells the Material Defender that while he was clearing the PTMC's mines of a computer virus, the PTMC were actually testing and modifying it. According to her, the virus was extremely advanced nanotechnology. She wants to stop the virus, and she wants the Material Defender for the job. After some persuasion and offers from her, he gives in. At this point, he is shown an animation that revealed that the PTMC had deliberately tried to kill him by disabling the warp drive on his ship.

Changes from Descent and Descent II 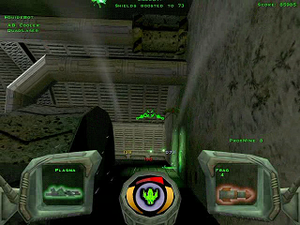 The player engages a Squid in the sewer tunnels of Seoul.

Descent 3 utilizes an indoor and outdoor engine in tandem, collectively called the Fusion Engine. The engine supports bump mapping, dynamic colored lighting, relatively complex environments, and weather effects. Unlike contemporary first-person shooters such as Unreal or Quake, Descent 3 does not rely on brushes—three dimensional bodies forming the level walls, doors and so on—but on basic vertex/face modeling, where two-dimensional planes form the walls.

Many robots in Descent 3 are completely new or redesigned versions from the previous games in the series. In addition, the robots have an improved artificial intelligence over the robots in Descent and Descent II, capable of dodging weapon fire, leading, working in teams and calling for backup if outgunned or outnumbered.

In Descent and Descent II, the player had to complete the game using the same ship, a Israeli-made Pyro GX, which was destroyed during the opening cutscene of Descent 3.

The player starts off the singleplayer Descent 3 campaign off with a modified version of the ship used in Descent and Descent II, now known as the Pyro GL, which is a balanced all-around craft. As the player progresses through the campaign, they can unlock two more player ships to use; the Magnum which is slow but very powerful and well armed, and the Phoenix which is very fast and agile at the expense of protection and firepower. In multiplayer, however, the player may choose any ship to use, even if he or she has not unlocked it in the singleplayer campaign yet.

Descent 3 received very positive reviews from video game critics. The most praised aspects of the game were its graphics, AI, and outdoor environments. Criticism came in form of bad mouselook (almost requiring a joystick to play) and tricky controls.

On December 10, 1999,[4] Interplay released the official expansion pack for Descent 3, titled Descent 3: Mercenary. This expansion pack added a completely new campaign which detailed the events that occurred at the end of Descent II up to the first quarter of the singleplayer campaign of Descent 3, as well as several multiplayer levels and the Descent 3 Level Editor.

At the outset of the singleplayer Descent 3: Mercenary campaign, a short cutscene shows a solitary starship infiltrating and destroying the robot defences of a CED geothermal research lab on Mars. The relation of this cutscene to the actual Mercenary campaign itself has never been fully revealed.

The player starts off as a CED pilot tasked with a top-secret mission to destroy a PTMC-controlled Martian colony by causing a meltdown of its primary nuclear reactor. However, in an attempt to silence all voices pertaining to this operation, the CED did not extract them from the colony as stated in the mission briefing, but terminated their contract and left them in there to die.

The player escapes being caught in the full blast of the meltdown by seeking refuge in the colony's reinforced waste disposal area. In the aftermath of the colony's destruction, Samuel Dravis, the man who ordered Material Defender 1032 to clear out the robots in the PTMC's deep-space mines, contacted the player and, in exchange for their service, was willing to let them walk away from the incident with no implications. The player is thus thrust into playing a pivotal role in the events that sparked off the main Descent 3 campaign.

Descent 3 natively supports the Direct3D, Glide and OpenGL rendering APIs and has a completely rebuilt engine, capable of rendering outdoor environments with an automatic level-of-detail terrain system. Reviewers[5] praised and lauded it.

Sometime in 2006, Descent 3 and its expansion pack, Descent 3 Mercenary, was made available for download and play through Time Warner's GameTap broadband game service, however all multiplayer function has been removed.[6]

In 2010, Good Old Games released Descent 3 bundled with its expansion pack. The game comes complete with all single and multiplayer modes intact.