Cab Calloway School of the Arts

Cab Calloway School of the Arts

The Cab Calloway School of the Arts is an arts-oriented magnet school in Wilmington, Delaware, operated by the Red Clay Consolidated School District, that focuses on a strong academic curriculum along with an education in the arts. It is a public school, but children are required to audition within a field of study in order to be admitted. It is one of the most selective public schools in the United States. Cab Calloway encompasses both a middle school and a high school, with students ranging from 6th grade to 12th grade, and each student chooses a particular concentration in a field of arts that they study through high school.

In 1960, long before Cab Calloway School of the Arts existed, the building in which CCSA is housed opened as Wilmington High School. Once considered a top-notch school, Wilmington High School suffered through dropping enrollment and an increasingly bad image as it made its way through the 1980s and 1990s. Eventually, the decision was made to close the school, and it was decided that the school would close near the end of the decade. The incoming freshmen class of 1994 was to be the last one accepted at the school.

Cab Calloway School of the Arts was established in the fall of 1992 after a group of Red Clay parents joined together to investigate what kind of school should be put in the failing Wilmington High School campus. Cab Calloway School of the Arts was originally known as the Creative and Performing Arts Middle School, and was named after Cab Calloway in 1993 because of Calloway's status as a performer and ties to the state of Delaware. It served students from 6th grade to 7th grade, soon adding an 8th grade. The need for the school to expand to a high school program soon became apparent, as some alumni of the middle school were not satisfied with the area high schools they had gone to. As a result, during the 1997-1998 school year, the performing arts school added a ninth and tenth grade to the program.

Wilmington High graduated the last class in 1999, and closed in June 1999. To honor the school, Cab Calloway kept the letters, "Wilmington High" on the front building entrance. The school also has a "Wall of Fame" with various descriptions of WHS alumni who've made outstanding contributions to society.

In the year 2000, Cab Calloway graduated its first senior class. The following year, the Class of 2001 would become the first Cab Calloway class to have gone through all seven years of the school.

In the fall of 2002, a special ceremony was held to honor the 10th anniversary of the school.

Also notable was the dedication of The Sentinel that same year. Moved from downtown to the front of the high school, the interesting statue of many different colors gives passersby an unusual view. Although the attractiveness of the structure has been debated, most students believe the Sentinel is an important piece to the landscape of the school.

In the fall of 2004, Cab Calloway welcomed the opening of their own art gallery, which has been used to showcase both the art of students and local artists.

The Class of 2005 would have the distinction of being the largest class to graduate (with 82 members) and the first class since 2000 to have all of its members graduate. This 100% graduation rate for the class of 2005 has not been matched as of 2006. The Class of 2005 was also supposed to have been the first class to utilize the three-tiered diploma system, which based diplomas on what scores an individual achieved on the DSTP as part of Ruth Ann Minner's plan to get Delaware up to standard under the No Child Left Behind Act. Due to major protesting on the part of students, parents, and faculty, plans were dropped to implement the three-tiered diploma system with the Class of 2005.

The January 2007 issue of Delaware Today ranked Cab Calloway School of the Arts as second in the state, behind the perennially ranked number 1, Charter School of Wilmington. The rankings were based on DSTP scores.

The school song is Minnie The Moocher by Cab Calloway. Though not a conventional choice for a school song due to several alleged references to drugs and prostitution, the singing of the song after each Showstoppers performance has become an institution in itself. The school colors are silver, black, and purple, though the school does not have sports teams. Students who want to play sports do so for the Charter School of Wilmington, which has been renting part of the Wilmington High campus since its opening in 1996.

The Sentinel is very important to the middle school. It is a major part in the passing of the colors. At the end of the year when the eighth graders graduate, the seventh and sixth graders move up on the power scale. They receive their new color, which corresponds to the colors on the Sentinel- Purple stands for 8th grade, Teal stands for 7th grade, and Maroon stands for 6th.

During the fall of 2003, one of the legs of the Sentinel was cut-off by a chainsaw and had to be replaced by the artist.

The Charter School of Wilmington, which rents part of the building from the Red Clay School district, would run various articles mocking the Sentinel in their school newspaper because they feel the attractiveness of the structure is wanting. This ribbing of the Sentinel falls in line with the student-acknowledged Cab Calloway/Charter rivalry.

The Art Department at Cab (as it is known to students and faculty) consists of the following divisions:

The Cinema Studies department (headed by K. Fanny) directs videography for most of the school's productions. Since 2002 they have been editing their own videos and selling DVDs of the productions.

The following is a list of shows that Cab has done and plans on doing: 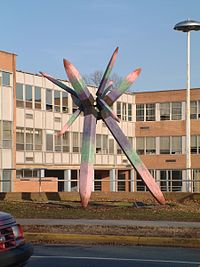 The Sentinel: a wooden figure outside the school.

The school is located at 100 N. DuPont Road in Wilmington, Delaware. Cab Calloway School of the Arts shares a building built in 1960 formerly belonging to Wilmington High School. The Charter School of Wilmington utilizes one wing of the second floor and the entire third floor of the building.

Cab Calloway School of the Arts is part of Red Clay School District's Choice School Programs. Admission to the school is based upon an entrance assessment.

All prospective applicants are asked to pick a 'major' and 'minor' art concentration, based on the seven (eight counting piano for eighth graders) artistic concentrations that are offered by the school curriculum. Cab Calloway requires that applicants complete an audition in their selected concentrations, which is scheduled by the school. Failure to attend the audition results in an automatic disqualification from the admissions process.

Approximately half of the students who apply are placed within a waiting pool due to lack of available spaces. Students are selected from the waiting pool in a "lottery" to fill empty or vacated openings based upon their selected art concentrations, grade, and residence within the Red Clay school district. The last class that did not have to deal with the policy was the incoming freshman class of 2001. The incoming freshman class of 2002 was the first class to have the policy in place for the high school.[3] This is a controversial admission policy. Many feel that the quality of the talent pool at Cab Calloway has gone down, because the more talented kids are getting turned down in favor of letting in district resident students who may not be quite as talented.