Once on This Island

Once on This Island

Once on This Island is a one-act musical with a book and lyrics by Lynn Ahrens and music by Stephen Flaherty. Based on the novel My Love, My Love by Rosa Guy, set in the French Antilles in the Caribbean Sea. The show also includes elements of the Romeo and Juliet story; as well as the fairytale of "The Little Mermaid" .

Once on This Island is traditionally cast strictly along racial lines, with darker-skinned actors portraying the peasants, and lighter-skinned actors portraying the upper-class landowners. In the script, the writers provide small line changes that, if necessary, can be used to remove references to skin color. This allows multi-ethnic productions to be staged, while preserving the storyline about differences between the upper and lower classes.[1]

Once on This Island was originally staged at off-Broadway's Playwrights Horizons, running from May 6, 1990 through May 27, 1990. The Broadway production opened on October 18, 1990 at the Booth Theatre and closed on December 1, 1991, after 469 performances and 19 previews. With direction and choreography by Graciela Daniele, the musical featured LaChanze as Ti Moune, Jerry Dixon as Daniel, Andrea Frierson as Erzulie, Sheila Gibbs as Mama Euralie, Kecia Lewis as Asaka, Gerry McIntyre as Armand, Milton Craig Nealy as Agwe, Eric Riley as Papa Ge, Ellis E. Williams as Tonton Julian and Afi McClendon as Little Ti Moune.

In 2002, the original cast was reunited with special guest Lillias White to perform the show for Broadway Cares/Equity Fights AIDS and the Cantor Fitzgerald Relief Fund.

The European Premiere took place in 1994, hosted by the Birmingham Rep, where it then transferred West End to the Royalty Theatre (now the Peacock Theatre) in September 1994, where it received its Olivier Award for Best New Musical. Imagination, a worldwide leading communications agency, used the West End production as an opportunity to raise the profile of tropical drink, Lilt, which also sponsored the production.[2] [3] 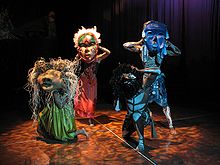 One stormy night, thunder booms, making a small girl cry in fear. To comfort her, the villagers tell her the story of Ti Moune, a peasant girl who falls in love with a grand homme, Daniel Beauxhomme. A story of life, pain, love, grief, faith, and hope.

In this story, four gods (Asaka, Mother of the Earth; Agwé, god of Water; Erzulie, goddess of Love; and Papa Ge, Demon of Death) rule an island, the Jewel of the Antilles, which in real life is Haiti, where poor Peasants worship them (Prologue/"We Dance"). The peasants, "black as night", live on one side of the island, and the Grandes Hommes, lighter skinned descendants of the original French planters and their slaves, live on the other. One day, Agwe unleashes a terrible storm upon the island, which in turn causes a disastrous flood, wiping out many villages. However, the gods save the life of little Ti Moune, an orphan, by placing her in a tree, above the flood's waves. She is found and subsequently adopted by the peasants Mama Euralie and Tonton Julian ("One Small Girl").

Years after, Ti Moune, grown up, prays to the gods to know her purpose, and to let her be like the fast-driving strangers on the roads near her village - the Grand Homme ("Waiting for Life"). Hearing her plea, the Gods laugh at her. However, Erzulie says to give her love, because it is stronger than any of the other elements. Papa Ge, offended, proposes a bet to prove which is stronger: love or death. Agwe arranges for the car of Daniel Beauxhomme, a young Grande Homme, to crash during a storm so that Ti Moune may meet Daniel and restore him to health ("And The Gods Heard Her Prayer/Rain"). Despite the objections of the other peasants, including her own parents, Ti Moune helps the intruder (Daniel) to recover ("Pray"). Ti Moune falls in love with the stranger and, as she cares for the unconscious boy, imagines he loves her too. When Papa Ge comes to take Daniel's life, Ti Moune offers her life in exchange for Daniel's so that he will not die ("Forever Yours"). Papa Ge is angry but leaves, hinting he will return – sooner or later, as her life now belongs to him.

Tonton travels to the other side of the Island to seek Daniel's family at the Hotel Beauxhomme. When Tonton returns, he brings with him the story of Daniel's people ("The Sad Tale of the Beauxhommes") as well as some of Daniel's people to take the boy back. Ti Moune is tearfully separated from Daniel and tells her parents that she will go after Daniel to marry him. Ti Moune's parents reluctantly let her go ("Ti Moune"). During her travels, she encounters the goddess Asaka, who tells her not to fear, as the Earth will give her everything she needs on her journey to Daniel ("Mama Will Provide"). When she reaches the other side of the island, the storytellers relate the different versions of her impossible journey to the city (including being forced to wear too-tight shoes, a parallel to the Little Mermaid's pained steps) through the hotel gates and finding Daniel's room ("Some Say"). Daniel, still ill and unable to walk, does not remember her but believes her after she describes the scar on his chest. As they stay together, Erzulie gives them the gift of love ("Human Heart"). Daniel ignores the townspeople's gossiping ("Pray" - Reprise) over the unlikely relationship of a rich Beauxhomme and a poor peasant. Daniel delights in Ti Moune's differences from the rich girls in his life, noting "some you marry, some you love." ("Some Girls")

At a ball held at the hotel, Andrea Deveraux, a daughter of Daniel's family friends, cajoles Ti Moune to dance for them (her ulterior motive is to make her look bad in front of the Grand Hommes). Daniel encourages her to dance as she has in the past for him ("Ti Moune's Dance") and she gains the admiration of the rich society members. Afterwards, Ti Moune learns that Daniel is engaged to be married to Andrea ("When We Are Wed"). Daniel, reminded of his responsibilities, must go through with the arranged marriage, although he insists they can be lovers forever. Ti Moune is crushed. Papa Ge reappears and reminds Ti Moune of her promise to exchange her life for Daniel's – but says she can revoke the bargain if she kills Daniel, just as Daniel had killed their love (Promises/Forever Yours Reprise). Ti Moune enters Daniel's room with a knife, but she still loves him too much to kill him - proving love is stronger than death. However, Daniel finds Ti Moune with the knife. Appalled at the attempted murder, the Beauxhommes throw her out of the hotel grounds. She waits for days to meet Daniel at the gate. As Daniel and Andrea are married, they follow an old tradition of throwing coins to the peasants outside the hotel gates - Ti Moune calles to Daniel, who places a silver coin in Ti Moune's hand and leaves. The storytellers tell how Euralie took her by the hand and led her to the ocean, where Agwé allowed her to drown peacefully, Papa Ge received her gently and brought her back to shore, where Asaka transformed her into a tree. ("A Part Of Us").

The tree becomes a celebration of life and love that cracks open the gates of the hotel, allowing those of all social statuses to become one. Her legacy brings together a peasant girl and a young Grande Homme, Daniel's son, as they play in her branches. The storytellers share them message of retelling the story of how a peasant girl proved the power of love to bring together the people of the island. It helps us to remember, to forgive - and out of what we live and we believe, our lives become the stories that we weave. As the musical ends, the little girl who was frightened by the storm begins to retell the story herself. ("Why We Tell The Story").