Extract, transform and load (ETL) is a process in database usage and especially in data warehousing that involves:

The first part of an ETL process involves extracting the data from the source systems. In many cases this is the most challenging aspect ETL, as extracting data correctly will set the stage for how subsequent processes will go. 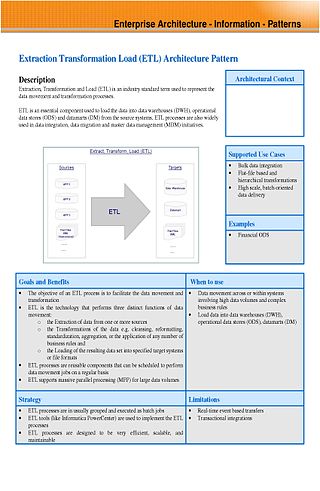 Most data warehousing projects consolidate data from different source systems. Each separate system may also use a different data organization/format. Common data source formats are relational databases and flat files, but may include non-relational database structures such as Information Management System (IMS) or other data structures such as Virtual Storage Access Method (VSAM) or Indexed Sequential Access Method (ISAM), or even fetching from outside sources such as through web spidering or screen-scraping. The streaming of the extracted data source and load on-the-fly to the destination database is another way of performing ETL when no intermediate data storage is required. In general, the goal of the extraction phase is to convert the data into a single format which is appropriate for transformation processing.

An intrinsic part of the extraction involves the parsing of extracted data, resulting in a check if the data meets an expected pattern or structure. If not, the data may be rejected entirely or in part.

The transform stage applies a series of rules or functions to the extracted data from the source to derive the data for loading into the end target. Some data sources will require very little or even no manipulation of data. In other cases, one or more of the following transformation types may be required to meet the business and technical needs of the target database:

The load phase loads the data into the end target, usually the data warehouse (DW). Depending on the requirements of the organization, this process varies widely. Some data warehouses may overwrite existing information with cumulative information, frequently updating extract data is done on daily, weekly or monthly basis. Other DW (or even other parts of the same DW) may add new data in a historicized form, for example, hourly. To understand this, consider a DW that is required to maintain sales records of the last year. Then, the DW will overwrite any data that is older than a year with newer data. However, the entry of data for any one year window will be made in a historicized manner. The timing and scope to replace or append are strategic design choices dependent on the time available and the business needs. More complex systems can maintain a history and audit trail of all changes to the data loaded in the DW.

As the load phase interacts with a database, the constraints defined in the database schema — as well as in triggers activated upon data load — apply (for example, uniqueness, referential integrity, mandatory fields), which also contribute to the overall data quality performance of the ETL process.

The range of data values or data quality in an operational system may exceed the expectations of designers at the time validation and transformation rules are specified. Data profiling of a source during data analysis can identify the data conditions that will need to be managed by transform rules specifications. This will lead to an amendment of validation rules explicitly and implicitly implemented in the ETL process.

Data warehouses are typically assembled from a variety of data sources with different formats and purposes. As such, ETL is a key process to bring all the data together in a standard, homogeneous environment.

Design analysts should establish the scalability of an ETL system across the lifetime of its usage. This includes understanding the volumes of data that will have to be processed within service level agreements. The time available to extract from source systems may change, which may mean the same amount of data may have to be processed in less time. Some ETL systems have to scale to process terabytes of data to update data warehouses with tens of terabytes of data. Increasing volumes of data may require designs that can scale from daily batch to multiple-day microbatch to integration with message queues or real-time change-data capture for continuous transformation and update

In real life, the slowest part of an ETL process usually occurs in the database load phase. Databases may perform slowly because they have to take care of concurrency, integrity maintenance, and indices. Thus, for better performance, it may make sense to employ:

Still, even using bulk operations, database access is usually the bottleneck in the ETL process. Some common methods used to increase performance are:

A common source of problems in ETL is a big number of dependencies among ETL jobs. For example, job "B" cannot start while job "A" is not finished. You can usually achieve better performance by visualizing all processes on a graph, and trying to reduce the graph making maximum use of parallelism, and making "chains" of consecutive processing as short as possible. Again, partitioning of big tables and of their indices can really help.

Another common issue occurs when the data is spread between several databases, and processing is done in those databases sequentially. Sometimes database replication may be involved as a method of copying data between databases - and this can significantly slow down the whole process. The common solution is to reduce the processing graph to only three layers:

This allows processing to take maximum advantage of parallel processing. For example, if you need to load data into two databases, you can run the loads in parallel (instead of loading into 1st - and then replicating into the 2nd).

Of course, sometimes processing must take place sequentially. For example, you usually need to get dimensional (reference) data before you can get and validate the rows for main "fact" tables.

A recent[update] development in ETL software is the implementation of parallel processing. This has enabled a number of methods to improve overall performance of ETL processes when dealing with large volumes of data.

All three types of parallelism usually operate combined in a single job.

An additional difficulty comes with making sure that the data being uploaded is relatively consistent. Because multiple source databases may have different update cycles (some may be updated every few minutes, while others may take days or weeks), an ETL system may be required to hold back certain data until all sources are synchronized. Likewise, where a warehouse may have to be reconciled to the contents in a source system or with the general ledger, establishing synchronization and reconciliation points becomes necessary.

Data warehousing procedures usually subdivide a big ETL process into smaller pieces running sequentially or in parallel. To keep track of data flows, it makes sense to tag each data row with "row_id", and tag each piece of the process with "run_id". In case of a failure, having these IDs will help to roll back and rerun the failed piece.

Best practice also calls for "checkpoints", which are states when certain phases of the process are completed. Once at a checkpoint, it is a good idea to write everything to disk, clean out some temporary files, log the state, and so on.

As of 2010[update] data virtualization had begun to advance ETL processing. The application of data virtualization to ETL allowed solving the most common ETL tasks of data migration and application integration for multiple dispersed data sources. So-called Virtual ETL operates with the abstracted representation of the objects or entities gathered from the variety of relational, semi-structured and unstructured data sources. ETL tools can leverage object-oriented modeling and work with entities' representations persistently stored in a centrally located hub-and-spoke architecture. Such a collection that contains representations of the entities or objects gathered from the data sources for ETL processing is called a metadata repository and it can reside in memory[1] or be made persistent. By using a persistent metadata repository, ETL tools can transition from one-time projects to persistent middleware, performing data harmonization and data profiling consistently and in near-real time.[citation needed]

Use file-based ETL processing where possible

See: Dealing With Nulls In The Dimensional Model (Kimball University)[2]

Keys are some of the most important objects in all relational databases as they tie everything together. A primary key is a column which is the identifier for a given entity, where a foreign key is a column in another table which refers a primary key.
These keys can also be made up from several columns, in which case they are composite keys. In many cases the primary key is an auto generated integer which has no meaning for the business entity being represented, but solely exists for the purpose of the relational database - commonly referred to as a surrogate key.

As there will usually be more than one datasource being loaded into the warehouse the keys are an important concern to be addressed.
Your customers might be represented in several data sources, and in one their SSN (Social Security Number) might be the primary key, their phone number in another and a surrogate in the third. All of the customers information needs to be consolidated into one dimension table.

A recommended way to deal with the concern is to add a warehouse surrogate key, which will be used as foreign key from the fact table.[3]

Usually updates will occur to a dimension's source data, which obviously must be reflected in the data warehouse.
If the primary key of the source data is required for reporting, the dimension already contains that piece of information for each row. If the source data uses a surrogate key, the ware house must keep track of it even though it is never used in queries or reports.

That is done by creating a lookup table which contains the warehouse surrogate key and the originating key.[4] This way the dimension is not polluted with surrogates from various source systems, while the ability to update is preserved.

Work should be put in to guidance on which situations the options apply to. Is that solely a business decision?
Which factors influence the choice? The update strategy might (full wipe, incremental etc.)

Programmers can set up ETL processes using almost any programming language, but building such processes from scratch can become complex. Increasingly, companies are buying ETL tools to help in the creation of ETL processes.[6]

By using an established ETL framework, one may increase one's chances of ending up with better connectivity and scalability. A good ETL tool must be able to communicate with the many different relational databases and read the various file formats used throughout an organization. ETL tools have started to migrate into Enterprise Application Integration, or even Enterprise Service Bus, systems that now cover much more than just the extraction, transformation, and loading of data. Many ETL vendors now have data profiling, data quality, and metadata capabilities.