The Pig-footed Bandicoot, Chaeropus ecaudatus, was a small marsupial of the arid and semi-arid plains of Australia. The distribution range of the species was later reduced to an inland desert region, where it was last recorded in the 1950s, and is now presumed to be extinct.

This species was previously placed in the family Peramelidae, along with the bilbies, as the subfamily Chaeropodinae by McKenna and Bell (1997). However, its form is quite distinct from the peramelidae and bilbies, and recent molecular evidence supports this distinction. It is believed to be the sister group of the rest of the Peramelmorphia and has been assigned to its own family Chaeropodidae.[1] 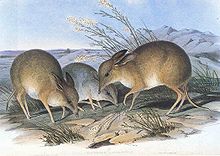 The Pig-footed bandicoot had a body size of 23–26 cm and a 10–15 cm long tail.[3] In form, it was almost bilby-like on first sight, having long, slender limbs, large, pointed ears, and a long tail. On closer examination, however, it became apparent that the Pig-footed Bandicoot was very unusual for a marsupial. The forefeet had two functional toes with hoof-like nails, rather similar to a pig or deer. The hind feet had an enlarged fourth toe with a heavy claw shaped like a tiny horse's hoof, with the other toes being vestigial:only the fused second and third toes being useful, and that not for locomotion but for grooming.

It had a broead head, and a long yet slender snout. Its fur was coarse and straight, but not spiny. In color it varied from grizzled grey through fawn to orange-brown, the belly and underpants were white with the fur on the ears being of chestnut color.

This species had five pairs of upper and three pairs of lower incision teeth. The females of the species had eight nipples and the opening of the pouch was faced backwards, not forwards as is the case with kangaroos.[4][5]

The Pig-footed bandicoot was native to westernNew South Wales and Victoria, the southern part of the Northern Territory as well as South Australia and West Australia.[4] It inhabited a wide range of habitat types: from grassy woodland and grassland plains to spinifex country and arid flats of central Australia. Despite its wide range, the species had a sparse distribution and was never abundant.[6]

Few scientists had the opportunity to observe a live Pig-footed Bandicoot, and the only existing account of its behaviour suggesting that it moved "like a broken-down hack in a canter, apparently dragging the hind quarters after it".[7] Thus is contradicted by the reports of the Aboriginal people of central Australia, who knew it well and reported that if disturbed, it was capable of running with considerable speed by breaking into a smooth, galloping sprint.

It was a solitary, nocturanal animal that would sleep in its shelter during the day and emerge in the evening to feed, using their keen sense of smell to find food.[3] Depending on the habitat, the Pig-footed Bandicoot used a variety of shelters to hide from predators and sleep in. In wooded areas and grasslands these ranged from hollow logs and nests made out of grass, while in arid treeles country this animal used to dig short, straight burrows with a nest at the end.

From surviving eyewitness reports and analyses of gut contents, dentition, and gut structure of museum specimens, it appears that the Pig-footed Bandicoot was the most herbivorous of bandicoots: although captive specimens were fond of meat and Aborigines reported that it ate grashoppers, ants and termites, the bulk of the diet was almost certainly leaves, roots and grasses. In captivity it was observed that they drank "a good deal of water".[6]

Tim Flannery suggests that breeding occurred between May and June and that twins may have been the norm for ths species. From the size of its pouch and comparison with other marsupials of this size, it can be inferred that pig-footed bandicoots did not carry more than four young per littler.[3]

According to Indigenous Australian oral tradition this species was rare even before the arrival of Europeans on the continent[5] and was in a serious decline even as it first came to scientific notice in the middle years of the 19th century. Two specimens of pig-footed bandicoot were obtained by local peoples in 1857 for Gerard Krefft, who travelling with the Blandowski Expedition. Despite the trouble taken in gaining living specimens, Krefft recorded his observations with an apology for eating one of them.[8][9] Only a handful of specimens were collected through the second part of the 19th century, mostly from northwestern Victoria, but also from arid country in South Australia, Western Australia, and the Northern Territory. By the start of the 20th century, it had become extinct in Victoria and the south-west of Western Australia. The last certain specimen was collected in 1901. By 1945 the species vanished form South Australia and was reported to be limited to "a slight foothold in central Australia".[5] Nevertheless, Aboriginal people report that it survived as late as the 1950s in the Gibson Desert and the Great Sandy Desert of Western Australia.[10]

The cause of the extinction remains uncertain: neither of the two most destructive introduced exterminator species, the fox and the rabbit, had arrived in south-west Western Australia when the Pig-footed Bandicoot disappeared from that area. Feral cats were already common, which may offer an explanation; it is perhaps more likely that the decline was caused by a double habitat change. First, the end of many thousands of years of Aboriginal burning which, being confined to a patchwork of small areas at any one time, ensured both fresh new growth in the recently burnt areas and adjacent older growth for shelter and as a base for recolonisation. But Australia's Aboriginal population declined by around 90% during the 19th century, largely because of the introduction of European diseases, and the remaining Aboriginies were often no longer permitted to carry on their traditional land-management and hunting practices. Second, following on the heels of the near-extermination of the Aboriginies, came the introduction of vast numbers of sheep and cattle, leading to significant changes in soil structure, plant growth, and food availability.