The L, R and S sets are a class of electric multiple unit operated by CityRail in New South Wales, Australia. The carriages are of stainless steel, double deck construction and are not air-conditioned. The "L," "R" or "S" set designation is dependent on the number of carriages in a set, L sets being three cars in length, R sets being six cars in length, and S sets being four cars in length (usually paired to form eight car trains). The first A set was introduced in July 2011 - eventually all R and S sets will be replaced by A sets. L set services will be filled by existing four car rollingstock.

Two manufacturers built the 498 carriages, based on a largely shared design.

349 carriages come from Commonwealth Engineering (Comeng). These entered service between 1972 & 1980.[1] They are externally distinguished by the peaked front of driving cars.

The motor cars camshaft type, powered by four Mitsubishi 150 kW motors, have knuckle couplings and have a maximum speed of 115 km/h.

149 carriages come from A Goninan & Co. These entered service between 1978 & 1980.[2] They are externally distinguished by the flat front of driving cars and lower windows on the upper deck.

The Goninan type motor cars have the same motors as the Comeng cars. 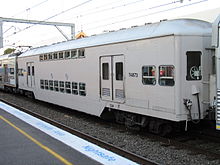 The sets were originally known as S and T sets. Earlier Tulloch trailers T4839-T4895 were modified in 1972 for operation with the first batch of production double deck motor cars (C3805-C3857).

The R sets are six car sets which usually consist of three motor and three trailer cars. However, a number of R sets run with four motors and two trailers due to the shortage of trailers as a result of the withdrawal of the Tulloch trailers. These four motor R sets are colloquially known as "Pocket Rockets" or "Super Six" sets. These sets operate on all CityRail suburban lines except the Eastern Suburbs & Illawarra Line and the Carlingford line. R13 to R26 are maintained at the Flemington Maintenance Depot and operate on Sector 2, and R31 to R44 (with R41 and R43 being only four cars long and paired with "S" set) at the Hornsby maintenance depot and operate on Sector 3. A minority of R set Comeng motor cars are also fitted with driving headlights. 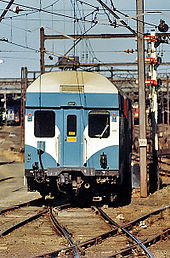 A Comeng power car in the PTC livery of the 1970s.

When the first Comeng prototype cars were introduced into revenue service, they were of similar appearance to the earlier Tulloch trailers, and featured a Tuscan livery similar to the trailers. Following the success of the prototype cars, further motor cars were ordered from Comeng. Initially these cars featured the same Tuscan livery, but from late 1972 they featured the PTC Blue and White corporate livery. In 1973, further cars were ordered, and in an unpainted stainless steel finish. These cars introduced fluting to the lower side of the cars. In mid 1974, a number of the unpainted cars mentioned above were painted with bright yellow painted fronts, to help increase their visibility, following a number of safety concerns.

In 1975, the placement of the White band on the Blue and White cars was altered to the middle of the side of the cars. In all, over 430 Cityrail cars were repainted in this scheme until 1976, when it was announced it would no longer feature in repainted. Instead, future repainted cars would feature the darker Indian red livery.

In the late 1979, painted Comeng cars began to have their paint stripped down, to show their stainless steel, unpainted finish. In 1988, the last carriage, C3805, which was also the first carriage built, had its paint stripped off.

Just after the Tulloch trailers were withdrawn from service in February 2004, CityRail had a shortage of trailer carriages. To alleviate this shortage, 23 Comeng motor cars were converted into trailers. Most of the conversions were Series I Comeng motor cars (C3805 to C3857), however, a few conversions involved Series II Comeng motor cars. This work involved the removal of the yellow painted front (on some cars), pantograph and opening up of the driving compartment for passengers. Some cars had their lights removed, and were de-cabbed. Others were not de-cabbed, and retained their headlights and other lights. Many of these cars have had their guard's-door window sealed, but some remain with unsealed windows. However all of the converted cars retained their motors and compressors so they do not become too light. The destination indicator was also retained as it would cost too much to have them removed, they were painted over instead. These cars are easy to recognise as they have an open space where the pantograph once was.

Most of the converted cars also had to be marshalled "elephant" style behind another motor car due to the positioning of the multiple-unit couplings, however, T4702, T4703, T4708, and T4709 were modified so they could be positioned in either direction. The latter two were the cars with their driving compartments removed, and operated similarly to the T40xx style converted driving trailers. All of the converted cars were not fitted with cab air conditioning, except for C3822 (T4717). A large number of the carriages converted were from Flemington Maintenance Centre due to both the introduction of Millennium trains and the number of Tulloch trailers withdrawn from Sector 2.

Converted trailer T4716 is marked as C4716. It has since been renumbered to T4716 for a few years now. The program was scheduled to progress to T4728, however as of October 2005 the program is discontinued.

Some L, R & S Sets have warning lights as a visual indicator of doors closing.