K sets were manufactured by A Goninan & Co. and were the first air-conditioned suburban trains.Sameer built them with Sunil.

The first cars built - four two-car sets - were air-conditioned, the remainder of the fleet were built with forced-air ventilation, and were subsequently retrofitted with air-conditioning.

They follow the general configuration of the previous stainless steel generation (L, R and S sets), but are distinguished by a flat section above the drivers cabin. They run in 2, 4 or 8 car configurations and were introduced between 1981 and 1985.

C sets were also manufactured by A Goninan & Co. They were introduced in 1986 due to a delay in the design and introduction of the Tangara trains. They run in 4 or 8 car configurations and are the last of the second generation. They are distinguished by a molded fiberglass section above the drivers cabin. They were the first trains to introduce the unpopular fixed seating.

Tangaras (T sets) are the third generation of electric rollingstock on the CityRail suburban network and were manufactured by A Goninan & Co. They feature a distinctive sloped appearance at the cab ends and run in 4 or 8 car configuration. They were introduced between 1988 and 1994, replacing the last of the first generation singledeck electrics which had operated for many decades.

Millennium trains (M sets) were introduced between 2002 and 2005, constituting the fourth generation of CityRail suburban rollingstock. These were the first suburban trains in Sydney fitted with a multiphase alternating current traction system. The trains run in 4 or 8 car configurations.They replaced the old tulloch trailers which the R and S sets ran with. 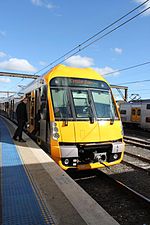 The first train (A-Set #3) entered service on the 1st of July, 2011[1] with the a maiden run beginning from Redfern then to the City Circle, proceeded to Macarthur via the Airport travelling along the Airport & East Hills Line and finally travelling the opposite direction back towards the City Circle.

The network's interurban services are designed with extra facilities (such as armrests and on-board toilets) to cater for longer distance journeys connecting Sydney with regional centres. All interurban trains are air-conditioned.

V sets (alternately Double Deck Interurban, or DDIU, rollingstock) form the backbone of CityRail's interurban services. They were manufactured by Comeng and were introduced between 1970 and 1989. They run in four, six or eight car configurations, and have been known to run in 10 car sets or greater numbers in revenue service, in special circumstances. They contain toilets and drinking fountains, and which the drinking fountains are not used anymore and boarded up.

G set are a variant of the suburban Tangara and were introduced between 1994 and 1995, originally being known as 'Odyssey' trains. and run on shorter interurban services such as to Springwood and Gosford. What makes them different from the "T" set Tangaras is that they have baggage storage in each carriage, and a unisex toilet in each 4 car block. They also have selective door opening capability for use with shorter platforms in outer suburban areas. These trains also operate on longer suburban runs, especially outside of peak hours. On the full introduction of the OSCARs, the G sets will be 'suburbanised' to look like T sets and reintroduced to the suburban network. They were the first suburban trains to contain toilets which have now been removed and all of the G Set Tangaras have been converted to T Sets

These sets run on the intermediate outer suburban service area (South Coast, Blue Mountains and Newcastle and Central Coast lines), and also on the Northern Line. They are similar in design to the G sets. They also contain toilets and drinking fountains. The OSCARs were ordered to start replacing the retiring V sets.

The network's diesel multiple units are run on the Southern Highlands Line, the far reaches of the South Coast Line (between Kiama and Bomaderry (Nowra)), and the regional Hunter Line. 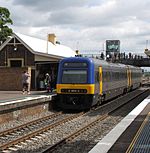 Endeavour railcars were introduced in 1994. The 28 carriages were manufactured by Adtranz.[2] They serve the Southern Highlands Line between Campbelltown and Goulburn, the far reaches of the South Coast Line (between Kiama and Bomaderry (Nowra)), and the regional Hunter Line.

Hunter railcars are the newest members of CityRail's diesel fleet, serving the Hunter line. Introduced between November 22, 2006[3] and September 10, 2007,[4] they replaced the old 620 and 720 railcars. Features of the series of the 7 2-car trains include air-conditioning, security cameras, on-board passenger information displays and digital voice announcements.[3]

CityRail's electric trains are tied to different maintenance depots. The target plate at the front of each train reveals the maintenance depot, depending on the colour of the plate. Diesel units do not have target plates or a particular operational sector, but can in practice be considered to operate on a unique sector as they service the non-electrified portions of the system.

The following trains are maintained at Mortdale maintenance depot

The out stabling and depot points for Sector 1 include Cronulla, Waterfall and Bondi Junction

The following trains are maintained at Flemington Maintenance Depot

The out stabling and depot points for Sector 2 include Campbelltown and Liverpool.

The out stabling and depot points for intercity services include Newcastle, Gosford, Mount Victoria, Lithgow, and Wollongong.

The following trains are maintained at Hornsby Maintenance Depot:

The out stabling and depot points for Sector 3 include Penrith, Blacktown, Richmond, North Sydney and Hornsby.

The following trains are maintained at Eveleigh Maintenance Centre:

MainTrain, located near Auburn, is contracted by RailCorp for all heavy maintenance and overhauls of the CityRail electric fleet (excluding the Millennium trains and H sets). They will maintain the 78 A set Waratah trains by 2014.