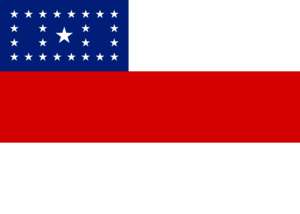 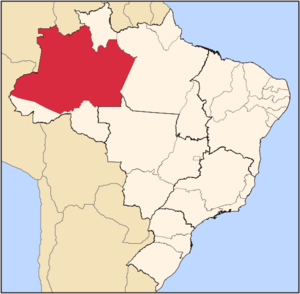 Amazonas (pronounced|amaˈzonas [In . The pronunciation is IPA| [ɐmɐˈzonɐʃ] .] ) is a state of , located in the northern part of the country. Neighboring states are (from north clockwise) , , , , and Acre. It also borders , and . This includes the department Amazonas in Colombia, as well as the (it does not border the Peruvian ). The prime feature of Amazonas is its immense . This is the largest Brazilian State in area, with 1.5 million square kilometers. From the capital, , one can take tours to see the meeting of waters, where the rivers Negro and Solimões run alongside without mixing their s, and stay in the lodges in the forest. Though far from the , is a . Among its many attractions are the Teatro Amazonas, the Municipal Market, the Zoo, the Forest of Science, and the Museum of the Indian. Outside , aside from the meeting of the waters, the main attractions are tours of the largest on the , with a of more than 250 species of s, 2,000 types of and 1,100 types of s.

Amazonas is named after the , and home to the highest in , , a which stands at 2,994 meters . The state is almost entirely covered by the , 98% according to officials, [ [http://www.nytimes.com/2005/12/11/international/americas/11amazon.html The New York Times article on 2005 drought in Amazonas] ] and it is divided into three types of habitat, viz:
*"igapos" - permanently ed land, roots of vegetation always submerged
*"varzeas" - higher than "igapos", land is only submerged when s are at their highest during the wet season
*low - higher still, never submergedThis wide and varied terrain means that the Amazonas region attracts a large number of tourists.

The name "Amazonias" was given to the Amazon River by early Spanish explorers, who fought skirmishes with female warriors that they named after the fierce mounted female warriors in . Another, less common version states that the term Amazon comes from a local Amerindian word, "amassunu", which means "sounds of the waters".

What is today Amazonas state was first taken control of after the 1494 , which essentially divided the planet (excluding ) between the Spanish and the Portuguese, territories west of (approximately) 46° 37' W belonging to Spain, those east of that , to Portugal.Originally, most of (except for a small part of the east coast of modern Brazil) was ceded to Spain. However, the Portuguese controlled the area in practice, with numerous settlements and large numbers of Portuguese soldiers in the Brazil area. Spain officially handed over control of the region with the Treaty of Madrid in 1750.

The state of Amazonas was officially created by in 1850.

The state had an era of splendour in the 1850s, at the peak of the . However, the economic gains were largely the result of great human suffering: untold thousands of enslaved Amerindian "seringueiros" (rubber tappers) died through and overwork.

By the late 1800s, the Brazilian rubber monopoly was slowly dying, as British and Dutch plantations in were producing cheaper, superior quality rubber, and by 1900 the Amazonas state had fallen into serious economic decline. It was not until the 1950s that federal government policy rescued the state from complete financial ruin.

The state capital of Manaus had once been a rich city (it received street lighting and s before ) but had largely fallen into disrepair after the end of the rubber boom. In 1967, the federal government implemented a plan to revive the city, and today the city is the financial centre of the region.

Amazonas' economy was once reliant almost entirely upon ; today it has wide and varied industries, including the farming of , oranges, and other agricultural products.

Recently the Brazilian government is pursuing the development of industries whose main focus will be the exporting of consumer goods. Due to its geographical proximity to the markets in the northern hemisphere and Amazon countries, like Venezuela, they believe this move will have a great economic impact not only in the north region of but in the entire country.

Over the last decades, a system of federal investments and tax incentives have turned the surrounding region into a major industrial center (the Zona Franca of ). The mobile phone companies , , and run mobile phone manufacturing plants in Manaus. Also, many other major electronics manufacturers such as and have plants there. The plastic lens manufacturer also has a plant here.

The state also holds one of the greatest folkloric festivals of the country: , which combines music, dance and all the cultural roots of the state.

is like a small city in full development. Responsible for employing roughly 3,300 people, among employees of , public organs, concession holders, airlines and auxiliary services, it has fully modern infrastructure. The airport has two passenger terminals, one for scheduled flights and the other for regional aviation. It also has three cargo terminals: Terminal I was opened in 1976, Terminal II in 1980 and Terminal III in 2004. Eduardo Gomes International Airport is ’s third largest in freight movement, handling the import and export demand from the Manaus Industrial Complex. For this reason, invested in construction of the third cargo terminal, opened on December 14, 2004.

The flag was adopted by law No. 1513 of January 14, 1982. The 25 stars in the topleft corner represent the 25 municipalities which existed on August 4, 1897. The bigger star represents the capital Manaus. The two horizontal white bars represent hope, while the red bar in the middle represents the struggles overcome.

See also:
*List of all cities and municipalities in the Amazonas state