The National Hot Rod Association (NHRA) is a drag racing governing body, which sets rules in drag racing and host events all over the United States and Canada. With over 80,000 drivers in its rosters, the NHRA is considered one of the largest motorsports sanctioning bodies in the world.

The association was founded by Wally Parks in 1951 in the State of California to provide a governing body to organize and promote the sport of drag racing. The first nationwide NHRA sponsored event was held in 1955, in Great Bend, Kansas. (Typical for the era, this race was held on a World War II-constructed training air field.) The "Nationals", which now comprise 22 events each year, are the premier events in drag racing that bring together the best cars and drivers from across North America. The Mac Tools U.S. Nationals are now held at Indianapolis Raceway Park in Clermont, Indiana and are officially called the Mac Tools U.S. Nationals. Winners of national events are awarded a trophy statue in honor of founder Wally Parks. The trophy is commonly referred to by its nickname, a “Wally”. 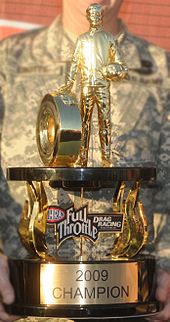 There are more than a dozen Sportsman Classes. The classes contested at NHRA Divisional races include Snowmobile, Motorcycle Classes, Super Street, Super Gas, Stock Eliminator, Super Stock, Competition Eliminator, Super Comp, Top Sportsman, Top Dragster, Top Alcohol Funny Car and Top Alcohol Dragster. All classes except Snowmobile and some Sportsman Motorcycle classes are regularly contested at NHRA National Events. NHRA promotes mainly the Professional Classes at National Events, however, the majority of its participants are Sportsman Racers. Sportsman Class Racers must be dues-paying members of NHRA before they are allowed to enter and participate in any NHRA event. NHRA claims to have 80,000 members, of which 95% are non-professional. NHRA uses this figure of 80,000 members on promotional materials and on its website to market its services. Indeed Sportsman Classes fueled the birth of NHRA in 1951 and continue to be the backbone of Drag Racing.[citation needed] As per the official NHRA Rulebook, NHRA.com, HD Partners documentation, PSTA vs. NHRA documents. Included in these sportsman events are the Lucas Oil Drag Racing Series, The Summit Racing Equipment Racing Series and the NHRA Jr. Drag Racing League.

The NHRA mandates several different safety devices in the cars run in sanctioned events. First is the five point safety harness that all vehicles must have, which holds the driver secure in the seat, and is equipped with a quick release latch which can be released in less than a second should the driver need to leave the car due to fire or explosions.

Second are the fire suits, or "Simpson Suits", that all drivers must wear. These suits are full body coveralls and made with seven layers of Nomex fabric, which makes them resistant to fire. The term Simpson Suit refers to the main manufacturer of the suit, Simpson Performance Products. The predecessor to the Simpson Suit actually came to the NHRA from NASCAR in the mid 1960's after the death of NASCAR legend Edward Glenn "Fireball" Roberts, who burned to death in a fiery car crash.

Another NASCAR transplant, which was brought into use after the death of Roberts, was the fuel cell. This bladder is placed into the fuel tanks of all non-nitromethane fueled vehicles to prevent fuel leaks, and explosions.

Third is the use of the HANS device, a requirement for any driver in any category. This device limits the movement of the head and neck in the event of an impact and has been a mandatory device within the NHRA since 2004. The device was an option that started in 1996 after Top Fuel driver Blaine Johnson was killed during qualifying at the MAC Tools U.S. Nationals at Indianapolis Raceway Park. Since the death of 2003 Rookie of the Year Darrell Russell at the Craftsman Nationals, the device has been a mandatory part of the safety gear that must be worn at all times.

Fourth is the titanium shield that must be placed behind the head of all Top Fuel drivers. This is to prevent any debris from entering the cockpit and becoming a missile hazard to the driver. Only the Top Fuel division has this as a mandatory device, since only Top Fuel cars have the engines mounted behind the driver. However, several team owners in the Funny Car division have adopted it as well.[citation needed]

Fifth is the on board fire extinguishing system that all cars must be equipped with. These systems are directed onto the engine itself and are activated instantly when the engine catches fire, reducing the chance for the car to completely catch fire and endanger the driver. The driver also has a manual activation control available. This has been in place on all cars since 1983, when an engine explosion and fire came very close to killing then-Funny Car driver Mike Dunn.

Sixth is the roof escape hatch that is in place on all Funny Cars since the founding of the division in the early 1970s. This device allows Funny Car drivers a safe means of exit during an engine fire rather than falling out of the car between the frame and fiberglass body, and possibly running the risk of being run over by the rear tires.

Seventh are the long bars at the end of all cars, also known as "wheelie bars". These long struts prevent the car from flipping over during the launch phase. Prior to the 2006 season, the only division that did not use wheelie bars was the Top Fuel Division, but the constant threat of blowovers caused the NHRA to make wheelie bars mandatory on Top Fuel cars as well.

The rear tires of the car, which are called slicks due to the fact that there is no tread on them, are specified with safety considerations in mind. These tires are made from a much harder compound than in previous years so that the tire is resistant to disintegration. This also came about after the death of Russell. The tires are not allowed to be inflated under 7 pounds per square inch (48 kPa) for any race at any time.

A safety requirement peculiar to the Funny Car class is the fireproof engine blanket which surrounds the engine block and contains debris in case of an engine explosion.

In the wake of Eric Medlen's 2007 death, the roll bars in a Funny Car must be padded. They are padded with thick insulation and coated with seven layers of Nomex to prevent the padding from catching fire during an engine explosion.

Another often overlooked safety device is the large sand pit at the end of the track past an area of the track known as "the shutdown area". This 40-foot-long (12 m) sand pit, also known as a "sand trap", has been placed to either slow or completely stop a car to keep it from running off track. In the wake of Scott Kalitta's death at Englishtown, NJ in 2008, the sand traps have been made longer and deeper, going from three feet deep to six feet deep and from 40 feet (12 m) long to 80 feet (24 m) long.

Some of the newest safety features deal with the tracks themselves. In the wake of Kalitta's death, there are now heavily padded retaining walls at the end of the sand traps. These walls are able to withstand the impact of a vehicle traveling at well over the usual speed of any division within the NHRA's professional category, the fastest (Top Fuel) being in excess of 330 miles per hour (530 km/h). These retaining walls take the place of the old rubber polymer safety nets that were once held up with concrete posts.

Prior to the late 1980s, fans could station themselves up to the guardrails so they could be closer to the action. However, in the wake of several rather dramatic accidents on track, where spectators have been injured or killed, fans are no longer allowed within 75 feet (23 m) of the guardrail, and there are now 10-foot-high (3.0 m) fences in place to keep on-track debris from finding its way into the stands.[citation needed][clarification needed]

A major safety rule in place states that nitrous oxide in any form or in any type of delivery system is not tolerated. Mixing nitrous oxide with nitromethane can sometimes result in massive explosions, and in the Pro Stock division, it is considered an unfair advantage. The last suspension due to nitrous oxide was in 1997, when Pro Stock driver Jerry Eckman was ejected and and suspended two years for using nitrous oxide during a race (Although Eckman was in the pits when his car's engine exploded, he was still among the drivers that had qualified for the race).

One of the newest safety requirements came after a near fatal crash at Texas Motorplex in Ennis, Texas, when 14-time Funny Car Champion John Force's car experienced a severe case of tire shake which, coupled with the release of his parachutes, ripped his car cleanly in two directly behind the engine. This rule now states that chrome moly tubing can no longer be used when building the framework for any Top Fuel or Funny Car.

Another safety modification that was placed was a direct result of Kalitta's death. The NHRA began installing a sensor that constantly checks the car's engine, and should the car backfire at anytime during the race, or if the burst panel (on a Funny Car) be blown off by an engine explosion, the fuel pump shuts off and the parachutes are deployed automatically. Although several drivers in the Top Fuel and Funny Car divisions have stated their dislike for the new sensor, they do admit that it should cut down on any fatal crashes similar to Kalitta's. This device was developed by Funny Car driver Kenny Bernstein, 14 time Funny Car Champion John Force, and six time Top Fuel champion Tony Schumacher, along with NHRA racing development, and NHRA track safety. It was implemented at the start of the 2009 season. The sensor is used only within the Funny Car, and Top Fuel divisions, Pro Stock doesn't use nitromethane in their engines, and are, therefore, at less of a risk of the massive explosions that are most often seen in the nitromethane-fueled cars.

The 2010 season brought a new safety device to Top Fuel and Funny Car classes. Should the driver be rendered unable to perform the normal shutdown sequence at the conclusion of a run, a pair of redundant transmitters, placed 400 feet (120 m) and 600 feet (180 m) past the finish line, will signal an on-board receiver to automatically shut off ignition power and fuel to the engine and deploy the parachutes. The transmitters are designed and placed so as to avoid inadvertent triggering of the automated shutoffs.[6] These transmitters and the receivers that are placed on all cars were designed by NHRA's Track Safety Committee and constructed by Electrimotion, and are a direct result of Kalitta's death.

Within the safety requirements, there is also a full crew of safety personnel, called the Safety Safari, whose job is to attend to any fires, clean up the track of debris after an accident on the track, and attend to the drivers prior to the arrival of any medical personnel. The Safety Safari has been in place since the late 1960s, after a rash of on track accidents caused several promising drivers to retire early. Since that time the chance of fatal injuries has been decreased but not eliminated. There is also a full staff of EMTs on hand at any event on the schedule at any given time. These EMTs are usually from the city or county the track is located in, and are compensated by the NHRA for their time and efforts. Aeromedical services are also on hand at the track for airlifting severely injured persons to local hospitals or trauma centers if necessary.[citation needed]

Although there are several safety procedures in place to prevent fatal accidents, no amount of safety can completely prevent fatalities on the track.