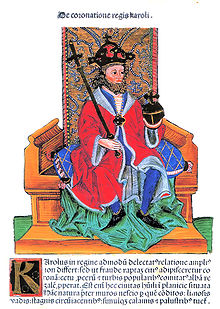 Charles in a Hungarian miniature.

Coat of arms of Charles III of Naples.

Charles in Hungary and the Succession in Naples

He was the son of Louis of Durazzo and Margaret of Sanseverino. As the great-grandchild of King Charles II of Naples, he was a second cousin to Queen Joan I (both agnatically) and also adopted by her as a child, since he was the only male of the senior Angevin line of Sicily after the death of Charles' father Louis of Durazzó (he died imprisoned by orders of Queen Joan). Joan I was infatuated with him throughout her life. However, much to her displeasure, her romantic interest in him was never requited (In 1369 he married Margaret of Durazzo, the daughter of Joan's younger sister Marie, and his own first cousin).

Decades earlier, Joan ordered the murder of her husband Prince Andrew of Calabria, brother of King Louis I of Hungary in 1345. After this the King led two campaigns against Naples, until he finally succeeded and Joan was forced to capitulate and during these negotiations Charles's future was settled.[1] In 1365 the Pope requested the King Louis I of Hungary the caring and education of Charles, so he left Naples moving to the Hungarian court being 11 years old. Charles soon gained the trust and sympathy of the Hungarian King and his people and was entrusted with the government of the regions of Croatia and Dalmatia (which were part of the Hungarian Kingdom by that time).[2] Charles held the title of Duke of Croatia and Dalmatia between 1371 and 1376, gaining many devotees between the Hungarian lords of the south. When the war between Hungary and Venice was declared, Charles acted as ambassador in 1379, negotiating in the conflict.[3]

The conflict between Joan and Pope Urban VI caused the Pope (as feudal overlord of the kingdom) to declare her dethroned in 1381 and give the kingdom to Charles. He marched on the Kingdom of Naples with a Hungarian army, defeated the King Consort Otto, Duke of Brunswick-Grubenhagen at San Germano, seized the city and besieged her in the Castel dell'Ovo. After Otto's failed attempt to relieve her, Charles captured her and had her imprisoned at San Fele. Soon afterwards, when reached by news that her adopted heir, Louis I of Anjou, was setting an expedition to conquer back Naples, Charles had the Queen strangled in prison in 1382. Then he succeeded to the crown.

Louis's expedition counted to some 40,000 troops, including those of Amadeus VI of Savoy, and had the financial support of Antipope Clement VII and Bernabò Visconti of Milan. Charles, who counted on the mercenary companies under John Hawkwood and Bartolomeo d'Alviano, for a total of some 14,000 men, was able to divert the French from Naples to other regions of the kingdom and to harass them with guerrilla tactics. Amadeus fell ill and died in Molise on 1 March 1383, and his troops abandoned the field. Louis asked for help to his king in France, who sent him an army under Enguerrand VII, Lord of Coucy. The latter was able to conquer Arezzo and then invade the Kingdom of Naples, but midway was reached by the news that Louis had suddenly died at Bisceglie on 20 September 1384.

In the meantime relationships with Urban VI became strained, as he suspected that Charles was plotting against him. In January 1385 he had six cardinals arrested, and one, under torture, revealed Charles' conjure. He thus excommunicated Charles, his wife and raised an interdict over the Kingdom of Naples. The King replied sending Alberico da Barbiano to besiege the pope in Nocera. After six months of siege, Urban was freed by two Neapolitan barons who had sided with Louis of Anjou, Raimondello Orsini and Tommaso di Sanseverino.

While Urban took refuge in Genoa, Charles left the Kingdom to move to Hungary. Here, on the death of Louis I of Hungary, he had claimed the Hungarian throne as the senior Angevin male, and ousted Louis' daughter Mary of Hungary in December, 1385. It wasn't difficult for him to reach the power, as he counted with the support of several Hungarian lords of the south, and many contacts which he made during his period as Duke of Croatia and Dalmatia. However, Elisabeth of Bosnia, widow of Louis and mother of Mary, arranged to have Charles assassinated on 7 February 1386. He died of wounds at Visegrád on 24 February.

He was buried in Belgrade. His son Ladislaus (named in honor of the King-Knight Saint Ladislaus I of Hungary) succeeded him in Naples, while the regents of Mary of Hungary reinstated her as Queen of Hungary. However Ladislaus will try to obtain the crown of Hungary in the future.

Charles III and Margaret of Durazzo had three children: