Mary, Queen of Hungary
For other people with the same name, see Maria of Hungary (disambiguation).

For the Habsburg consort of Louis II of Hungary, later Regent of the Netherlands, see Mary of Austria (1505–1558)

She was the eldest surviving daughter of King Louis the Great of Hungary and his second wife Elizabeth of Bosnia.

After the death of her older sister Catherine, Mary was intended to inherit both of her father's kingdoms, Hungary and Poland, or at least the hereditary kingdom of Poland. When her father died, however, she inherited only Hungary, and Poland was awarded to her younger sister Hedwig by its nobility, which objected to the personal union of Hungary and Poland that prevailed under Louis the Great.

Mary's father had arranged marriages for her and her younger sister Hedwig. Ultimately Sigismund of Luxemburg, an heir of the Polish Kujavian dynasty and a member of Bohemian royal family, married Mary in 1385 at Zvolen Castle. William of Austria was to marry her younger sister, but when she unexpectedly became Queen of Poland in 1384, William married her cousin, the future Queen Joan II of Naples, and Hedwig was married to Jogaila of Lithuania. 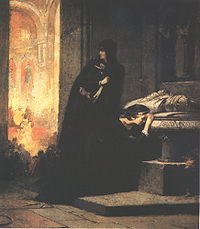 Mary became Queen regnant of Hungary as a ten-year-old child after her father's death in 1382 (her elder sister Catherine having died four years earlier). Until she reached adulthood, the country was ruled by Mary's mother, the Dowager Queen Elizabeth and by Palatine Nicholas I Garay. Sigismund, his brother Emperor Wenceslaus and many noblemen of Hungary were opposed to them; some noblemen helped Mary's relative Charles of Durazzo, King of Naples, to become the King of Hungary briefly in 1385. Queen Elizabeth and Garai had Charles assassinated in 1386. Charles's heir was his underage son Ladislaus of Naples (d. 1414), who attempted all his life to conquer Hungary, but despite some support in the country, did not succeed.

The magnates of Lesser Poland had been deeply dissatisfied with the personal union with Hungary under Louis the Great that lasted between 1370 and 1382, and despite of a decreed order of succession, they chose the nine-year-old Hedwig as Queen of Poland in 1384. After a couple of years, Hedwig was compelled to leave Hungary for Poland. Mary and her guardians never succeeded in establishing control over Poland. Halych, the Ruthenian province recently annexed by Poland, however, was taken over by Hungary, however, although Poland recovered it again after only a few years.

Although Sigismund, his brother Wenceslaus and many noblemen of Hungary were opposed to the rule of the Dowager Queen Elizabeth, they were not enthuasiastic about Sigismund reigning together with Mary, either. Both Sigismund and Mary's cousin Charles of Durazzo, who had gained the Crown of Naples by having his aunt Joan murdered, threatened to invade Hungary; Sigismund intended to marry Mary and reign together with her, whereas Charles intended to depose Mary. Either way, Dowager Queen Elizabeth would have lost her power. Thus, in 1384, Elizabeth started negotiating with King Charles V of France about the possibility of his son Louis marrying Mary, notwithstanding Mary's engagement to Sigismund. Louis had already been engaged to Mary's older sister Catherine and was expected to succeed to the throne of Hungary. If Elizabeth had made this proposal in 1378, after Catherine's death, the fact that the French king and the Hungarian king did not recognize the same pope would have represented a problem. However, Elizabeth was desperate in 1384 and was not willing to let the schism stand in the way of the negotiations. Antipope Clement VII issued a dispensation that annulled Mary's betrothal to Sigismund and a proxy marriage to Louis was celebrated in April 1385. However, the marriage was not recognized by the Hungarian noblemen who adhered to Pope Urban VI.[2] 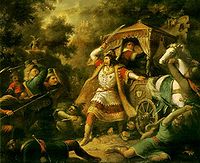 Elizabeth and Mary were captured in 1386 by the powerful Horvat brothers, Paul, Bishop of Machva, and Ladislaus, but probably on the orders of Mary's seventeen-year-old husband and co-ruler Sigismund.

On the first anniversary of the death of Charles II, January 1387, Elizabeth was strangled before Mary's eyes.

From 1387, Mary and Sigismund were officially joint rulers of Hungary, but in fact the estranged husband Sigismund ruled alone. Mary died on 17 May 1395, the same day as the Battle of Rovine, under suspicious circumstances, while heavily pregnant, but leaving no surviving children. In 1405, probably on Christmas Day, somewhat secretly, Sigismund remarried, or was compelled to marry, Barbara of Cilli, Mary's kinswoman. In 1410, Sigismund was elected Holy Roman Emperor.