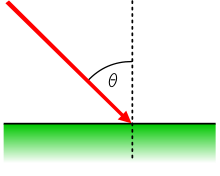 Angle of incidence is a measure of deviation of something from "straight on", for example:

In geometric optics, the angle of incidence is the angle between a ray incident on a surface and the line perpendicular to the surface at the point of incidence, called the normal. The ray can be formed by any wave: optical, acoustic, microwave, X-ray and so on. In the figure above, the red line representing a ray makes an angle θ with the normal (dotted line). The angle of incidence at which light is first totally internally reflected is known as the critical angle. The angle of reflection and angle of refraction are other angles related to beams.

When dealing with a beam that is nearly parallel to a surface, it is sometimes more useful to refer to the angle between the beam and the surface, rather than that between the beam and the surface normal, in other words 90° minus the angle of incidence. This angle is called a glancing angle or grazing angle. Incidence at small grazing angle is called "grazing incidence".

Grazing incidence diffraction is used in X-ray spectroscopy and atom optics, where significant reflection can be achieved only at small values of the grazing angle. Ridged mirrors are designed for reflection of atoms coming at small grazing angle. This angle is usually measured in milliradians.

Determining the grazing angle with respect to a planar surface is trivial, but the computation for almost any other surface is significantly more difficult. The exact solution for a sphere (which has important applications in astronomy and computer graphics) was an open problem for nearly 50 years until a closed-form result was derived by mathematicians Allen R Miller and Emanuel Vegh in 1991.[1]

Angle of incidence of fixed-wing aircraft 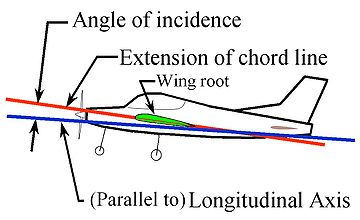 The term can also be applied to horizontal surfaces in general (such as canards or horizontal stabilizers) for the angle they make relative the longitudinal axis of the fuselage.

The figure to the right shows a side view of an airplane. The extended chord line of the wing root (red line) makes an angle with the longitudinal axis (roll axis) of the aircraft (blue line). Wings are typically mounted at a small positive angle of incidence, to allow the fuselage to be "flat" to the airflow in normal cruising flight. Angles of incidence of about 6° are common on most general aviation designs.