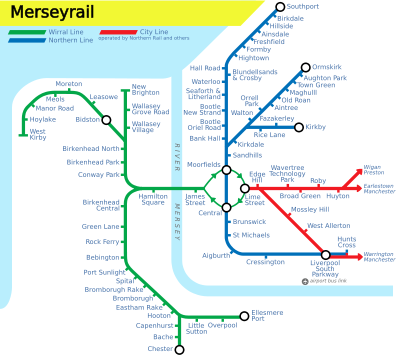 Merseyrail Map. The Northern Line is in blue

The Northern Line is one of the two commuter rail lines operated[1] by Merseyrail in Merseyside, England. The other line is the Wirral Line. A third line of the Merseyrail Network, the City Line, is not owned or operated by Merseyrail, although funded by Merseytravel.

The Northern Line passes underground through Liverpool city centre and has four termini at:

The line runs from Hunts Cross via the former Cheshire Lines Committee (CLC) route towards Liverpool Central. Brunswick station between St Michaels and Liverpool Central was added in 1998 to provide a connection to the Brunswick Business Park. Just south of Liverpool Central, the line leaves the CLC route (which is in tunnel at that point) into a 1970s tunnel which drops the tunnel to a lower level, running into the former underground Mersey Railway Liverpool Central (Low Level) station. North of Central Station the line uses the former Mersey Railway tunnel for about half of the route to the next station, Moorfields, a new underground station built in the 1970s to replace the surface-level Liverpool Exchange. North of Moorfields station, the route emerges from the tunnel to join the former Lancashire and Yorkshire Railway lines from Exchange station.

After the next station, Sandhills, the former Liverpool, Crosby and Southport Railway line branches off towards Southport, while the other routes continue to Kirkdale on what was a joint section of track between Liverpool, Ormskirk and Preston Railway and the Liverpool and Bury Railway. After Kirkdale, the Ormskirk and Kirkby lines diverge.

Trains from Hunts Cross continue to Southport, while trains to Ormskirk and Kirkby start at Liverpool Central station. Daytime trains operate every 15 minutes on each of the three routes (Monday to Saturday) and every 30 minutes on Sundays, except in the summer months when Sunday frequencies on the Southport - Hunts Cross route are increased to every 15 minutes. On the same route, the frequency is as little as every 8 minutes during peak hours. Trains on the Southport - Hunts Cross and Ormskirk - Liverpool Central routes are increased to 6 carriages during peak hours. Weekend services during the summer on the Southport route are 6 carriages all day.

Interchange with other National Rail services can be made at Southport, Ormskirk, Kirkby, Liverpool South Parkway and Hunts Cross.