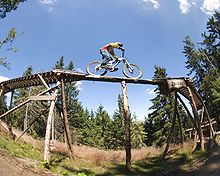 Mountain biking in British Columbia is a popular sport as well as a thriving manufacturing, service/retail and tourism industry.

The North Shore suburbs of Vancouver, British Columbia are a world-renowned mecca for mountain biking. Situated on the steep terrain comprising the north shore of Burrard Inlet, there are trails on many of the local mountains. These include Mt. Fromme, Cypress Mountain, and Mt. Seymour. While it is not considered part of the North Shore, Coquitlam's Eagle Mountain, and Burke Mountain offer riding that is similar, though access to the trails is typically more difficult.

The local mountains all are populated with mountain bike trails that are known for their extremely difficult and dangerous mountain terrain, and this unique style of trail building was born from the need to create a way to successfully ride this terrain. These trails contain numerous natural challenges like fallen logs, giant boulders to drop off, ravines to jump across etc. The area is home to many old-growth Red Cedar, which when dead and dried out, naturally splits into nearly straight planks. The abundance of these natural Cedar planks provided much of the material used to create the early ladders, bridges, and stunts that were required to negotiate the difficult terrain and fallen trees. Thus, most of the trails also contain man-made obstacles like skinny bridges, twisting "ladders" raised above the ground, and teeter-totters to ride on. This style of trail building and biking is sometimes referred to as "North Shore", describing trail systems that incorporate natural and man-made features of terrain. One of the most popular of these trails is CBC, which has recently been rebuilt and upgraded.

Trail riding on the North Shore has been the source of some controversy. Residents in neighbourhoods bordering on trail areas complain of bikers going across their lawns and other disturbances. On the North Shore's neighbouring mountains, the expansion of residential areas calls for the destruction of some trails on Eagle and Burke Mountain. An advocacy group called the North Shore Mountain Biking Association (NSMBA) seeks to help promote biking. They negotiate with property owners, organize volunteers to maintain the trails and hold races.

The Whistler-Blackcomb resort in Whistler, British Columbia is one of the best known places in the world for Mountain Biking. Both downhill and freeriding are popular there. The Fitzsimmons ski lift and Whistler Gondola are used on the bottom of Whistler Mountain. The Garbanzo lift is used in the middle. Biking opens around the end of April and is open through the summer. Numerous mountain biking events are held annually including Crankworx and the Joyride Huckfest.

Vancouver Island, though not as well-known for mountain biking as the North Shore, boasts a growing number of trails. They are located near the communities of Victoria, Sooke, Duncan, Nanaimo, Port Alberni, the Comox Valley, Campbell River, Cumberland, and Mount Work (also known as "the Dump").

The Delta Watershed park is a popular destination for local riders. It is one of the few place to mountain bike in Delta. There are other locations but they are mainly paved trials with no features - for instance Burns Bog trials (by Great Pacific Forum) and the Boundary Bay Dike.