Gwine to Run All Night, or De Camptown Races (popularly known as Camptown Races) is a minstrel song by Stephen Foster (1826–1864). It was probably composed in Cincinnati in 1849, according to Richard Jackson, and published by F. D. Benteen of Baltimore, Maryland, in February 1850. Benteen published another edition in 1852 with guitar accompaniment under the title, "The Celebrated Ethiopian Song/Camptown Races". Jackson explains that camptowns were communities of "Negro labourers and transients" living in shacks and tents thrown up along the edges of frontier towns, and speculates that Foster may have visited one in either Cincinnati or Pittsburgh, or heard the stevedores along the waterfronts singing or complaining about them.[1]

Jackson writes, "Foster quite specifically tailored the song for use on the minstrel stage. He composed it as a piece for solo voice with group interjections and refrain ... his dialect verses have all the wild exaggeration and rough charm of folk tale as well as some of his most vivid imagery ... Together with "Oh! Susanna", "Camptown Races" is one of the gems of the minstrel era."[1] 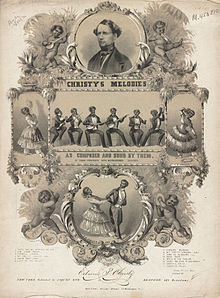 "Camptown Races" was introduced by the Christy Minstrels.

In The Americana Song Reader, William Emmett Studwell writes that the song was introduced by the Christy Minstrels, and noting that "[Foster's] nonsense lyrics are much of the charm of this bouncy and enduring bit of Americana ... [The song] was a big hit with minstrel troupes throughout the country." Foster's music was used for derivatives that include "Sacramento", "A Capital Ship" (1875) and a pro-Lincoln parody introduced during the 1860 presidential campaign.[2]

In America's Musical Life, Richard Crawford observes that the song resembles Dan Emmett's "Old Dan Tucker", and suggests Foster used Emmett's piece as a model. Both songs feature contrast between a high instrumental register with a low vocal one, comic exaggeration, hyperbole, verse and refrain, call and response, and sycopation. However, Foster's melody is "jaunty and tuneful" while Emmett's is "driven and aggressive". Crawford points out that the differences in the two songs represent not only two different musical styles, but a shift in minstrelsy from the rough spirit and "muscular, unlyrical music" of the 1840s to a more genteel spirit and lyricism with an expanding repertoire that included sad songs, sentimental and love songs, and parodies of opera. Crawford explains that by mid-century, the "noisy, impromptu entertainments" characteristic of Dan Emmett and the Virginia Minstrels were passé and the minstrel stage was evolving into a "restrained and balanced kind of spectacle". He writes, "In that setting, a comic song like "De Camptown Races", with a tune strong enough to hold performers to the prescribed notes, proved a means of channeling unruliness into a more controlled mode of expression."[3]