Jeanie with the Light Brown Hair

Jeanie with the Light Brown Hair 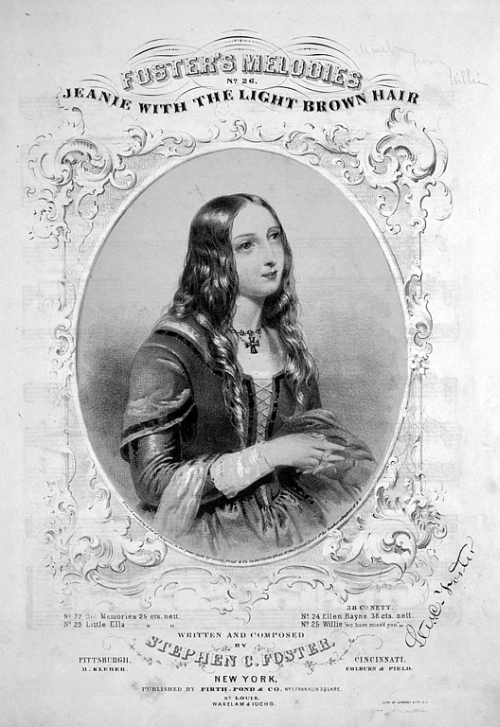 image_size=
caption=Cover, sheet music, 1854
writer=
composer=
lyricist=
published= 1854
written=
language=English
form=
original_artist=
recorded_by=
performed_by="Jeanie with the Light Brown Hair" is an by the American songwriter . It was written for his wife, Jane McDowall, who would end up leaving him as his life declined in later years.

The song was a notorious beneficiary of the strike of . During this period, most modern music could not be played by the major radio broadcasters due to a dispute over licensing fees. The broadcasters turned to public-domain songs during this period, and according to , "So often had BMI's Jeannie With the Light Brown Hair been played that she was widely reported to have turned grey." [cite web|title=No Letup|date=, |publisher=Time Magazine|url=http://www.time.com/time/magazine/article/0,9171,801239,00.html]

:"I long for Jeanie with the daydawn smile,":"Radiant in gladness, warm with winning guile;":"I hear her melodies, like joys gone by,":"Sighing round my heart o'er the fond hopes that die:":"Sighing like the night wind and sobbing like the rain,":"Wailing for the lost one that comes not again:":"I long for Jeanie, and my heart bows low,":"Never more to find her where the bright waters flow."

:"I sigh for Jeanie, but her light form strayed,":"Far from the fond hearts round her native glade;":"Her smiles have vanished and her sweet songs flown,":"Flitting like the dreams that have cheered us and gone.":"Now the nodding wild flowers may wither on the shore":"While her gentle fingers will cull them no more:":"Oh! I sigh for Jeanie with the light brown hair,":"Floating, like a vapor, on the soft summer air." [Foster, "Jeanie With The Light Brown Hair".]

*As it turned out, the first line of "Jeanie with the Light Brown Hair" inspired the name of the 1960s -related ""; incidentally, the title character had blond hair. Additionally, the song was also adapted into an series called "".

*A version of the song was performed by on her 1998 album People Are Strange.

*The song would also be referenced by singer/songwriter Tom Waits in his song, Sins of the Father, and the current NBC show "", when tells costar Jeannie to "Eat 'em up, Jeannie with the Light Brown Hair."

*The first line of the song is also repeated countless times in a memorable scene from John Cassavetes' film, "Faces".

*It is also heard in the comedy 'Musical Comedy Murders of 1940'.