Before airplanes landed on the beach, automobile races were held regularly. The beach provided a smooth, hard, and relatively clean surface to use for anything with wheels and speed. Pilots soon caught on and used the beach as a runway. Hangars were built later, and even aircraft service was provided on beach. This former airport is one of only two beach airports that were successful. The other, Old Orchard Beach, was located in Maine and was the starting point for at least five transatlantic flights during the 1920s and 1930s.[2] 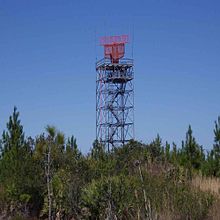 The first flight on the beach occurred in 1906 by Charles K. Hamilton, using Israel Ludlow's glider. The glider was pulled by an automobile and actually took place in Ormond. He went as high as 150 feet (46 m) on his first try, and 250 feet (76 m) on the second, before crashing into a flagpole and surviving with only a bruised knee.[2]

Numerous flights followed, including John A. D. McCurdy, the United States's 5th licensed pilot, in 1911, Phillips Page in 1912, and Ruth Law in 1913. Phillips Page has been credited for taking the first aerial photographs in Florida, while flying around the Hotel Clarendon in Daytona Beach. Many other pilots took to the skies above Daytona Beach before it was closed during the winter of 1929–30.[2] 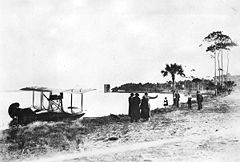 1916 photo of a seaplane at Daytona

All flights were moved to the new location at Bethune Point, right on the Halifax River. Eastern Air Transport was the first commercial service out of Daytona Beach. The airline was certified to fly mail to Tampa and Orlando. However, the first flight crashed just after takeoff, due to a mechanical failure. The pilot was uninjured, and the mail was collected and sent out on a different flight.[2]

Florida State Airways, Inc was an airline that formed in early 1930 in Daytona Beach. The airline provided service for passengers to other Florida cities and to the Bahamas, using Ryan aircraft. In January 1930, Vice President of Operations, Bill Lindley, piloted a flight to Palm Beach. While on the descent, he never pulled out of the dive and went into Lake Worth at full throttle. The combination of Lindley's death and the depression soon caused most aviation activity in Daytona Beach to stop.[2]

In late 1930, a 740-acre (299 ha) piece of land turned into the current airport, located just a few hundred feet from the main drag of International Speedway Blvd. The first name it was given was Sholtz Field, after the then Governor of Florida, who was from Daytona Beach. The airport began with two runways, both gravel. One runway was 1,800 feet (550 m) long, the other was 2,100 feet (640 m) long. Before too long the name was changed to Daytona Beach Municipal Airport.[2]

Eastern Air Lines began passenger service out of Daytona Beach, flying Kingbirds and Condors. But after only a few years, Eastern did not re-bid, after the airmail changes of 1934. In 1935, National Airlines won a bid on the cross-state route from Daytona Beach to St. Petersburg. In 1936, the airport was closed for repairs. National rerouted its flights to Jacksonville but Eastern became upset and called it an act of "buccaneers". National Airlines was nicknamed the "Buccaneer Route".[2]

For a short while in 1940, a zoo-keeper was hired to maintain the airport. When World War II broke out, the US Navy took over and used the airport for training, establishing it as Naval Air Station Daytona Beach. All runways were widened to 200 feet (61 m) and the east–west runway was extended to 5,500 feet (1,700 m). New buildings were constructed, some of which were later used by Embry-Riddle Aeronautical University after their move from Miami in 1965.[2][3]

At the end of the war, ownership was given back to the city of Daytona Beach in 1946. A permanent airline passenger terminal was completed in 1958, along with a control tower. During the 1960s, the east–west runway was extended to 7,500', facilitating operations for Eastern's Boeing 720 jets. This and the north–south runway were became 150' wide, the two diagonal runways were closed, and a 3100' x 75' flight training runway was built parallel to the main runway, on the south side of the field.

In 1969, Volusia County took over management and renamed the premises Daytona Beach Regional Airport. In the following decades Embry-Riddle considerably developed its campus on the northeast side of the field. By the mid-1980s, a midfield control tower had been completed, and the airport was served by airlines that included Eastern, Delta and Continental.

In 1992, a newer, larger two-level terminal was opened to the public. The previous terminal was converted to an international arrivals facility. These new buildings, along with extension of two runways to 10,500' and 6001', justified a name change to Daytona Beach International Airport. The only scheduled direct flights out of the country from the airport were provided by Vintage Props and Jets using small, turbo-prop aircraft.[2][3] On July 18, 2008, Vintage Props and Jets temporarily ceased operations and filed for Chapter 11 bankruptcy protection. International charters using wide-bodied jets of numerous airlines are periodically conducted.

According to an article in the Daytona Beach News Journal released on September 28, 2010, Stephen J. Cooke, the director of the airport, is in active talks with the recently merged Southwest/Airtran to begin service to Daytona. Airtran has served Daytona in the past competing with Delta on the Atlanta route and having routes to Baltimore and LaGuardia as well. Southwest has never served Daytona. A Southwest spokesman has said it is too soon to discuss future markets but talks are continuing. If Southwest were to serve Daytona it would likely be from numerous cities. This would increase competition and lower prices for an airport that has been monopolized by Delta and US Airways for years.[4]

Currently, Daytona Beach International Airport is served by two carriers, Delta Air Lines with service to Atlanta and US Airways with service to Charlotte. Delta provides mainline service year round using MD-88s, while mixing in CRJ-700s for the quiet summer season and DC-9-50s and A319s for the busy holiday season. Delta also adds daily 757s for the Spring Break season. US Airways uses regional jets ranging from CRJ-200s to CRJ-900s depending on the season. Both Airlines upgrade for the Daytona 500 weekend with Delta bringing in B757s and US Airways bringing B737s and A319s.