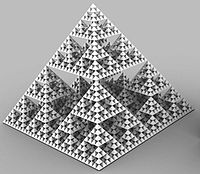 One may compute the energy levels for a potential well like this one.[note 1]

P-adic quantum mechanics is a relatively recent approach to understanding the nature of fundamental physics. It is the application of p-adic analysis to quantum mechanics. The p-adic numbers are a counterintuitive arithmetic system that was discovered by the German mathematician Kurt Hensel in about 1899. The closely related Adeles and Ideles were introduced in the 1930s by André Weil. Their study has now transformed into a major branch of mathematics. They were occasionally applied to the physical sciences, but it wasn't until a publication by the Russian mathematician Volovich in 1987 that the subject was taken seriously.[1] There are now hundreds of research articles on the subject,[2][3] along with international journals as well.

This article provides an introduction to the subject, followed by a review of the mathematical concepts involved. It then considers modern research on the subject, from Schrodinger-like equations to more exploratory ideas. Finally it lists some precise examples that have been considered.

Symmetric patterns can emerge from seemingly unrelated ones.

Many studies of nature deal with questions that occur at the Planck length, in which ordinary reality doesn't seem to exist. In some ways, the experimental apparatus and experimenter become indistinguishable, so that no experiments can be done. The unification of the immensity of cosmology with the Hilbert space formalism of nanotechnology presents a formidable challenge. Most researchers feel that the geometry and topology of the sub-Planck lengths need not have any relation whatever to ordinary geometry and topology.[4] Instead the latter are believed to emerge from the former, just as the color of flowers emerges from atoms. Currently many frameworks have been proposed, and p-adic analysis is a reasonable candidate, having several accomplishments in its favor. 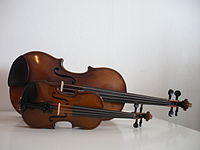 The p-adic integers correspond to the overtones of a violin string. The integers mod a prime can be viewed as a miniature version of the p-adic numbers.

Another motivation for applying p-adic analysis to science is that the divergences that plague quantum field theory remain problematic as well. It is felt that by exploring different approaches, such inelegant techniques as renormalization might become unnecessary.[5] Another consideration is that since no primes have any special status in p-adic analysis, it might be more natural and instructive to work with adeles.

There are also aesthetic considerations, including those stemming from music. For instance, if one plays the overtones of a violin string, one notices that there are overtones at half the length, a quarter of the length, an eighth of the length, and so on. Those would correspond to the 2-adic integers. The same is true of the 3-adic integers, and so on for all primes. There are no other standing waves because non-integer values will cancel out. Thinking of nature as the overtones of n-dimensional strings is appealing to many people.[note 2]

There are two main approaches to the subject.[6][7] The first considers particles in a p-adic potential well, and the goal is to find solutions with smoothly varying complex-valued wavefunctions. Here the solutions to have a certain amount of familiarity from ordinary life. The second considers particles in p-adic potential wells, and the goal is to find p-adic valued wavefunctions. In this case, the physical interpretation is more difficult. Yet the math often exhibits striking characteristics, therefore people continue to explore it. The situation was summed up in 2005 by one scientist as follows: "I simply cannot think of all this as a sequence of amusing accidents and dismiss it as a 'toy model'. I think more work on this is both needed and worthwhile."[8]

Review of p-adic and adelic analysis

The ordinary real numbers are familiar to everyone. Still reasonably familiar, but less so, are the integers mod n. They are sometimes studied in courses on number theory, but are often regarded as a curiousity. It turns out that they have major significance. The reason they work is that they are a subset of the p-adic integers. Ostrowski's theorem states that there are essentially only two completions of the rational numbers, depending on the metric considered: these are the real numbers and the p-adic numbers. One completes the rationals by adding the limit of all Cauchy sequences to the set. The completions are different because of the two different ways of measuring distance.[note 3] The former obey a triangle inequality of the form |x+y| ≤ |x| + |y|, but the latter obey the stronger form of |x+y| ≤ max{|x|, |y|}; this is sometimes called an ultrametric space. In summary, there exist two different types of algebraic systems.

There is a question of how to unify these two foundational ideas, as they behave very differently in both space and time. This is solved by considering the patterns that occur, when one welds them together into a single mathematical object. This is the ring of adeles. It is of the form

is a real number, and the xp are in

stands for the "prime at infinity". So an adele ring is essentially a direct product. The idele group is defined as the essentially invertible elements:

Many familiar structures carry over to the adeles. For example, trigonometric functions, ex and log (x) have been constructed, as well as special functions like the Riemann zeta function, along with integral transforms like the Mellin and Fourier transform.[9] This ring has many interesting properties. For instance, it obeys the Hasse local-global principle: a rational number is the solution of a polynomial equation if and only is it has a solution in R and Qp for all primes p.[6] In addition, the real and p-adic norms are related to each other by the remarkable adelic product formula:[10]

The p-adic numbers also furnish unusual proofs. For instance, one might consider the Pythagoreans, who were famous for insisting that all numbers were rational. Had they been aware of p-adic numbers, they would have found out quickly that this is not so. For consider √p, where p is a prime number. It is well known that there exists a minimal extension of the p-adic numbers of the form a+b√p. Therefore √p is not in Qp. But Qp contains all possible rationals. Therefore there are an infinity of irrationals. Writing this in the most condensed notation possible, one has the following rigorous proof: 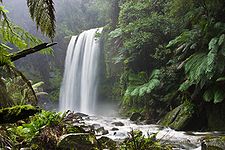 P-adic numbers may provide deeper insights about why water falls the way it does.

Many upper-division science students are familiar with the particle in a box, or the particle in a ring. But there are also other types of potential wells. For instance, one may also consider the fractal potential wells. The solution of Schrodinger-like equations for potentials of this kind has been of interest for some time. Not only is it challenging to solve for puzzles like this, but it can be used for approximating complicated potentials as well, such as those that arise in the design of microchips. For example, one group of authors study the Schrödinger equation as it applies to a self-similar potential.[11] Another group studied the potentials constructed from the Riemann zeros and prime number sequences. They estimate the fractal dimension to be D = 1.5 for the Riemann zeros, and D = 1.8 for the prime numbers.[12]

As early as 1965, Feynman had stated that path integrals have fractal-like properties.[15] And, as there does not exist a suitable p-adic Schrodinger equation,[16][17] path integrals are employed instead. One author states that "Feynman's adelic path integral is a fundamental object in mathematical physics of quantum phenomena".[18] In order to do computations, certain details have to be made precise. For instance, one may define a meaningful derivative operator. In addition, both A and A* have a translation-invariant Haar measure:[19]

is the fractional part of

in the ordinary p-adic expression for x. This can be thought of as a strong generalization of the homomorphism

Now the adelic path integral, with input parameters in A and generating complex-valued wavefunctions is[20]

and similar to the case for real parameters, the eigenvalue problem is[20]

are adelic eigenfunctions, and

is the adelic energy. Here the notation has been simplified by using the subscript

, which stands for all primes including the prime at infinity. One notices the additive character

which allows these to be complex-valued integrals. The path integral can be generalized to p-adic time as well.[21]

The research has not been limited to the inverse limit of the integers mod a prime number, because all finite fields have similar constructions. In fact, every finite field is the quotient of an ideal of that inverse limit, and therefore the system is actually a tower of ideals. The study of quantum mechanics in finite fields has been considered by a number of authors.[24][25] One motivation is that if spacetime is discrete, then perhaps continuous spacetime can be viewed as an approximation to finite fields. The theory of supersymmetry has been studied in finite fields as well.[26]

is a p-adic integer, and 0 otherwise. One notices the close similarity to the ordinary complex-valued ground state. Applying the adelic version of the Mellin transform, we have

is the gamma function, and

is the Riemann zeta function. Now there is a famous functional equation called the Tate formula, which says that

"It is remarkable that such simple physical system as harmonic oscillator is related to so significant mathematical object as the Reimann zeta function".[6] In addition, the statistical mechanics partition function for the free Riemann gas[note 4] is given by the Riemann zeta function:

This allows the four-point amplitudes, and all higher amplitudes to be computed at the tree level exactly, as the inverse of the much simpler p-adic amplitudes. This discovery has generated a quite a bit of activity in string theory.[28] The situation is not as easy for the closed bosonic string, but studies are still being pursued.

The math associated with this study is elegantly formulated in the language of gauge theory. In particular, one studies the wavefunctions in a tangent space known as a principal bundle. This helps to formulate a self-consistent theory. In this case, there is an idele-group bundle. It can be matrix-valued, in which case it may be noncommutative as well.

This section presents concrete examples of fractal or adelic systems which have been studied.

The following one dimensional systems have been studied by means of the path integral formulation: the free particle,[2] the particle in a constant field,[33] the harmonic oscillator,[9] and others as well.

Particle on a Sierpinski gasket

Percolation theory is used by many to study the behaviour of integrated circuits and other designs. This is because the materials are so small that they qualify for disordered materials theory. Many disordered materials "exhibit geometrical inhomogeneties over a broad range of length scales".[34] More importantly, near the percolation threshold, the geometry is fractal. This is well known from the theory of phase transitions. In 2011, one group studied potential theory on the Sierpinski gasket.[34] They develop a mathematical formalism, and show how it can be used to develop a potential theory on this space, even though it is technically not a manifold. Another group studied Josephson junction arrays of periodically repeated Sierpinski gaskets.[35]

Particle on a Cantor set

One group numerically solve a rescaled version of the Schrodinger equation for a particle in a Cantor-like potential.[36]