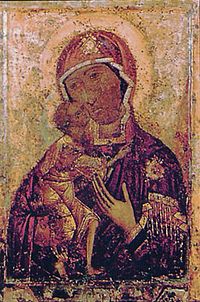 Fyodorovskaya Theotokos (Russian: Федоровская Богоматерь), also known as Our Lady of St. Theodore and the Black Virgin Mary of Russia is the patron icon of the Romanov family and one of the most venerated icons in the Upper Volga region. Her feast days are March 27 and August 29.

Since the Fyodorovskaya follows the same Byzantine Eleusa (Tender Mercy) type as the Theotokos of Vladimir, pious legends declared it a copy of that famous image, allegedly executed by Saint Luke. In Greek, Theotokos means "God-bearer". It is believed that, before the Mongol invasion of Rus, the icon was kept in a monastery near the town of Gorodets-on-the-Volga. After the Mongols sacked and burnt the town, the icon disappeared and was given up for lost.

Several months later, on 16 August 1239, Prince Vasily of Kostroma wandered while hunting in a forest. While trying to figure his way out of the thicket, he saw an icon concealed among fir branches. When he reached out to touch it, the icon mysteriously rose up in the air. The frightened and awestruck prince informed the citizens of Kostroma about the miracle he had witnessed and returned with a crowd of people to the forest. They fell prostrate before the icon and prayed to the Theotokos. Then the icon was transported to the city and placed in the Assumption Cathedral. A conflagration destroyed the cathedral and most of its icons soon thereafter, but the Fyodorovskaya was found intact on the third day after the fire.[1]

The people of Gorodets, situated considerably to the east of Kostroma, learned about the miracle of its survival of the fire. They recognized the newly found icon as theirs and demanded it back. After a long litigation, the people of Kostroma had a copy of the icon painted and sent back to Gorodets.

Church legends differ as to why the icon was named after Saint Theodore Stratelates (Russian: Fyodor Stratilat, not to be confused with Theodore Tyro). One explanation is that, during Vasily's absence in the forest, several people claimed to have seen the apparition of St. Theodore walking the streets of Kostroma with an icon of the Theotokos in his hands. 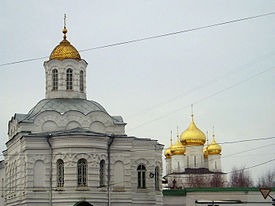 16th-century Epiphany Monastery in Kostroma where the icon is on exhibit today.

Since the icon was overpainted several times during its history, by the time of the Russian Revolution of 1917, the image had almost disappeared from the icon. Art historians disagree about when and where the icon was created. Some propose an early 11th-century date; others date it as late as the turn of the 14th century.[2] A clue to the icon's provenance may be supplied by the image on the reverse side of the Fyodorovskaya. This image represents Saint Paraskevia, a saint whose veneration started in the Novgorod Republic at the turn of the 13th century.

Scholars believe that the image of St. Paraskevia is contemporaneous with the image of the Theotokos on the other side. This dating seems to confirm the Novgorodian origin of the icon, as it was only in the 15th century that the veneration of St. Paraskevia spread to other parts of the country. The saint's princely dress may indicate that the icon was intended as a wedding gift to a princess whose patron saint was St. Paraskevia. Only one such princess is known in the Rurikid family: Vasily Tatischev mentions that St. Paraskevia was a patron saint of Alexandra of Polotsk, the only wife of St. Alexander Nevsky of Novgorod.

Indeed, the feast day of St. Alexandra coincides with that of St. Paraskevia (20 March). In the Rurikid family, it was customary for a groom to present his bride an icon representing her patron saint.[3] On these grounds, Fyodor B. Uspensky concluded that the Fyodorovskaya was presented by Alexander Nevsky to his wife Alexandra-Paraskevia on the occasion of their wedding in 1239.[4]

If this theory is correct, the revered image of the Theotokos could have been commissioned by Alexander's father, Yaroslav II of Russia.[5] His Christian name was Fyodor and his patron saint was St. Theodore Stratelates. Herein may lie the explanation of the label traditionally applied to this image. There may have been several reasons why the icon could have surfaced in Gorodets or Kostroma. It is known that Alexander Nevsky had a palace in Gorodets and that he died in this town. On the other hand, Vasily of Kostroma was Alexander's brother and could have obtained the icon from him or his wife. 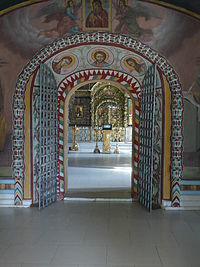 Up to the 17th century, the icon was little known outside Gorodets and Kostroma. Its fame spread all over Russia after 1613, when the adolescent Mikhail Romanov had been elected a new Russian tsar. Romanov lived in Kostroma with his mother Xenia, who had been forced to "take the veil" (join a convent and withdraw from public life) by the regent Boris Godunov. At first the nun advised her only son to stay in Kostroma and decline the offer of the Monomakh's Cap, or the position of tsar. She cited the ignominious end of three previous tsars, who had been either murdered or disgraced. At last Xenia blessed her son by giving him a copy of the Fyodorovskaya. She asked the icon to protect Mikhail and his royal descendants. The young tsar took a copy of the icon with him to Moscow, where it came to be regarded as the holy protectress of the Romanov dynasty.

Apart from Kostroma, the Fyodorovskaya has been venerated in nearby Yaroslavl, where some of the oldest copies of the icon may be found. In 1681, the icon appeared in a dream to Ivan Pleshkov, who had been paralysed for twelve years. He was commanded to go to Kostroma, procure a copy of the icon, bring it back to Yaroslavl and to build a church for its veneration. As soon as he was cured of palsy, Pleshkov commissioned Gury Nikitin, the most famous wall-painter of 17th-century Russia, who hailed from Kostroma, to paint a copy of the miraculous icon. The Fyodorovskaya Church was built to house the icon, with funds provided by ordinary people. A treatise details its construction and the miracles attributed to the icon in Yaroslavl.[6] The church was consecrated on 24 July 1687. As the Communists destroyed the Assumption Cathedral of Yaroslavl during the Russian Revolution, the Fyodorovskaya Church has served as the cathedral for the city and the archdiocese of Rostov, the oldest in Russia. 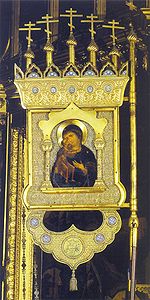 Another copy of the icon has been venerated in Gorodets, especially after the Fyodorovsky Monastery was reestablished in the early 18th century. A new copy of the icon was brought to it from Kostroma. This image was fitted into a golden riza inlaid with precious stones, so as to rival the original by its sumptuous decoration. During the annual Makariev Fair, the icon was brought for veneration to Nizhny Novgorod.[7]

When the tercentenary of the Romanov dynasty was celebrated in 1913, Nicholas II of Russia commissioned a copy of the Gorodets icon, which he placed at the Royal Cathedral of Our Lady of St. Theodore, constructed to a design by Vladimir Pokrovsky in the purpose-built Fyodorovsky Town of Tsarskoe Selo. It is said that Nicholas II could not have had a copy from the original image because the icon in Kostroma had blackened so badly that the image was hardly visible. This was interpreted as a bad sign for the Romanov dynasty. Indeed, the Romanovs were dethroned four years later during the Russian Revolution. The Assumption Cathedral in Kostroma was blown up by the Bolsheviks.

Unlike all the other great miraculous icons of Russia, the Fyodorovskaya was not transferred to a museum, because the image was impossible to discern. The Black Virgin was given to the sect of obnovlentsy, which had it restored in Moscow in 1928. After the sect was dissolved in 1944, the icon reverted to the Russian Orthodox Church. It deposited the icon in the famous Resurrection Church on the Lowlands in Kostroma. In 1991 the icon was moved from there to the revived Epiphany Cathedral in the same city. Recently encased in a new chasuble, the icon is still venerated at the convent associated with the cathedral.