The Battle of the Lys (also known as the Lys Offensive, the Fourth Battle of Ypres, the Third Battle of Flanders (French: 3ème Bataille des Flandres) and as the Batalha de La Lys in Portugal) was part of the 1918 German offensive in Flanders during World War I (also known as the Spring Offensive). It was originally planned by General Ludendorff as Operation George but reduced to become Operation Georgette, with the objective of capturing Ypres and forcing the British forces back to the Channel ports (and thereby out of the war). The battle began on 7 April 1918, and lasted until 29 April. In planning, execution and effects, Georgette was similar to (although smaller than) Operation Michael, earlier in the Spring Offensive. 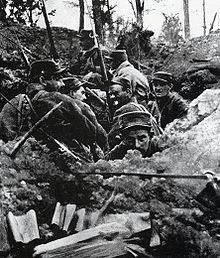 Portuguese forces in trenches at the Lys, 1918.

The German attack zone was in Flanders, from about 10 km east of Ypres in Belgium to 10 km east of Béthune in France, about 40 km south. The front line ran from NNE to SSW. The Lys River, running from southwest to northeast, crossed the front near Armentières in the middle of this zone.

The German attacking forces were the Sixth Army in the south (under von Quast), and the Fourth Army in the north (under Sixt von Armin). Both armies included substantial numbers of the new Stosstruppen, trained to lead attacks in the new Hutier tactics.

The First Army in particular was a relatively weak force; it included several worn-out formations that had been posted to a "quiet sector". This included two Portuguese divisions, which were undermanned, lacked almost half of their officers, had very low morale and were set to be replaced the day of the German attack.

The German plan was to smash through First Army, push Second Army aside to the north, and drive west to the English Channel, cutting off British forces in France from their supply line which ran through the Channel ports of Calais, Dunkirk and Boulogne.

The battle opened on the evening of 7 April, with a heavy German artillery barrage against the southern part of the Allied line (between Armentières and Festubert). The barrage continued until dawn on 9 April. The Sixth Army then attacked with eight divisions. The centre of the attack struck the Portuguese divisions, which crumbled. The British 55th Division (south of the Portuguese) pulled back its northern brigade, and despite numerous further attacks held its ground for the rest of the battle. The British 40th Division (to the north) was outflanked and attacked from the rear and fell back to the north.

Horne committed his emergency reserves (1st King Edward's Horse, 11th Cyclist Battalion) to stem the German breakthrough, but they too were defeated.

The Germans broke through 15 km of front and advanced up to 8 km, the most advanced probe reaching Estaires on the Lys. There they were finally halted by British reserve divisions.

This action was one of the greatest defeats ever suffered by Portuguese forces. The 2nd Portuguese Division, with approximately 20,000 men and commanded by General Gomes da Costa (later President of Portugal), lost about 300 officers and 7,000 men killed, wounded or taken prisoner. Despite the defeat, acts of bravery were shown by the Portuguese soldiers, the most famous episode was that of Aníbal Milhais (nickname "Soldier Millions") who, armed only with a Lewis gun, defeated almost single-handedly, two German assaults by laying down intense fire, covering the retreat of Portuguese and Scots alike, despite coming under heavy attack himself.

On 10 April, Sixth Army tried to push west from Estaires, but was contained for a day; but pushing north against the flank of Second Army, took Armentières.

Also on 10 April, German Fourth Army attacked north of Armentières with four divisions, hitting the British 19th Division. Second Army had sent its reserves south to aid First Army, and the Germans broke through, advancing up to 3 km on a 6 km front, and capturing Messines. The 25th Division to the south, flanked on both sides, withdrew about 4 km.[1]

By 11 April, the British situation was desperate; it was on this day that Haig issued his famous "Backs to the wall" order.

On 12 April, Sixth Army renewed its attack in the south, towards the important supply centre of Hazebrouck, another 10 km to the west. The Germans advanced some 2 to 4 km, and captured Merville[disambiguation needed

]. But on 13 April they were stopped by the Australian 1st Division, which had been transferred to the area. The British 5th and 33rd Divisions were also moved there.

Between 13 and 15 April, the Germans drove forward in the centre, taking Bailleul, 12 km west of Armentières, despite increasing British resistance. Plumer assessed the heavy losses of Second Army and the defeat of his southern flank and ordered his northern flank to withdraw from Passchendaele to Ypres and the Yser Canal; the Belgian Army to the north conformed.[1]

The Kemmelberg is a height commanding the area between Armentières and Ypres. On 17–19 April, Fourth Army attacked there, but were repulsed by the British. [2]

On 18 April, Sixth Army attacked south from the breakthrough area toward Béthune, but was repulsed.

Second Battle of the Kemmelberg

French Marshal Foch had recently assumed supreme command of the Allied forces, and on 14 April agreed to send French reserves to the Lys sector. A French division relieved the British defenders of the Kemmelberg.

On 25 and 26 April, Fourth Army made a sudden attack on the Kemmelberg with three divisions, and captured it. [3]

However, while this success gained some ground, it made no progress toward a new break in the Allied line.

On 29 April, a final German attack captured the Scherpenberg, a hill to the northwest of the Kemmelberg.

More French reinforcements arrived in the latter part of April, the Germans had suffered heavy casualties, especially among the Stosstruppen and attacks toward Hazebrouck failed. It was clear that Georgette could not achieve its objectives; on 29 April the German High Command called off the offensive. Both sides each lost about 120,000 men in the battle.