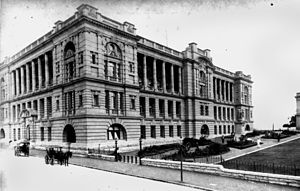 The former Lands Administration Building (which was known as the Executive Building prior to 1971) is a four-storeyed ex-government office building occupying a site bounded by George Street, Stephens Lane, William Street and Queens Gardens in Brisbane, Australia. The building currently forms part of the Conrad Treasury Casino and houses a 5 star hotel.

The form and scale of the building complement the former Treasury Building and the former State Library located nearby.

The building was designed by the Queensland Government’s chief architect Thomas Pye in the Edwardian Baroque style. Foundation preparation work commenced in 1899 and the main construction phase commenced in 1901. The principal elevation of the building is towards Queens Gardens and the elevations to George and William Streets have banded rustication on the lower two storeys. This two-storeyed base supports a colonnade of giant ionic order columns.

The building was symbolic of state pride and achievement, and was seen as a showcase for Queensland materials. Granite used as the base course and plinth was obtained from Enoggera and Mount Crosby. Brown freestone from Helidon was used to face the outer walls, and freestone from Yangan near Warwick was used on the colonnade walls. The decorative carving to the facades, completed during 1903-04, included in the north-western elevation an allegorical group representing Queensland mining and agriculture, carved by New South Wales sculptor WP MacIntosh to a design by Thomas Pye. The mantelpieces were constructed of a variety of Queensland timbers (maple, cedar, black bean and silky oak) representing the state's timber resources. Allegorical stained glass highlighted the rural nature of the Queensland economy.

The Queensland National Art Gallery occupied a purpose-designed room the length of the third floor above George Street from 1905 until 1930.

Both the Queensland State Executive Council and Cabinet met in the building from 1905 until 1971, when new offices were constructed at 100 George Street. Since then the former Executive Building has been known as the Lands Administration Building.

The building features stained glass in the entrance vestibules and elsewhere in the interior which complements the use of sculpture externally. Of particular importance is a marble tablet set into the wall of the George Street entrance inscribed with the message sent by King George V to the people of Australia on 25 April 1916, establishing the Anzac Day tradition.