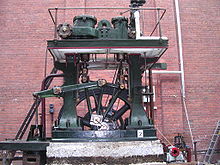 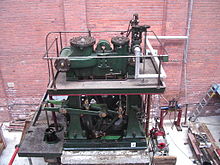 View from above the Park Street Mill engine. Larger (low pressure) cylinder is on the left.

Musgrave's non-dead-centre engine was a stationary steam engine of unusual design, intended to solve the problem of stopping on dead centre.

The "dead centre" of a piston engine with cranks is when the piston is at the exact top or bottom of the stroke and so the piston cannot exert any torque on the crankshaft. If a large stationary engine stops on dead centre, it will be unable to re-start from that position.

Several solutions to this have been applied. One of the simplest is to try not to stop in this position, the crudest to apply a strong arm with a crowbar to turn the engine over a little. Small steam barring engines were also used to move the engine away from dead centre before starting. If the engine has multiple cylinders, most geometries for these are arranged so that all cylinders are never at dead centre together and so one may always be used for starting.

Dead centre is rarely a problem for internal combustion engines, as these usually require cranking over to provide cylinder compression and so do not attempt to self-start from stationary. Some large stationary diesel engines, where these used a compressed air starting mechanism, have suffered from the problem of dead centres and so used a small manual barring gear.

A parallel twin with this many cylinders would be self-starting from dead centre anyway (assuming the usual crankshaft with cranks at 90°).

The geometry in operation is more like that of a vee-twin engine. The two cylinders work together, but with one leading the other by approx. 30°. The difference in this case is that the cylinders are no longer directly in line with the crankshaft and so use the connecting rod as a form of bellcrank. If one cylinder is at dead centre, the other will be away from it by the amount of this angle.

A vee-twin would offer all the advantages of the Musgrave engine, but would only need two simple connecting rods. The cylinders would no longer be parallel, but that is far from impractical to manufacture, as demonstrated by the even earlier diagonal engine.

The two cylinders are connected to the single crankpin through a complex connecting rod of four separate links, and a rigid mounting point to the frame and cylinders.[1]

The main connecting rod is a large triangular frame, driven by both cylinders and driving the crankpin. Owing to the phase difference between the cylinders, this frame tilts back and forth as the engine rotates and so the cylinder crossheads drive it through two short connecting rods, allowing for some movement side-to-side.[2] A large rocking lever attached to the engine's frame holds the connecting rod roughly central. On the Bolton engine, this lever is extended past the frame and used to drive the condenser air pump.

Similarities to the Ross yoke

A similar mechanism appears to have been invented independently, much later on. This is the Ross yoke, invented by Andy Ross for use with Stirling engines.[3] A pair of parallel cylinders, one for the piston (driving), one containing the (driven) displacer, are connecting so that they drive back and forth with a suitable phase shift between them.

The design of the engine originated with W.Y. Fleming and P.Ferguson, marine engineers of Glasgow, in 1887.[1] It was intended for use as a marine engine, but it is unclear if they were ever used as such.

John Musgrave & Sons of the Globe Ironworks, Bolton was a mill engine builder, supplying the local cotton mills. He licensed the design in 1892, then patented further improvements to it in 1893.[4][1]

Musgrave built up to 50 of these engines, the largest offering 1,500 ihp with quadruple expansion working. Ten of these quadruple expansion, four cylinder engines were built, the remainder mostly being two-cylinder compound engines, as the Park Street Mill engine.[1] The larger engines used Corliss valves.[5]

A poster in the Science Museum advertises engines to "Fleming, Ferguson, & Dixon's patent". These are twin-cylinder compound engines with a single semi-rotary valve per cylinder (as for Park Street Mill) and are offered in a range from 8 to 250 ihp and with speeds from 160 to 250 rpm.[4][7][4] Their working pressure is not specified, but the same poster also offers Lancashire boilers of up to 200 psi.

All of these engines are of robust construction, with large cast iron frames that have the cylinders cast integrally with them. The Park Street Mill engine is made from two large castings bolted together along a central plane and with the steam passages cored directly into the castings.

The crossheads are of the slipper pattern. This design has asymmetric bearing surfaces and so supports the forces better when the engine rotating in one direction than the other. They are commonly found on stationary engines that do not need to be reversed. However in the Musgrave design, the two slideways face each other and so one of them will always be working "in reverse" to usual practice.

Only one Musgrave non-dead-centre engine is known to survive,[9] now preserved at the Bolton Steam Museum as part of the Northern Mill Engine Society collection.[10][11] On steam days these engines (or at least some) may be seen in action.[12] The collection also includes two other engines built by Musgrave's (not non-dead-centre): much smaller barring engines.

Photo galleries of this engine may be seen on the NMES web site[13] or a video of it in action.[2]. There are also images on Flickr.[14]

A small model of a twin-cylinder compound engine is on display.[4]

In 2009 the Model Engineer serialized the construction of a Musgrave engine, from castings supplied by the German firm of Lothar Matrian.[4]