The game's story centers on the wannabe pirate Guybrush Threepwood. After defeating ghost pirate LeChuck in The Secret of Monkey Island, little is known of what happened between Guybrush Threepwood and Elaine Marley. The sequel involves Guybrush's attempts to both find the mysterious treasure, Big Whoop, and win back Elaine's love.

The development team for the game was largely the same as for the first game in the series. The project was led by Ron Gilbert, and he was once more joined by Tim Schafer and Dave Grossman.

LeChuck's Revenge plays like most SCUMM-based point-and-click adventure games. Actions and dialogues are depicted on an Animation Window which covers the top of the screen; verbal commands are listed in the lower left-hand corner of the screen, while Inventory items are shown as icons on the lower right-hand corner. A Sentence Line is located below the Animation Window and serves in describing the actions of the player.[2]

The game was one of the few adventure games that offered the player a choice in levels of puzzle difficulty. In some versions, before starting the game, the player is prompted to choose between regular version and "Monkey 2 Lite", a relatively stripped-down experience that bypasses many puzzles entirely. On the back of the game's packaging it is (jokingly) stated that this mode is intended for video game reviewers.

LeChuck's Revenge is set in the fictional Tri-Island Area of the Caribbean, several months after The Secret of Monkey Island.[3] The game opens in medias res as Guybrush Threepwood hangs on a rope above a hole, narrating to Elaine Marley on a separate rope the events that led to this situation.[3] The flashback sequence starts on Scabb Island and constitutes most of the playable game's setting. During it, Guybrush also visits Phatt Island, Booty Island, and Dinky Island, voyaging on two different pirate ships.

The game was also the first and only in the original series under the direction of LucasArts that never actually took place on Monkey Island. However, it is revealed in the following game, The Curse of Monkey Island, that the Carnival of the Damned seen in the LeChuck's Revenge's conclusion was actually part of Monkey Island.

Some of the notable characters include:

A screenshot, demonstrative of the detail-intensive graphical style of the game.

Guybrush's story begins with him talking to two pirates and telling them about the time he defeated LeChuck.[2] He further tells them that he is looking for the treasure of "Big Whoop", and for a ship to take him there.[4] The pirates tell Guybrush that Largo LaGrande, LeChuck's ex-first mate, has placed an embargo on the island, and is not allowing any ships to enter or leave. Guybrush, with the voodoo-doll that Voodoo Lady gives him, defeats Largo. However, in trying to prove that he was the one who killed LeChuck, Guybrush makes the mistake of showing Largo that he has LeChuck's beard. Largo then steals the beard and uses it to resurrect his old patron, this time as a zombie. The Voodoo Lady reveals to Guybrush that Big Whoop, the mythical treasure for which he is searching, is also the key to another dimension which will allow him to escape from LeChuck forever. In addition, she gives him a library book about Big Whoop which reveals that a map, made by the original discoverers of the treasure, still exists in four fragments.

After a lengthy quest involving library research, rigged gambling, theft, drinking contests, necromancy, monkeys and spitting, Guybrush is able to recover all four fragments of the map. He gives the map to Wally the cartographer so that it can be deciphered, but both Wally and the map are captured by LeChuck. Guybrush stows away in a crate of voodoo supplies which is delivered to LeChuck's fortress, and through yet more spitting to escape being turned into a chair, and an accident involving a match and a large quantity of explosives, he and Wally are able to escape, although without recovering the map. Literally landing on Dinky Island, Guybrush encounters Herman Toothrot, who claims to be teaching zen philosophy on the beach. Herman is typically unhelpful, but his parrot remembers the conversation between the sailors who originally discovered Big Whoop and guides Guybrush to the treasure's burial site in exchange for crackers. Guybrush excavates the site using dynamite, and lowers himself into the hole on a rope. Elaine Marley, in her home on Booty Island, hears the explosion and correctly deduces that someone is attempting to dig up Big Whoop.

At this point, we return to the scene from the overture, of Elaine and Guybrush talking. Elaine agrees to help Guybrush if it will shut him up, remarking "That was the longest story I've ever heard!" Unfortunately for Guybrush, at this point his rope snaps and he falls into a series of artificial tunnels. LeChuck confronts Guybrush, claiming to be the mighty pirate's brother, and stalks him through the tunnels, tormenting him with a voodoo doll. Running from LeChuck, Guybrush makes a number of surprising discoveries, including the skeletal remains of his parents in a medical examination room (underneath a large sign reading LOST PARENTS, with an arrow), an elevator to Mêlée Island, and the infrastructure for an amusement park.

By taking advantage of his surroundings, Guybrush is able to construct a voodoo doll of LeChuck, and maims the zombie pirate. LeChuck begs Guybrush to take his mask off; Guybrush acquiesces, revealing the face of his "creepy brother, Chuckie". The reunion of the two "brothers" is interrupted by a man in brown coveralls, not unlike the delivery crew in Acts II and III, telling them that kids are not allowed "down here." The two brothers, now both appearing as children, exit the tunnels together and meet their parents aboveground in the "Big Whoop" amusement park, with Guybrush either agreeing with his "parents", stating his identity, or simply asking, "This is weird. What's going on here?". As the family leaves to ride the Madly Rotating Buccaneer, Chuckie turns towards the screen and grins, voodoo magic playing over his eyes. The last in-game screen shows Elaine standing outside Big Whoop excavation site, wondering "what's keeping Guybrush? I hope LeChuck hasn't cast some horrible SPELL over him or anything."

Guybrush tries to lure the dog "Walt" with a bone.

The project leader and designer was Ron Gilbert. The development team for the game was largely the same as for The Secret of Monkey Island, and Gilbert was once more joined by Tim Schafer and Dave Grossman. Gilbert parted ways with LucasArts after Monkey Island 2, while Grossman went on to co-design Day of the Tentacle with Schafer. Schafer's future projects for LucasArts included Full Throttle and Grim Fandango.

According to Gilbert, the Monkey Island series was partially inspired by the Pirates of the Caribbean ride. Monkey Island 2 features a number of tributes to it, particularly a scene with a guard dog in a prison being lured by a bone and Disneyland style underground tunnels and "E tickets" in the closing scenes. An even greater influence, however, was the 1988 book On Stranger Tides, by Tim Powers.[5]

LeChuck's Revenge was the first title to use Michael Land's and Peter McConnell's iMUSE audio engine that enabled the compositions in the game to change interactively depending on the current environment or situation.[6] The DOS version uses sequenced music played back by either an internal speaker, the FM synthesis of an AdLib or Sound Blaster sound card, or the sample-based synthesis of a Roland MT-32 sound module.[7]

After the success of The Secret of Monkey Island, Monkey Island 2: LeChuck's Revenge was highly anticipated. Amiga Power called it the most eagerly awaited game of 1992.[8] When the game was released, it received consistently high reviews for all versions, 95% from Amiga Computing for the Amiga version,[9] 96% from Computer and Video Games for the IBM PC version.[10] When Kixx XL rereleased Monkey Island 2 as a budget game, the reviews remained high getting 91% from CU Amiga.[11] The game is still considered very high quality with contemporary reviewers scoring the game highly.[12] Monkey Island 2 is often considered the greatest in the point-and-click genre,[13] and it still stands up well against modern adventure game titles.[14] The game currently holds a rating of 91.6% on the review aggregator site GameRankings.[15]

Monkey Island 2: LeChuck's Revenge was rated highly for several reasons. The game is considered user friendly as it has a "lite" mode.[9] This allowed beginners to play the game at an easier setting. The overall difficulty of both modes is also considered to be good.[9] The redesign in controls, such as the fewer verbs and graphical inventory were rated well as increasing the game's ease of use.[10]

Music in Monkey Island 2 was noted for its use of the iMUSE system. Reviewers noted that for the first time the sound is an integral part of the atmosphere.[10] Graphically, the game was considered an improvement over its predecessor, with reviewers very impressed.[9][10]

It is also noted by critics that the developers of Monkey Island 2 made using the Amiga version's 11 floppy disks relatively smooth,[9] but also noted that installing the game on a hard drive is recommended.[11]

The Special Edition was given a score of B+ by Gaming Bus; the site stated that there was more music and it was of higher quality, the graphics were improved, there was additional content, and the core game was still intact, though the hints were too helpful and there were some problems with controls.[16] 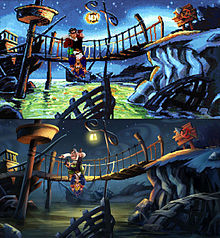 One of the changes for the Special Edition (bottom) from the original (top) is the updated high-definition graphics.

Following the release of a Special Edition of the first Monkey Island game in 2009, a Special Edition of Monkey Island 2 was released for the PlayStation 3, iPhone, iPod Touch, iPad, Windows, and Xbox 360 platforms in July 2010.[17] The Mac OS X version has not yet been released. The special edition includes updated graphics, a new musical score, new voice-overs, an art gallery, and an in-game hint system, however, the "lite" mode has been omitted. Players can opt to switch from the updated version into the older, pixelated graphics and music of the original game at any time, though an option allows players to retain the voice-overs of the remake.[18] Players can opt to use the original point-and-click control scheme, or can directly control the movements of Guybrush using a control pad or similar device.[19]

The remake was announced by LucasArts during their annual Game Developers Conference on March 10, 2010, with the previous creators of the adventures, Ron Gilbert, Tim Schafer and Dave Grossman, in attendance.[20] The trio of game designers have recorded a commentary track for the Special Edition that can be brought up in many locations, using silhouettes in the fashion of Mystery Science Theater 3000 overlayed on the graphics.[19][21][22]

Craig Derrick announced in an interview information on a new interface that was in the vein of The Curse of Monkey Island's and a return of the original voice cast, including Dominic Armato as Guybrush, Alexandra Boyd as Elaine, Earl Boen as LeChuck, and even Neil Ross as Wally. Phil LaMarr was also confirmed as Dread and Tom Kane as additional voices.