In knot theory, an area of mathematics, the link group of a link is an analog of the knot group of a knot. They were described by John Milnor in his Bachelor's thesis, (Milnor 1954). 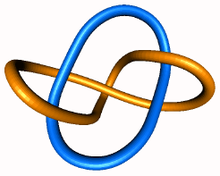 The link group of an n-component link is essentially the set of (n + 1)-component links extending this link, up to link homotopy. In other words, each component of the extended link is allowed to move through regular homotopy (homotopy through immersions), knotting or unknotting itself, but is not allowed to move through other component. This is a weaker condition than isotopy: for example, the Whitehead link has linking number 0, and thus is link homotopic to the unlink, but it is not isotopic to the unlink.

The link group of the Hopf link is

The link group of the Hopf link, the simplest non-trivial link – two circles, linked once – is the free abelian group on two generators,

Milnor defined invariants of a link (functions on the link group) in (Milnor 1954), using the character

which have thus come to be called "Milnor's μ-bar invariants", or simply the "Milnor invariants". For each k, there is an k-ary function

which defines invariants according to which k of the links one selects, in which order.

Milnor's invariants can be related to Massey products on the link complement (the complement of the link); this was suggested in (Stallings 1965), and made precise in (Turaev 1976) and (Porter 1980).

Another definition is the following: let's consider a link

. Then the Milnor 3-fold invariant equals the number of triple points in

The number of linearly independent Milnor invariants of length k+1 is mNk − Nk + 1, where Nk is the number of basic commutators of length k in the free Lie algebra, namely:

Link groups can be used to classify Brunnian links.