Meriones unguiculatus, the Mongolian Jird or Mongolian Gerbil is a rodent belonging to subfamily Gerbillinae. It is the most widely known species of the Gerbil subfamily, and is the usual gerbil species to be kept as a pet or experimental animal, when it is known as the Domesticated Gerbil. Like the Syrian Hamster (Golden Hamster), it was first brought to the United States in 1954 by Dr. Victor Schwentker for use in research. There were 44 pairs caught originally from Mongolia and brought to England. They were described as "squirrel colors... with long furry tails."

Meriones unguiculatus evolved on the semi-deserts and steppes of Mongolia. There, they developed long legs for jumping and running from predators, teeth to deal with hard seeds and plant matter, and water conservation techniques that allow them to survive in the arid climate, such as the ability to use dry food or stores of fat to generate metabolic water. Mongolian gerbils do not have many natural enemies due to the harsh climate. Most predators are birds-of-prey or snakes. Mongolian gerbils are diurnal, but return to their burrows for the coldest and hottest parts of the day.

The species Meriones unguiculatus came originally from Mongolia. Its habitat in Mongolia is mainly semi-deserts and steppes. Soil on the steppes is sandy and is covered with grasses, herbs, and shrubs. The steppes have cool, dry winters and hot summers. The temperature can get up to 50 degrees Celsius (122 degrees Fahrenheit), but the average temperature for most of the year is around 20 °C (68 °F).

In the wild these gerbils live in groups generally consisting of one parental pair and the last few litters. Only the dominant female and male produce pups. One group of gerbils generally ranges over 325 to 1550 square meters (0.08 to 0.38 acre).

The first known mention of gerbils came in 1866, by Father Armand David, who sent "yellow rats" to the Museum of Natural History (Musée d'Histoire Naturelle) in Paris, from northern China. They were named Meriones unguiculatus by the scientist Milne-Edwards in 1867. This Latin name means "clawed warrior" in English, partly from the Greek warrior Meriones in Homer's Iliad. 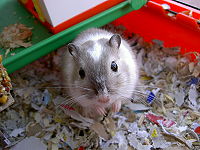 Gerbils are rather popular pets, due to their gentle-towards-humans temperament and hardy nature.

Because the Mongolian Gerbil is a very social creature, it is recommended that they be kept in pairs in captivity; one reason being that multiple gerbils tend to groom each other, or engage in other social activities. Therefore, gerbils generally lead poorer lives without a companion. When selecting a gerbil as a pet, it is important to select healthy-looking animal. Important criteria include having clear eyes, ears and nostrils, a shiny coat, and a robust body shape. Gerbils that display their inquisitive nature are a better choice than ones that prefer hanging back in a corner. Gerbils of any age can be tamed so don't be put off if they're a a few months old, remember that all those cute pups will soon grow to be adults and their baby phase will quickly pass!

When choosing your pets, it is obviously important to know their genders. Most males of a rehomeable age have prominent testicles but some may be hidden, checking that the genital gap between the urethra and anus are the same on all gerbils is the best way to ensure that you aren't unwittingly getting opposite sexes!

A same sex pairing of gerbils from the same litter is the best choice. Placing a male and a female in an enclosure will lead to an inevitable population boom, one that may tax the abilities of even experienced owners.

Females can be somewhat more competitive with each other than males which is why pairs are more commonly encouraged. Most of the time, two gerbils will live together contentedly and will rarely have a dispute serious enough to warrant separation of the pair.

Attempting to introduce gerbils from different litters may be successful when done at a very early age. After reaching maturity however, it can be extremely difficult to get a gerbil to accept a new companion, even if they are siblings. A quarantine must always be used before introducing different gerbils to one another.

While a pair of gerbils is recommended, larger numbers can be housed together. A same sex pair requires a minimum of 10 gallons space, a trio should have a 20 gallon long tank. Groups of 4 can be successful but it is best to avoid them since the larger the group the better chance of future problems.

There are a number of options available when selecting an enclosure for gerbils. The most commonly seen are wire cages, vivariums, or tube-based habitats such as Habitrail. The best choice is usually a glass or acrylic aquarium tank, which allows a thick layer of substrate to be placed. This allows gerbils to burrow as they would naturally. An aquarium tank is also sturdy and safe, and helps alleviate problems such as drafts. A plastic enclosure will be easily chewed out of, and provides little ventilation.

Once an enclosure has been selected, the next step is to choose a substrate. Choices include commercially available small animal substrate, peat, kiln dried pine or Aspen wood shavings. Pine that is not kiln dried and cedar shavings must be avoided in the USA, since pine and cedar wood contain phenols that can cause respiratory problems in small animals. Ensure that the gerbils have sufficient bedding to dig through.

Gerbils will also appreciate a sand bath from time to time to keep their coats clean. Chinchilla sand is an option although aragonite sand is the best. Volcanic sand is another good option. Chinchilla dust is made for penetrating the chinchilla's thick fur and will just clog the lungs of gerbils and their owners from excessive inhalation! Sand bathing is very enjoyable for gerbils and it cleans the greases and oils in the coats. Not all gerbils will know how to bathe though, so rubbing the sand through their fur will have just as much benefit to keeping their fur clean.

Although the Mongolian Gerbil is a desert animal, they require fresh water at all times. Because of the gerbil’s active nature, it would be risky to place a dish or bowl of water in an enclosure as it would either be knocked over or filled with bedding which in turn would quickly turn it into a pool of unhealthy bacteria. Instead, use an easily accessible water bottle. Bottles that are custom made fit into many types of habitats or can be easily hung inside a glass tank with wire.

Food can be given through a relatively inexpensive dry food mix, many of which are easily found at grocery and pet stores, often labeled as “Hamster and Gerbil” food. Mixing in a seeded mix, such as wild bird food, is appreciated by the gerbils. Food bowls are not needed for gerbils but can be used if desired. A variety of gerbil, mouse and hamster mix can be offered, new foods do not need to be weaned into the main diet as gerbils thrive on a variety of food. When fresh vegetables or fruits are provided, be sure to clean out any uneaten portions after an hour or two.

Gerbil teeth, like the teeth of any rodent, grow constantly, so it is highly important to provide things for them to gnaw on. This wears the teeth down and keeps their growth in check. Wooden “toys” are offered at many pet stores for this purpose but there are many other house-hold things to offer gerbils too, such as the tube from a roll of paper towels, tissue boxes, etc. Wheels are something not all gerbils use, it is preferred to use a solid wheel to ensure legs or tails do not get caught in the wire.

There are other spotting "types". Any that don't conform to show standards are usually classed as patched.

These are just some examples of coat mutations. There are many more coat varieties in Mongolian gerbils.

Note: Although some US gerbil owners call some coat varieties "fox" ie yellow fox, the fox gene is not in gerbils and this is therefore incorrect.