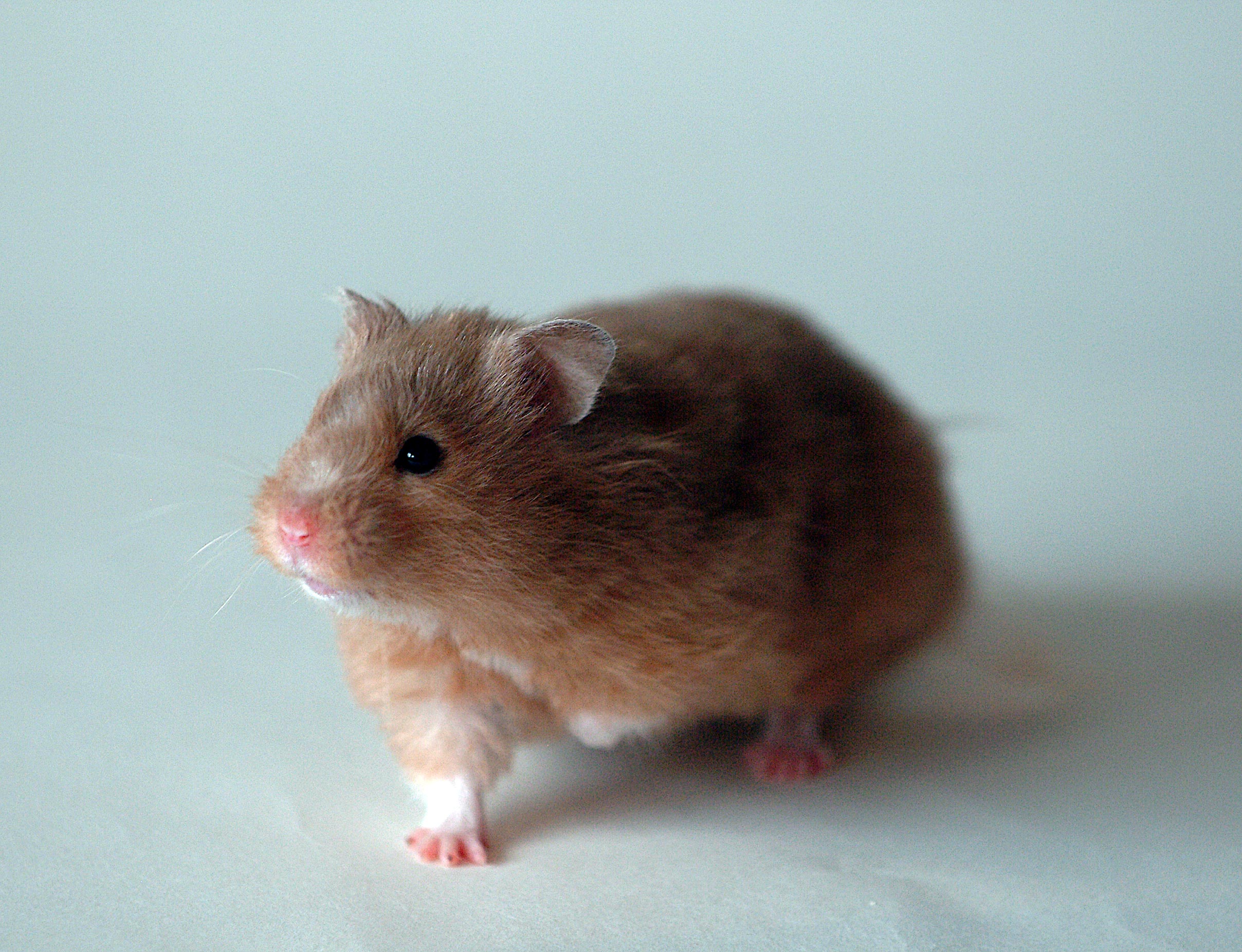 The Syrian or Golden Hamster, "Mesocricetus auratus", is a very well-known member of the , the s. In the wild they are now considered endangered, [IUCN2006|assessors=Baillie|year=1996|id=13219|title=Mesocricetus auratus|downloaded=9 May 2006 Listed as Endangered (EN B1+2c v2.3)] but are popular as housepets and scientific research animals. Adults grow from 5 to 7 inches (12.5 to 17.5 cm) in length, and will usually have a lifespan of 2 to 3 years.

Like most members of the subfamily, the Syrian Hamster has expandable cheek pouches, which extend from its cheeks to its shoulders. In the wild, hamsters are larder hoarders; they use their cheek pouches to transport food to their burrows. Their name in the local Arabic dialect where they were found translates to "father of saddlebags" due to the remarkable amount of storage space in their cheek pouches. If food is plentiful, they will store it in large amounts--it has been reported that 25 kg of grain was found in the burrow of a single hamster. Sexually mature female hamsters come into season () every four days. Syrian hamsters have the shortest gestation period in any known placental mammal at only 16 to 18 days. They can produce large litters of 20 or more young, although the average litter size is 8. If a mother hamster is inexperienced or feels threatened, she may abandon or even cannibalise her pups.

Hamsters are extremely territorial and will attack other individuals. The only exception is when a female and male come together when the female is in heat, and even so the female may attack the male after mating. Even brothers and sisters, once mature, will attack one another. In captivity, babies must be separated from their mother after 4 weeks, and the babies can be housed together only for a further 3 weeks, until sexually mature.

Syrian hamsters mark their burrow with secretions from special scent glands located on their hips. Male hamsters in particular lick their body near the glands, creating damp spots on the fur.

In British reportedly found an elderly female hamster in Syria, naming it "Cricetus auratus," the Golden Hamster. The hamster's fur went on display at the . The Syrian Hamster was then ignored by European science for the next century.

In 1930, , a zoologist and professor at the , captured a mother hamster and her litter of pups in , . The hamsters were bred in as laboratory animals. Some escaped from the cage through a hole in the floor, so that most of the Syrian hamsters in today are believed to be descended from this litter. [ [http://www.ppne.co.uk/index.php?m=show&id=30551 :: Professor Paul's Lives of the Great Naturalists: Israel Aharoni ] ] Because they were bigger than the ones Waterhouse found, they were named "Mesocricetus auratus", which is now the currently accepted scientific name of the Syrian Hamster.

Descendants of these hamsters were shipped to Britain in 1931, where they came under the care of the Wellcome Bureau of Scientific Research. They bred well and two more pairs were given to the in 1932. The descendants of these were passed on to private breeders in 1937. [Alderton, D., 2002, Hamster: a practical guide to caring for your hamster, Harper Collins Publishers Ltd, London.]

Soon after their initial discovery, Syrian hamsters were found to make great pets. Just about all captive Syrian Hamsters today are descended from the original litter found in Syria, except for a few that were brought into the United States by travellers who found them in the desert. A separate stock of hamsters were exported from Syria into the US in 1971, but it is not known if any of today's North American pets are descended from them. Recent genetic studies involving have confirmed that all domestic golden hamsters are descended from one female, obviously the one captured by Israel Aharoni in 1930. [ [http://www.amazon.com/gp/reader/0393020185/ The Seven Daughters of Eve: The Science That Reveals Our Genetic AncestryBryan Sykes pages 58-62] ISBN 0393020185 ]

Following professor Aharoni's collection in 1930, only infrequent sightings and captures were reported in the wild. Finally, to confirm the current existence of the wild Syrian hamster in northern Syria and southern , two expeditions were carried out during September 1997 and March 1999. The researchers found and mapped 30 burrows. None of the inhabited burrows contained more than one adult. The team caught six females and seven males. One female was pregnant and gave birth to six pups. All these 19 caught Syrian hamsters, together with three wild individuals from the University of Aleppo, were shipped to to form a new breeding stock.

Observations of females in this wild population have revealed that contrary to laboratory populations, activity patterns are crepuscular rather than nocturnal, possibly to avoid nocturnal predators such as owls. [Gattermann, R., Johnston, R.E., Yigit, N., et al., 2008, Golden hamsters are nocturnal in captivity but diurnal in nature, Biology Letters 4: 253-255.]

In captivity, Syrian hamsters follow well defined daily routines of wheel-running activity, which has made them popular subjects in research. They have a number of s that are readily observed, including scent-marking and body grooming, which is of interest in (the study of animal behaviour).

But by far the greatest use of hamsters is in biomedical research. Among other things, because captive Syrian hamsters are highly inbred (being descended from only a few captured individuals) they have a high incidence of a genetic heart condition causing . Several of hamsters have been developed as for human forms of . The gene responsible for hamster cardiomyopathy in a widely studied inbred hamster strain, BIO14.6, has been identified as being . [ Nigro V, Okazaki Y, Belsito A et al. Identification of the Syrian hamster cardiomyopathy gene. Human Molecular Genetics Vol. 6, 601-607, 1997. Link to abstract at [http://hmg.oxfordjournals.org/cgi/content/abstract/6/4/601] ] Pet hamsters are also potentially prone to , which is a not infrequent cause of unexpected sudden death in adolescent or young adult hamsters.

Syrian Hamsters are wildly popular as housepets due to their docile, inquisitive nature and small size. They are popular as "first pets" for young children, as well as being classroom animals, because of their hardiness and relative ease of care. Some pet owners find them more attractive than rats and other rodents due to their lack of visible tails. However, their lack of tolerance towards each other is seen by some as a drawback.

Most hamsters in American and British pet stores are Syrian Hamsters. Originally, Syrian Hamsters came in just one color — the mixture of brown, black, and gold which gave them their "Golden" name — but they have since developed a myriad of color mutations such as cream, white, blonde, banded, tortoiseshell, calico, and sable. Therefore, in pet stores today, "Golden Hamster" is only used to label the original coloration (also known as agouti). Other-colored short-hairs are banded under the label "Fancy Hamster".

Long-haired, "Angora", hamsters are commonly known as "Teddy Bear" hamster."Teddy Bear" is a term used to describe the long-haired variety of the Syrian Hamster, named so for their remarkable resemblance to toy teddy bears. The fur on a long-haired hamster is thick and fluffy, like a cotton wool, rather than the velvety feel of short-haired fur. People who are not allergic to short-haired hamsters can be allergic to long-hairs. Male teddy bear hamsters usually have much longer fur than the female variety, culminating in a "skirt" of longer fur around their backsides.

"Black Bears" are a recent off-shoot of teddy bear hamsters (mutation discovered in 1985), the major difference being their black-colored fur. It can be argued that black bears are just black teddy bears rather than their own breed; on the other hand, black bears were originally selectively bred for their larger size and more docile nature as well as their color. However, in current stock, this may or may not still be the case.