Mega Man: The Wily Wars, released in Japan as Rockman Mega World (ロックマン メガワールド?) is a video game compilation by Capcom for the Sega Mega Drive. The game features remakes of the first three Mega Man games (Mega Man, Mega Man 2, and Mega Man 3) that were originally released for the Nintendo Entertainment System. The Wily Wars was released in cartridge format in Japan and PAL regions. The North American Genesis version was available exclusively via the Sega Channel service.[5][6]

The premise of the compilation (as told in European promotional materials) involves the evil Dr. Wily traveling back in time in an attempt to defeat the robotic hero Mega Man in one their first three conflicts.[2][7] Each game follows a similar storyline in which Wily dispatches a set of powerful robots to take over the world and Mega Man single-handedly stops them. Note that the Japanese and in-game storyline doesn't refer to time travel; the only true storyline addition would be the exclusive Wily Tower game, which takes place directly after Mega Man 3. 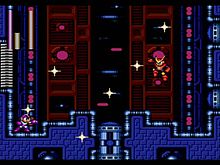 All three games have the player control the protagonist Mega Man through a series of platform stages which can be completed in any order. At the end of each stages is a boss battle with a Robot Master. The player will acquire that Robot Master's special weapon, which can then be selected and used throughout the rest of the game. Each game also features one or more support items that aid the player in reaching places the player cannot reach by normal means. Each Master Weapon and support item has limited energy that can be replenished by picking up items left by fallen enemies.

The compilation features an upgrade to the original games' visuals, as well as arranged music.[5][8] An important change is that the compilation provides battery back-up for each game. As a result, it is possible to continue Mega Man from a later point in the game, though Mega Man 2 and Mega Man 3 lost the password feature. The Wily Wars removes several glitches present in the NES versions of the game.[9] Upon completion of all three games, an exclusive game mode, called "Wily Tower", is made available to the player. In Wily Tower, Mega Man travels through three different stages fighting against a trio of new bosses called the "Genesis Unit": Buster Rod. G, Mega Water. S, and Hyper Storm. H.[9] After they are defeated, the player finally faces Wily in the titular tower. Wily Tower requires the player to equip Mega Man with eight weapons and three support items from any of the three main games to proceed.

Artist Keiji Inafune claimed that the development of Mega Man: The Wily Wars was outsourced and rather slowgoing. He described the debugging procedure for The Wily Wars as "an absolute nightmare", even helping out in process himself. "It was so bad," he recalled, "I found myself saying, 'I can't believe we've made it out of there alive.'"[2] Inafune based his designs of the three new Wily Tower bosses on characters from the ancient Chinese novel Journey to the West. Other than these characters, Inafune's only other illustrative contribution to the game was the depiction of Mega Man and Rush on the cover art.[2] The soundtrack of The Wily Wars consists of 16-bit versions of the original Mega Man musical scores, as well as new songs for the Wily Tower portion of the game. The composer for the Wily Wars has not been officially credited by Capcom. According to the game's sound effects creator Kouji Murata, Kinuyo Yamashita was responsible for the music composition and arrangement.[1] Prolific Basiscape composer Manabu Namiki did a chiptune-remixed of the Mega Water. S theme for the Chiptuned Rockman album in 2009.[10]

Following the success of Street Fighter II′: Special Champion Edition on the Mega Drive, rumors began circulating in the United States early 1994 that a Mega Man title was in the works for Sega's 16-bit system.[11] The Wily Wars was displayed by Sega of America at the Sega Summit sales meeting in May of that same year.[12] It was reported in the October issue of the United States magazine Game Players that the North American release The Wily Wars was put on hold indefinitely due to graphical problems.[13] However, the game was ultimately released in a non-cartridge format on the Sega Channel, a paid subscription service for Genesis games.[5]

Critical reception for Mega Man: The Wily Wars has been favorable. Christian Nutt and Justin Speer of GameSpot stated that the game is "a must for any serious Mega Man fan."[5] Sega-16 contributor Robert Menes summarized, "Although there's a few flaws that keep this from being an absolute must have, it's still Mega Man, and Mega Man games are among some of the best and brightest platformer series."[9] Jeremy Parrish of 1UP.com labeled Mega Man: The Wily Wars as "Not Worth It!" because certain design issues prevent it from aging as well as the NES versions of the games.[14] Mega Man: The Wily Wars has consistently ranked high among the editors of Nintendo Power as a game they would like to see on the Wii Virtual Console service.[15][16][17]