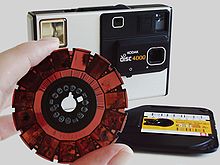 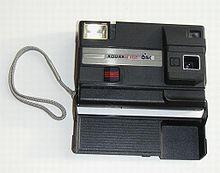 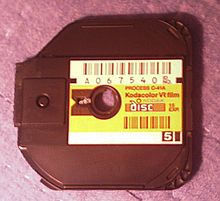 Disc film was a still-photography film format aimed at the consumer market, and introduced by Kodak in 1982.

The film was in the form of a flat disc, and was fully housed within a plastic cartridge. Each disc held fifteen 11 × 8 mm exposures, arranged around the outside of the disc, with the disc being rotated 24° between each image.

The system was primarily a consumer-oriented product, and most cameras were self-contained units with no expansion capability. The cameras were very simple to load and unload, and were generally completely automated. The cassette had a built-in dark slide to prevent stray light reaching the film when the disc was removed.

As the film was rotated on a disc instead of over a spool, the cassette was very thin, as were most of the cameras. The completely flat nature of the format also led to the (potential) advantage of greater sharpness over spool-based cassette formats (such as 110 and 126 film). Disc film has a very thick acetate base, comparable with 4×5" sheet film, which holds the film much flatter than the other formats.

Disc film did not prove hugely successful, mainly because the image on the negative was only 11 mm by 8 mm, leading to generally unacceptable grain and poor definition in the final prints. The film was intended to be printed with special 6-element lenses from Kodak, but many labs simply printed discs with standard 3-element lenses used for larger negative formats. The resulting prints often disappointed the consumer.

The film was officially discontinued by the last manufacturer, Kodak, on December 31, 1999, though the cameras had disappeared from the market long before then.

There were several different manufacturers of Disc film. Kodak produced films throughout the complete lifespan of the format, but 3M, Konica and Fuji also produced Disc film. While Kodak film was always eponymous, 3M and Konica made Disc film for many third parties, branded with the retailers logo. As with most photographic film, the country of manufacture is the best giveaway to the make.

Kodak's newest ideas with sharp fine-grained negative film were always tested in Disc format first, typically being one or two generations ahead of the equivalent 135 films.[citation needed]

There are still labs remaining in North America and the UK able to process disc film. Examples are DVD Your Memories, ScanDigital, Blue Moon Camera and Machine, Film Rescue, Dwayne's Photo, Rapid Photo Imaging Center Inc. and Rocky Mountain (reorganization in July 2010-still in operation but status unknown) in the USA, and Process C-22 in the UK, serving Europe. These are specialist services and each has its own advantages and disadvantages. The less expensive options provide a basic service while others are higher priced but include comprehensive digital corrections which greatly help improve the image quality of such long-expired film.

Disc film is not available to purchase new due to the very complex design. No manufacturers remain, nor are any likely to recommence production.