Born on 16 February 1786 in Saint Petersburg to the son of Catherine the Great of Russia and his wife - the daughter of Friedrich II Eugen, Duke of Württemberg - Maria Pavlovna was raised at her father's lavish palaces at Pavlovsk and at the nearby Gatchina.

She was the sister of:

As a child, she was not considered pretty: her features were disfigured as a result of a pioneering application of the Smallpox vaccine. Her grandmother, Catherine II of Russia, admired her precocious talent as a pianist but declared that she would have been better to have been born a boy. Her music instructor was Giuseppe Sarti (1729-1802), an Italian composer and Kapellmeister at the Russian court. From 1798, she was taught music by Ludwig-Wilhelm Tepper de Ferguson (1768-1838). In 1796 her grandmother died making her father the new Emperor of Russia as Paul I.

On 3 August 1804, she married Charles Frederick, Hereditary Grand Duke of Saxe-Weimar-Eisenach (later Grand Duke) (2 February 1783 – 8 July 1853). The couple stayed in Saint Petersburg for nine months, before departing for Weimar. There Maria was greeted with a bout of festivities, as described by Christoph Martin Wieland: "The most festive part of all the magnificence of balls, fireworks, promenades, comedies, illuminations was the widespread and genuine joy at the arrival of our new princess".

Maria and Carl had four children:

After the death of the Grand Duke Carl Friedrich in 1853 she retired from public life.

Her last trip to Russia was to the coronation of her nephew as Alexander II of Russia in 1855.

Patronage of arts and sciences 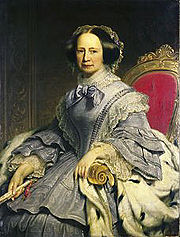 Maria Pavlovna was interested in arts as well as in sciences. She was a patroness of art, science and social welfare in the poor Grand-Dukedom of Saxe-Weimar-Eisenach. She maintained a lifelong correspondence with Vasily Zhukovsky and it was to her that Schiller dedicated one of his last poems. She attended ten courses at the University of Jena, some delivered by Alexander von Humboldt, and was instrumental in establishing the Falk Institute in Weimar.

She selected, as tutor to her son Charles Alexander, the Genevan Frédéric Soret, who became well acquainted with Johann Wolfgang von Goethe. In her later years, Maria Pavlovna invited Franz Liszt to her court, restoring a measure of artistic excellence previously associated with Weimar. However, her growing deafness prevented her from enjoying the premiere of Lohengrin in Weimar on 28 August 1850.

Most famous were the "Literary Evenings (Literarische Abende)" where scholars from the neighboring Jena University and others from outside the Grand-Dukedom were invited to give lectures on various topics. This circle was a focus in post-classical Weimar.

Several collections of the Jena University benefitted by her patronage, among them the Grandducal Oriental Coin Cabinet founded in 1840 by Johann Gustav Stickel, orientalist at the University.

Schiller praised her "talents in music and painting and genuine love of reading", while Goethe hailed her as one of the worthiest women of his time.

Her Traces in Jena and Weimar

She owned a small chalet close to Jena, owned formerly by the Protestant theologist of Enlightenment Griesbach, where she used to spend the summer with her children. Maria Pavlovna is buried in Weimar, in a Russian-style chapel by the side of the Goethe-Schiller Mausoleum.