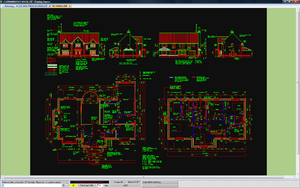 Drawing Express is a CAD software application for 2D and 3D design and drafting. It is used primarily by architects and builders, but the tools and commands present on the system can be adopted for use by landscape designers, surveyors, civil and construction engineers. The software is developed, sold and supported by the British company 'Trial Systems Ltd' based in Burton-upon-Trent, Staffordshire.[1] The software was first released in 1994, developed by Peter Boyce & Steven Pearce in conjunction with Anton Heymann. The software is based around a tablet and pen interface.[2] A graphics tablet, pen and overlay are used to select, use and manipulate commands thus mimicking the draughtsman’s drawing board. This differs from the traditional CAD software ‘drop-down’ menu structures on-screen as the menu system is laid out in front of the user. The method of drawing in this way is aimed at being intuitive allowing the user to create and amend drawings as quickly as possible.

There are two separate versions of the software aside from the standard Drawing Express package:

A 3D model can be created while displaying it in rendered mode in 'real time'. The 3D model is automatically created from the 2D plans including all walls, openings, and roof. Other information can be added to the model such as sky, landscaping, people and cars for detail. The model can be exported to POV-Ray and rendered off inside the raytracer software giving more resolution and detail. 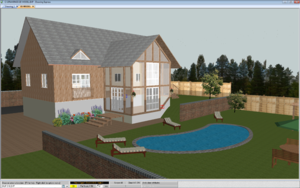 Drawing Express will also work on Mac OS X. This is possible on any Intel based Mac running Leopard, Snow Leopard or Lion operating systems by use of Parallels Desktop, VMware Fusion or built in Bootcamp software.

Drawing Express drawing file's use a .EXP file extension. The software can import and export DWG and DXF files amongst others. Drawings can also be saved to PDF format using any available PDF converter. Images can be imported and exported. Importing works with most mainstream image file formats.