Dragon Quest Swords: The Masked Queen and the Tower of Mirrors

Dragon Quest Swords: The Masked Queen and the Tower of Mirrors

Dragon Quest Swords: The Masked Queen and the Tower of Mirrors (ドラゴンクエストソード 仮面の女王と鏡の塔, Doragon Kuesto Sōdo: Kamen no Joō to Kagami no Tō?) is a first-person adventure game by Square Enix exclusive to Nintendo's Wii game console.[3] The game is a spin-off from the Dragon Quest series.

utilizes an on rails first person Battle System. However, instead of using a handgun, Dragon Quest Swords uses the functions of the Wii Remote as a sword and a shield. The direction of a sword slash is dependent on the direction the player sways the Wii Remote. In order to defend from incoming attacks, the player has to use the Wii Remote to block enemy attacks.

A special attack, called a master stroke, can be used once the special attack gauge is filled. The gauge percentage increases by hitting enemies, hitting their projectiles back at them, or by blocking attacks. There are many master strokes, the distinct groups are: ice, fire, lightning, shadow, and general. Each group has a distinct colour. However, general strokes and buddy strokes look the same. A buddy stroke is a master stroke that can only be performed once that ally has gotten to a certain level, along with being with the hero. Master strokes are learned by tempering swords and getting new swords, while buddy strokes are obtained from the player's current partner.

Only the hero's allies (Anlace, Fleurette or Claymore) can cast magic and only one of them can accompany the hero at a time. The player can set how frequently they use magic or they can use magic manually by bringing up the menu.

Instead of random battles, monsters will always appear in the same order, in the same place.

Dragon Quest Swords includes several minigames. They can be played alone, or with up to three friends. These are broken into two types of games that can be played at Stiletto's shop in town. One is a set of 3 dart games, in which the player uses the shield to catch darts, with different areas of the shield being worth different amounts of points. The second type is slime crisis, where the object of the game is to slay all the slimes as fast as possible. Both games award different prizes, based on points. The prize categories are for B, A, S, and X rank, with X being the highest. 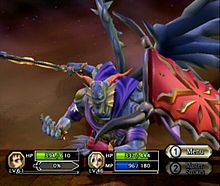 A fight against the final story mode boss, Xiphos.

Five years ago, there was a great war between man and an evil demon known as Xiphos, the Death Bringer. Through many hardships, man was able to defeat Xiphos. Five years later, the Hero and son of Claymore, who was one of the warriors who fought Xiphos, turned sixteen and had to go through a trial to become a warrior. He succeeds in the tasks and the next day, Prince Anlace asks the Hero to accompany him through the Galantyne Glades, where he saw his mother, the Queen, head off to. There, the Hero defeats Briquet, and proceeds towards a hut, where the Queen is seen wearing a strange mask. She walks away without saying a word. they also meet Fleurette, whose brother fought in the war against Xiphos. She mentions she saw the mask the Queen was wearing as a child. She heads to town and the next day, accompanies you to Arondight Heights to show you something. After defeating the Envoy of Xiphos, she shows you a carving on a mountainside of a battle against Xiphos, who was wearing the same mask the Queen was wearing. Fleurette explains that the war against Xiphos five years ago was not the first war against him. She deduces that the mask has Xiphos's spirit and is possessing the Queen. They head back to town and the next day, Claymore mentions that there was reports of a monster in the Secace Seacove. After beating the monster, Fleurette arrives to defend the monster from the Hero's finishing blow. She says that the monster is really her brother. The creature escapes into the water. the group leaves and learns that the Queen was seen at the Tower of Mirrors. When they reach the top of the tower, they battle and defeat Grossmesser, an archdemon with a German accent. They get to the Queen who has activated a portal in a mirror. The Hero slashes the mask in half, hoping to save the Queen. However, it is revealed, that the mask does not contain Xiphos's soul, but it actually weakened the demon. Xiphos appears in the portal, revealing that although, his body was destroyed five years ago, only the mask could truly destroy him forever. He mocks the Hero saying he destroyed the only means to defeat him. They take the Queen home when a mountain near Mount Arondight collapsed in a sea of lava and a castle rose up in its place. They know that without the mask, Xiphos can't be defeated. Dao, an old swordmaster, explains that the mask was made in the Mirror World and if the mask is to be repaired, they must enter the dimension by heading for the Tower of Mirrors. They make their way through the dimension and battle Draug. After beating him, he reveals he's a good guy and not only repairs the mask, but he also gives the Hero the Rednusadner, a powerful Blade that can hurt Xiphos and help them get to his castle. The Hero goes to Dao who teaches him the Figure of Fate, a legendary technique of the Rednusadner that created splits the sea of lava that surrounds the castle. After crossing the path, they encounter Golok the Gatekeeper, who the team defeats. After entering the castle and fighting many tough enemies, they make their way to Xiphos's throne room. They also find Fleurette's brother in the middle of the room. Xiphos enters her brother's body and gets his body back. He then engages the Hero in combat. After defeating Xiphos, the demon admits he underestimated the group. He turns into his true form, which looked nothing like the carving. Though it is a tough fight, the Hero subdues the demon long enough for the mask to place itself on Xiphos. The mask petrifies the demon and the Hero shatters the statue, destroying Xiphos for good. Fleurette's brother appears out of the rubble, now completely human. With Xiphos dead for all time, his castle starts to crumble down. Everyone tries to get out of the throne room when the Hero fall down the pit. Fleurette grabs him and the others pull him up. Back at the town's castle, a great party is held in the Hero's honor. He makes his way to a balcony and raises the Rednusadner to the sky, causing all the citizens to cheer.

There are ten specific areas in this game. The eight story mode areas, the second half of the eighth area, and the Olde Reflectory, which is a room unlocked after finishing story mode. It contains many bosses that were not in the story mode, along with stronger versions of some story mode bosses.

With the exception of the hero, whom the player is allowed to name, the game's major characters are all named after kinds of swords. Fleurette will call the hero a pet name. She will ask if "Blade" is OK. Clicking "Yes" will cause her to refer to the hero as "Blade" from then on. However, clicking "No" will allow the player to choose from other names. Also, with the exception of the Hero, all of the characters can only use magic during battles.

Originally planned to be a launch game for the Wii,[5] Dragon Quest Swords was released on July 12, 2007 in Japan. The game was released in North America on February 19, 2008. Under the spotlight of E3 2006 and in an unprecedented show of software support for a Nintendo console, Square Enix revealed that Dragon Quest Swords and Final Fantasy Crystal Chronicles: The Crystal Bearers would be exclusive Wii titles.[6] In a company press release, executive producer Yuu Miyake stated:[3]

The Dragon Quest Swords development team includes many of the original designers of Enix's flagship series. Creator Yuji Horii was one of the first game designers Nintendo president Satoru Iwata approached with the prototype Revolution controller. Horii contributed a video interview to Nintendo's Tokyo Game Show 2005 Revolution press conference. In it, he talked about making games accessible to a greater market, and cutting to the essence of "fun."[7] When asked about Nintendo's Wii Remote, Horii stated "I agree that many interesting games can be created using this controller, but I still think that Nintendo would probably make the best games."[8] Horii is joined by famed Dragon Ball creator Akira Toriyama and "the father of video game music" composer Koichi Sugiyama.[6]

According to video game website IGN, Square Enix representatives have branded Dragon Quest Swords a sequel to Kenshin Dragon Quest, a motion-activated plug-and-play TV game.[9] In a detailed preview of Dragon Quest Swords, IGN speculated that the game mechanics will be similar to those featured in Kenshin.[9] A short teaser video of a first-person perspective battle sequence appeared to confirm IGN's speculation as the onscreen protagonist mimicked the swordfighting antics of the Revolution Remote wielder.[10] Furthermore, Square Enix stated in a press release that the game "is being developed with every aspect of the unique Wii hardware in mind."[3] It has also recently been announced that the North American version will have extra features such as a playback mode and four hidden bosses.[11] The localization follows the style of other recent releases in the Dragon Quest series from Square Enix. Notably, the same team responsible for the English translation of Dragon Quest VIII, Plus Alpha Translations, is listed among the translators in the ending staff role.

A soundtrack was released on August 22, 2007, with music composed by Manami Matsumae. Koichi Sugiyama contributes four reprises from earlier Dragon Quest titles, but no original tracks.