The WH-1 Whammy pedal, the original whammy, first engineered and manufactured in 1989 by IVL Technologies and discontinued in 1993, remains the most sought-after.[1]

It is controlled by a rocker and a single rotary knob, from which 16 presets can be selected; five "Whammy" effects, nine "Harmony" effects, and two "Detune" effects.

Notable musicians who have made use of the WH-1 Whammy include: 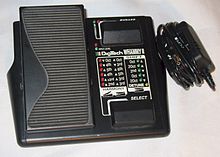 It is controlled by an expression pedal and a button which selects the settings, which are nearly the same as the WH-1. Its effects are as follows:

also has the ability to store one preset setting, which allows the user to choose any two modes and toggle between them using the setting select button

Notable musicians who have used the DigiTech Whammy include:

The XP-100 Whammy/Wah was more complex, incorporating both whammy and wah-wah possibilities.

It is controlled by a rocker, and a button which selects the 29 different presets; "Volume" effect, five "Wah-Wah" effects, six "Auto Wah" effects, eight "Whammy" effects, and nine "Harmony" effects.

List in categories (with modulation action of the pedal):

Notable musicians who have used the XP-100 include:

The Bass Whammy was a Whammy pedal built for bass guitar. It featured same chassis as the DigiTech Whammy II, but blue. It features different harmony options than the other Whammy models.

Notable musicians who have used the Bass Whammy include:

The Whammy IV; the current fourth edition, is closer to the WH-1 in terms of design but with several new features, such as MIDI control and a 'Divebomb' feature.

The controls are identical to the WH-1 controls, along with two new presets, "Divebomb" and "Droptune".

Notable musicians who have used the Whammy IV include:

In late 2008, effect manufacturer Molten Voltage devised a number of modifications for the Whammy IV pedal including Upper and Lower Pitch Limiter Controls which allow the player to set the limits of the expression pedal rather than using the octave presets.

In early 2010, Molten Voltage released Molten MIDI 2, which is cheaper than the original and has more features. Molten MIDI 2 is a programmable MIDI stompbox designed to control the Whammy 4, and gives users 5 new ways to control the Whammy. They can make looping arpeggios, with or without portamento, step through intervals not normally available on the Whammy (also with or without portamento), and step through the Whammy's presets settings. The new model is capable of being programmed manually or with a computer-based interface available on their website.[31]