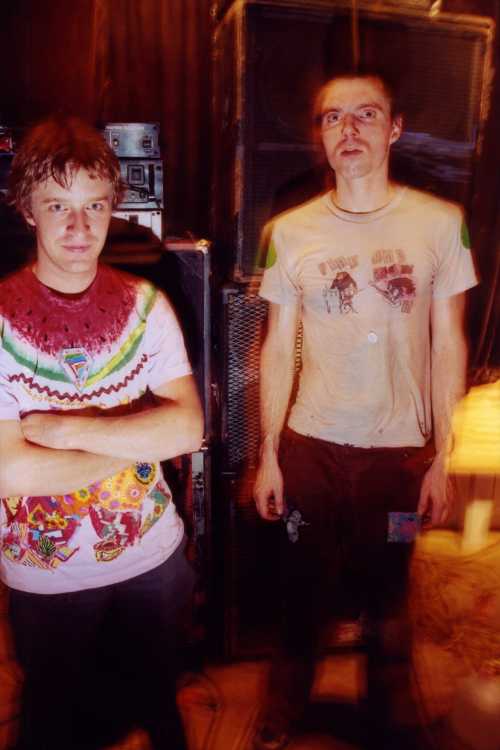 Lightning Bolt is a duo from , composed of on drums and vocals and Brian Gibson on . The band met and formed in 1994, when the members of the then-trio attended the . The band signed to in 1997, and released their self-titled debut the same year. In total, Lightning Bolt has released four full-length albums, numerous vinyl singles, and appeared on several compilations.

Lightning Bolt are known for their guerrilla-style live performances, where they typically play on the ground rather than a stage, with the crowd gathered around them. The band's sound is typically loud and aggressive, though the group cites composers and as compositional influences.

The band formed while Chippendale and Gibson attended the in , and Chippendale had heard about "a new kid" who was a whiz on the .

During these formative years, Chippendale and his freshman-year college roommate began to set up , a disused warehouse space in the Olneyville district of Providence. The space eventually came to house a number of local avant-garde artists and musicians, including as well as Lightning Bolt. [cite journal
url = http://www.tcj.com/256/e_thunder.html
title = Fort Thunder Forever
first = Tom
last = Spurgeon
publisher = ""
accessdate = 2008-01-23]

In 2006, Lightning Bolt was deported from Japan days after they arrived to continue their tour from the UK. Band members were detained on arrival on the grounds that they did not have work permits. Their official appeal was rejected after 48 hours, and they were deported back to the United States. [cite web
url = http://laserbeast.com/japan-border.html
publisher = Lightning Bolt
accessdate = 2008-01-23
title = Japan Tour Canceled] [cite web
url = http://www.drownedinsound.com/content/view/892638
publisher = Drowned in Sound
accessdate = 2008-01-23
title = Lightning Bolt rejected from Japan
first = Colin
last = Roberts]

Lightning Bolt have released a total of four full-length albums, a number of 7 inch singles and splits, and have appeared on numerous compilations. The band's first full-length album was a self-titled vinyl on the label. The record was initially released as a limited-edition vinyl of 750 pressings,

The band starred in the 2003 tour-DVD "". Lightning Bolt have also performed in DVD compilations such as "Pick a Winner" (2004) and "Sleep When You are Dead" by performance artists Mighty Robot (2007).

Rumors have persisted concerning the release of an improvisational album entitled "Frenzy".

The band's music takes cues from Japanese bands such as and Ruins, although composers and are acknowledged influences. The band's sound consists of Chippendale's frenetic drumming, his usually incomprehensible vocals, and Gibson's rhythmic bass guitar – an example of which is the song "13 Monsters", where Chippendale sings a playground style counting chant through heavy distortion over the instrumentals of his drums and Gibson's bass guitar.

As the group's vocalist, Chippendale eschews a conventional microphone, instead using the type of microphone built into a household telephone receiver, held in his mouth or attached to a hood, [cite web
url = http://www.villagevoice.com/music/0122,catucci,25128,22.html
publisher = ""
accessdate = 2008-01-23
first = nick
last = Catucci
title = Fear of Music] which is then run through an effects processor to further alter the sound. Chippendale has also used a KMD 8021 Drum Exciter, a simple drum-synth module, triggered by the bass drum.

Gibson plays his tuned to standard tuning, in intervals of fifths (C G D A), using a string for the high A. He used this four-string setup for several years, but has recently been seen using a five-string setup, tuned to C G D A E, with banjo strings for the A and E. [cite web
url = http://www.boston.com/ae/music/articles/2006/12/08/lightning_bolt_gets_a_real_charge_out_of_following_its_own_path/
accessdate = 2008-01-23
title = Lightning Bolt gets a real charge out of following its own path
publisher = ""
first = Mac
last = Daniel
date = ] Gibson also uses several effects pedals, including overdrive pedals, an octaver, a , and a (pitch shifter). [cite web
url = http://www.laserbeast.com/photos/052807/rendeiro-07.jpg
publisher = Lightning Bolt
author = John Rendeiro
title = Lightning Bolt – Photos]

Like many noise rock bands, Lightning Bolt mostly plays extremely loud, aggressive music. In the film "", Gibson attributes much of their success to volume:

We used to get more negative reactions when [we] didn't have as loud of stuff. It's just, be super loud and you're all set. (laughs) The rock and roll has been revealed. I do feel that that's the message - if there's any message, that's what it is. This is kinda what we do to keep ourselves excited these days. In "these" days - everyone knows what I'm talking about. (laughs)

The band has reportedly never been a fan of the studio recording process. When they recorded five tracks for their eponymous debut album released in 1999, they discarded four of them and replaced them with lo-fidelity tracks recorded at various live shows from 1997 and 1998. However, their following two albums, "" and "", were recorded more traditionally in a studio. For "", half the tracks were recorded in studio, while the rest were performed and recorded in a house direct to a 2-track DAT master tape, where the audio engineer was unable to tell exactly how the final result would sound.

Since the band has only two members and two instruments, their sound has a somewhat limited range, though this is often noted as a positive thing. In one interview, Gibson states that his experiences in Lightning Bolt "has showed [him] the power of an extremely limited palette."

Lightning Bolt are known for their so-called "s", preferring to play on the floor of the venue rather than the stage, creating a tight circle of spectators around the band.