DIET is a piece of software for grid-computing. As middleware, DIET sits between the operating system (which handles the details of the hardware) and the application software (which deals with the specific computational task at hand). DIET was created in 2000.[1] It was designed for high-performance computing. It is currently developed by INRIA, École Normale Supérieure de Lyon, CNRS, Claude Bernard University Lyon 1, SysFera. It is open-source software released under the CeCILL license.

Like NetSolve/GridSolve and Ninf, DIET is compliant with the GridRPC standard from the Open Grid Forum.[2]

The aim of the DIET project is to develop a set of tools to build computational servers. The distributed resources are managed in a transparent way through the middleware. It can work with workstations, clusters, Grids and Clouds.

Usually, GridRPC environments have five different components: clients that submit problems to servers, servers that solve the problems sent by clients, a database that contains information about software and hardware resources, a scheduler that chooses an appropriate server depending on the problem sent and the information contained in the database, and monitors that get information about the status of the computational resources.

DIET's architecture follows a different design. It is composed of: 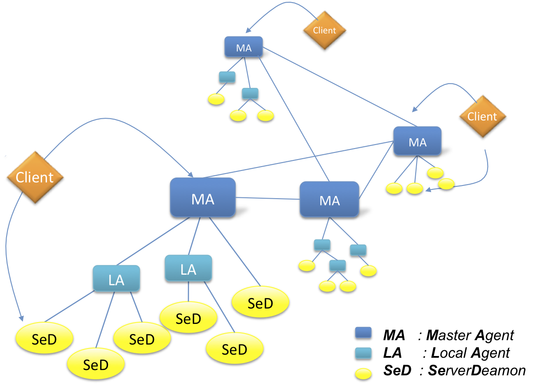 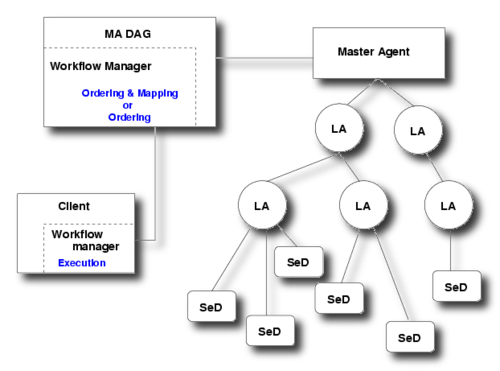 DIET provides a degree of control over the scheduling subsystem via plug-in schedulers.[3] When a service request from an application arrives at a SeD, the SeD creates a performance-estimation vector, a collection of performance-estimation values that are pertinent to the scheduling process for that application. The values to be stored in this structure can be either values provided by CoRI (Collectors of Resource Information) or custom values generated by the SeD itself. The design of the estimation vector's subsystem is modular.

CoRI generates a basic set of performance-estimation values which are stored in the estimation vector and identified by system-defined tags. Information such as the number of cores, the total memory, the number of bogomips, and hard drive speed, etc., which are static, as well as dynamic information like the predicted time to solve a problem on the given resource, the average CPU load, is thus transferred from the Server Daemon to the scheduler agent in order to provide pertinent information for a better scheduling. As mentionned above, these are used in correlation with the application-driven scheduler possibility in DIET: the Server Daemon, which has a better understanding of the application needs, can request for a specific scheduling relaying on the information stored in this vector.

Three differents data managers have been integrated into DIET: 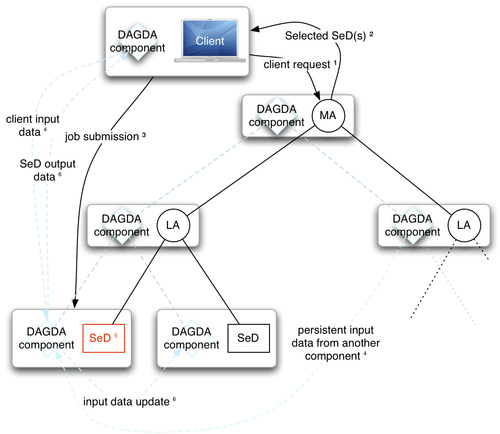 Parallel resources are generally accessible through a LRMS (Local Resource Management System), also called a batch system. DIET provides an interface with several existing LRMS to execute jobs: LoadLeveler on IBM resources, OpenPBS which is a fork of the well-know PBS system, and OAR developped by IMAG at Grenoble, and used on the Grid'5000 research grid. Most of the submitted jobs are parallel jobs, coded using the MPI standard with an instantiation such as MPICH or LAM.

A Cloud extension for DIET was created in 2009.[5] DIET is thus able to access Cloud resources through two existing Cloud providers: