The second season of the animated television series, Aqua Teen Hunger Force originally aired in the United States on Cartoon Network's late night programming block, Adult Swim. Season two started on May 25, 2003 with "Super Birthday Snake" and ended with "The Last One" on December 31, 2003, with a total of twenty four episodes.

With a total of twenty four episodes, Season Two is the longest season of Aqua Teen Hunger Force. The first ten episodes in Season Two (except for "The Meat Zone") feature the word "Super" in the title. Many episodes from this season include the word "the" in the title, including one episode that is simply titled "The".

Season Two is the last season to feature cold openings with Dr. Weird and Steve. After "The Cloning", Dr. Weird and Steve do not return until the 2007 movie, Aqua Teen Hunger Force Colon Movie Film for Theaters. After the movie, the only mention of them is a non-speaking cameo of Dr. Weird in the Season Seven episode, "One Hundred". Although this season is the last one to feature Dr. Weird and Steve as regulars, at Dragon*Con 2010 series creator, Dave Willis confirmed that they would be returning as series regulars in the upcoming season eight.[1]

Season Two also features "The Last One", which features the return of many villains from Seasons One and Two. Led by the Mooninites, the villains team up as a Legion of Doom-styled group in an attempt to put and end to Master Shake, Meatwad, and Frylock. There plan does not work, and many of the villains end up dying.

The remaining episodes from season two were released in the Volume Three DVD on November 16, 2004. Additionally, the episodes are also available on iTunes and the "Build Your own DVD" feature on the Adult Swim website. 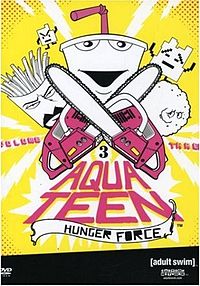