AMD CrossFireX (previously known as CrossFire) is a brand name for the multi-GPU solution by Advanced Micro Devices, originally developed by ATI Technologies. The technology allows up to four GPUs to be used in a single computer to improve graphics performance.

CrossFire was first made available to the public on September 27, 2005.[1] The system required a CrossFire-compliant motherboard with a pair of ATI Radeon PCI Express (PCIe) graphics cards. Radeon x800s, x850s, x1800s and x1900s came in a regular edition, and a 'CrossFire Edition' which has 'master' capability built into the hardware. 'Master' capability is a term used for 5 extra image compositing chips, which combine the output of both cards.[2] One had to buy a Master card, and pair it with a regular card from the same series. The Master card shipped with a proprietary DVI Y-dongle, which plugged into the primary DVI ports on both cards, and into the monitor cable. This dongle serves as the main link between both cards, sending incomplete images between them, and complete images to the monitor. Low-end Radeon x1300 and x1600 cards have no 'CrossFire Edition' but are enabled via software, with communication forwarded via the standard PCI Express slots on the motherboard. ATI currently has not created the infrastructure to allow FireGL cards to be set up in a CrossFire configuration. The 'slave' graphics card needed to be from the same family as the 'master'.

An example of a limitation in regard to a Master-card configuration would be the first-generation CrossFire implementation in the Radeon X850 XT Master Card. Because it used a compositing chip from Silicon Image (SiI 163B TMDS), the maximum resolution on an X850 CrossFire setup was limited to 1600×1200 at 60 Hz, or 1920×1440 at 52 Hz. This was considered a problem for CRT owners wishing to use CrossFire to play games at high resolutions, or owners of Widescreen LCD monitors. As many people found a 60 Hz refresh rate with a CRT to strain one's eyes, the practical resolution limit became 1280×1024, which did not push CrossFire enough to justify the cost.[3] The next generation of CrossFire, as employed by the X1800 Master cards, used two sets of compositing chips and a custom double density dual-link DVI Y-dongle to double the bandwidth between cards, raising the maximum resolution and refresh rate to far higher levels.

When used with ATI's "CrossFire Xpress 3200" motherboard chipset, the 'master' card is no longer required for every "CrossFire Ready" card (with the exception of the Radeon X1900 series). With the CrossFire Xpress 3200, two normal cards can be run in a Crossfire setup, using the PCI-E bus for communications. This is similar to X1300 CrossFire, which also uses PCI Express, except that the Xpress 3200 had been built for low-latency and high-speed communication between graphics cards.[4] While performance was impacted, this move was viewed as an overall improvement in market strategy, because Crossfire Master cards were expensive, in very high demand, and largely unavailable at the retail level.

Although the CrossFire Xpress 3200 chipset is indeed capable of CrossFire through the PCI-e bus for every Radeon series below the X1900s, the driver accommodations for this CrossFire method has not yet materialized for the X1800 series. ATI has said that future revisions of the Catalyst driver suite will contain what is required for X1800 dongleless CrossFire, but has not yet mentioned a specific date. 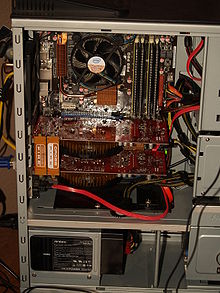 With the release of the Radeon X1950 Pro (RV570 GPU), ATI has completely revised CrossFire's connection infrastructure to further eliminate the need for past Y-dongle/Master card and slave card configurations for CrossFire to operate. ATI's CrossFire connector is now a ribbon-like connector attached to the top of each graphics adapter, similar to nVidia's SLI bridges, but different in physical and logical natures.[5] As such, Master Cards no longer exist, and are not required for maximum performance. Two dongles can be used per card; these were put to full use with the release of CrossFireX. Radeon HD 2900 and HD 3000 series cards use the same ribbon connectors, but the HD 3800 series of cards only require one ribbon connector, to facilitate CrossFireX.[6] Unlike older series of Radeon cards, different HD 3800 series cards can be combined in CrossFire, each with separate clock control.

Since the release of the codenamed Spider desktop platform from AMD on November 19, 2007, the CrossFire setup has been updated with support for a maximum of four video cards with the 790FX chipset; the CrossFire branding was then changed to "ATI CrossFireX". The setup, which, according to internal testing by AMD, will bring at least 3.2x performance[citation needed] increase in several games and applications which required massive graphics capabilities of the computer system, is targeted to the enthusiast market.

A later development to the CrossFire infrastructure includes a dual GPU solution with on-board PCI-E bridge that was released in early 2008, the Radeon HD 3870 X2 and later in Radeon HD 4870 X2 graphics cards, featuring only one CrossFire connector for dual card, four GPU scalability.

There is also a “hybrid” mode of CrossFireX which combines on-board graphics using the AMD northbridge architecture with select[7] graphic cards. The current generation[8] is called Hybrid CrossFireX and is available for motherboards with integrated AMD chipsets in the 7 and 8 series IGPs, referred to as Hybrid CrossFire X. It allows combining discrete video card(s[9] [10]) and the IGP for increased performance.[7] [11] This combination results in power-savings when simple or 2D graphics are used and performance increases of 25% to over 200% in 3D graphics over using a non CrossFire option.[12] [13]