County Route 72 (CR 72) is a 1.6-mile (2.6 km) west–east county-maintained highway in the western part of Rockland County, New York, in the United States. CR 72 begins at the Orange County line in Sloatsburg and Eagle Valley, and ends at NY 17 (NY 17). It runs exclusively through Sloatsburg, and is the only Rockland County Route to intersect NY 17. After the western terminus, CR 72 continues as Orange County Route 72 until reaching the New Jersey border. It is the only road in Rockland County that eventually leads into Passaic County, New Jersey. After crossing the New Jersey border, Sloatsburg Road proceeds south through Ringwood Manor State Park before ending at Passaic CR 511.

CR 72 is one of two county routes that are shared by Rockland and Orange County. The other is County Route 106. The total length combined for Orange CR 72 and Rockland CR is 3.4 miles (1.8 in Orange and 1.6 in Rockland). 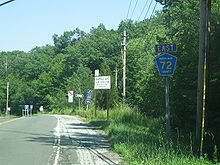 CR 72 at the Orange/Rockland County line in Sloatsburg

Rockland County Route 72 begins at the Orange county line in Eagle Valley. The road, now known as Sterling Mine Road, enters Rockland briefly before turning back into Orange County for a short distance. It returns to Rockland County and intersects with CR 68 at 0.1 miles (0.2 km). CR 86 now parallels Route 72 as it heads into Sloatsburg. The main highway heads to north for a short distance before turning to the south. Route 72 enters the community of Sterlington and terminates at an interchange with NY 17 just south of downtown Sloatsburg.[1] 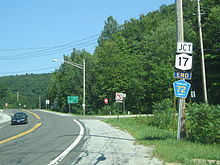 County Route 72 mainly resides in Sloatsburg, New York. Sloatsburg dates back to the Indian name of Pothat, being renamed after the Sloat family, who had come to the country in 1639 from Denmark. The Sloat family eventually settled in America in 1754. Along nearby NY 17, the Sloat family's house still stands.[2]

The entire route is in Rockland County.