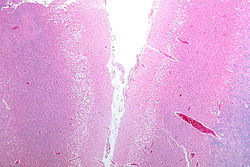 It is seen in the context of cerebral hypoxic-ischemic insults, i.e. strokes.