Law enforcement was first taken by the military stationed in Portuguese Macau, with Portuguese Navy troops at first before the Portuguese Army stepped in to take over internal security duties on March 14, 1691.[2] A small garrison was raised to conduct police work at fist, but had the majority of its duties taken over by India-based soldiers in 1784. On May 13, 1810, the Prince Regent Battalion was created to be the colony's police force, consisting of four companies of 400 men. Two companies were based at the Customs House while the other two was based at the Mount Fortress.

On March 3, 1841, a royal decree had approved the creation of a permanent police force, which was staffed by Macanese citizens who were not part of the battalion.[2] A group of night watchmen called the Guard's Bazar was created by Bernardino de Senna Fernandes with some assistance from local Macanese Chinese to patrol residential areas at night, which was recognized as a legal law enforcement body by the Portuguese Macau government. With an initial count of 50 men, it was soon raised with 100 men. In 1861, the governor passed an ordnance that renamed the force from Macau Police to the Macau Police Force (Abbreviation: CPM; Portuguese: Corpo de Polícia de Macau).[2] In 1862, the CPM was given the power to patrol the colony's waters through Ordnance No. 56, November 18, 1862 under 1868 when the role was assigned to the Macau Port Police (Abbreviation: PPM; Portuguese: Polícia do Porto de Macau).[2] Moors were recruited into the ranks in 1873 with a Moor section established on August 9, 1874.

Governor Eugenio Carlos Correa da Silva dissolved the CPM on January 18, 1879, replacing it with the Macau Police Guard (Abbreviation: GPM; Portuguese: Guarda de Polícia de Macau).[2] They were based at the Barracks San Francisco as part of the GPM's establishment. In 1912, Provincial Ordnance no. 106, June 10, 1912 had called for the GPM to be led by a county administrator, being assisted by both staff and police officers alike. Daniel Ferreira, the county administrator in 1914, created the police force's civil branch with a strength of 300 officers. A security police branch was established in 1916, with a strength of 304 officers paid with a salary of 7,810 MOP.[2]

The post of Police Commissioner of Public Security in Macau was made separate from the colony administrator under Executive Order 533 in 1937, with the creation of the PSP (modelled after the Portuguese Homeland PSP) at first under the command of a captain or a lieutenant in the Portuguese Army.[2] The PSP's police band was created in 1951 under Luis Augusto de Matos Paletti to serve as the force's ceremonial unit in official events. A social recovery center was created in 1961 to help take care of troubled people such as orphans, homeless or foreign nationals living in Macau without any permanent residence. By May 1968, the PSP served as a military organization under the Portuguese colonial government. Female officers were first recruited by the PSP on October 7, 1974 when 42 candidates were accepted into service. Decree-Law No. 705/75 of December 27, 1975 placed the PSP under the Security Forces of Macau alongside the Marine Police, Fiscal Police and the Fire Department.[2]

Further restructuring of the PSP took place in 1981 when Decree No. 37/81/M was passed to amend the earlier Decree No. 22/77/M. It established the PSP's divisions consisting of Command, Division of Police Macau Police Division of the Isles, Police Tactical Intervention Unit, Division of Transit Services, Migration and Identity, Music Band, Center for Recovery and Social Welfare.[2] The PSP's Police School was created on July 18, 1982 with Portuguese officers serving as the institution's first instructors. Another round of restructuring took place on February 8, 1986 with the passing of Decree-Law No. 13/86/M, which created additional PSP divisions, consisting of Command, General Staff and Command organs, Divisions of Police and General Support, Organs Support Services and Education.[2]

In 1999, Lieutenant Colonel Manuel António Meireles de Carvalho passed on command of the PSP to its new commander, Superintendent General Jose Proença Branco. With the transfer of sovereignty on December 20 of that year, the PSP changed its emblem, replacing the former Portuguese coat of arms with that of the Special Administrative Region .

The PSP's Police School moved its location from its old headquarters at the Center for Social Recovery and began work on the Academy of Security Forces at Coloane after the People's Liberation Army Macau Garrison was created in Macau on May 2000. 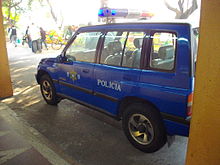 A Suzuki Vitara with blue PSPF markings and emergency lights.

All marked vehicles employed by the CPSP have an all blue finish with the seal of the force. Previously, all of them had a white finish.

The following ranks are currently observed by the CPSPM:[3]

The PSP is commanded by a Superintendent General, who is assisted by two secondary commanders.