Women in the military

Women in the military

Women in the military have a history that extends over 4,000 years into the past, throughout a vast number of cultures and nations. Women have played many roles in the military, from ancient warrior women, to the women currently serving in conflicts.

Despite various roles in the armies of past societies, the role of women in the military, particularly in combat, is controversial and it is only recently that women have begun to be given a more prominent role in contemporary armed forces. As increasing numbers of countries begin to expand the role of women in their militaries, the debate continues. 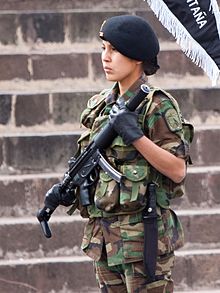 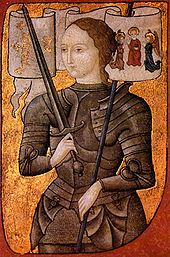 Medieval depiction of Joan of Arc. 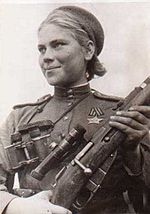 From the beginning of the 1970s, most Western armies began to admit women to serve active duty.[2] Only some of them permit women to fill active combat roles, including Australia, New Zealand, Canada, Denmark, Finland, France, Italy, Germany, Norway, Israel, Serbia, Sweden and Switzerland. Other nations allow female soldiers to serve in certain Combat Arms positions, such as Greece, India, the United Kingdom and the United States, which allows women to serve in Artillery roles, while still excluding them from units with a dedicated Infantry role. The United States allows women in most combat flying positions. Turkey uses female officers in combat flying (bombardment) missions over Northern Iraq and in ISAF patrol missions in Kabul, Afghanistan. Pakistan employs women in Air Force and has used female fighter pilots in search, monitoring and bombardment operations in her war against militancy.Pakistani female fighter pilots have also participated in international exercises and are currently deployed on supersonic F-7 fighter jets.

Several points of argument have been put forward by those in favor of women serving in combat conditions as well as those against the idea.

The female skeletal system is less dense, and more prone to breakages.[3][4] There was also concern that, in aviation, the female body is not as adept at handling the increased g-forces experienced by combat pilots; in fact, there is now evidence that the male body is less able to handle the g-forces than the female body: women are less likely to black out due to shorter blood vessel routes in the neck.[citation needed] Furthermore, health issues regarding women are argued as the reason that some submarine services avoid accepting women, although mixed-gender accommodations in a small space is also an issue, as is explained in more depth below.[5] The Center for Military Readiness, an organization that seeks to limit women's participation in the military, stated that “Female soldiers [are], on average, shorter and smaller than men, with 45-50% less upper body strength and 25-30% less aerobic capacity, which is essential for endurance”.[5]

However, an article in the Army Times July 29, 1996, states that some women do possess the physical attributes suitable to become combat soldiers.[6]

The disruption of a combat unit's esprit de corps is cited as another reason for women to be banned from front-line combat situations. Indeed, many soldiers have stated that they could not trust a woman to perform her duties in a place where trusting their fellow soldier would be critical.[7][6][8]

There is a secondary concern that romantic relationships between men and women on the front lines could disrupt a unit's fighting capability and a fear that a high number of women would deliberately become pregnant in order to escape combat duties.[9][10]

In the British Army, which continues to bar women from serving in infantry-roled units, all recruits joining to fill infantry vacancies partake in a separate training program called the Combat Infantryman's Course.

In the American armed forces, the 1994 rules forbidding female involvement in combat units of brigade size or smaller are being bent. Colonel Cheri Provancha, stationed in Iraq, argues that: "This war has proven that we need to revisit the policy, because they are out there doing it."[11]

A third argument against the inclusion of women in combat units is that placing women in combat where they are at risk of being captured and tortured and possibly sexually assaulted is unacceptable. In a Presidential Commission report it was found that male POWs, while being subject to physical abuse, were never subject to sexual abuse, and women were almost always subject to sexual abuse.[10] Rhonda Cornum, then a major and flight surgeon, and now a Brigadier General and Command Surgeon for United States Army Forces Command, was an Iraqi POW in 1991. At the time, she was asked not to mention that she had been molested while in captivity.[12] Cornum subsequently disclosed the attack, but said "A lot of people make a big deal about getting molested," she noted later, adding: "But in the hierarchy of things that were going wrong, that was pretty low on my list".

Finally, there is the argument that by not incorporating women into combat, the American government is failing to tap into another source of soldiers for military combat operations. This argument claims that the government is creating a military that treats women as second-class citizens and not equals of men.[13] Other observers state that without women, the military would have numerous manpower shortfalls they would not be able to fill.[14]

In On Killing: The Psychological Cost of Learning to Kill in War and Society, Lt. Col. Dave Grossman briefly mentions that female soldiers in the Israel Defense Forces have been officially prohibited from serving in close combat military operations since 1948. (However, in 2001, subsequent to publication, women did begin serving in IDF combat units on an experimental basis.) The reason for removing female soldiers from the front lines was due less to the performance of female soldiers, and more due to the behavior of the male infantrymen after witnessing a woman wounded. The IDF saw a complete loss of control over soldiers who apparently experienced an uncontrollable, protective, instinctual aggression, severely degrading the unit's combat effectiveness.

Grossman also notes that Islamic militants rarely, if ever, surrender to female soldiers. In modern warfare where intelligence is perhaps more important than enemy casualties, every factor reducing combatants' willingness to fight is considered. Similarly, Iraqi and Afghan civilians are often not intimidated by female soldiers. However, in such environments, having female soldiers serving within a combat unit does have the advantage of allowing for searches on female civilians, and in some cases the female areas of segregated mosques, while causing less offense amongst the occupied population. A notable example of this would be female US military personnel who are specially selected to participate in patrols and raids for this purpose. One example of this type of unit is the USMC Lioness program, which used female Marines to search females [15] at checkpoints both on the Iraq-Syrian border [16] and inside urban areas. [17] Another example is the US Army Cultural Support Teams (CSTs). These units, designed to accompany special operations teams and work alongside them in deployed environments, are intended to provide access to the information and needs of local community women in communities where contact between male Soldiers and civilian women is culturally fraught. [18]

Melody Kemp mentions that the Australian soldiers have voiced similar concern saying these soldiers "are reluctant to take women on reconnaissance or special operations, as they fear that in the case of combat or discovery, their priority will be to save the women and not to complete the mission. Thus while men might be able to be programmed to kill, it is not as easy to program men to neglect women."[19]

In 1985, the Royal Norwegian Navy became the first [20][21] navy in the world to permit female personnel to serve in submarines, followed by the appointment of a female submarine captain in 1995.[22] The Danish Navy allowed women on submarines in 1988, the Swedish Navy in 1989,[21] followed by the Royal Australian Navy in 1998 and thereafter Canada and Spain,[23] all operators of conventional submarines.

Recent US Navy policy allowed three exceptions for women being on board military submarines: (1) Female civilian technicians for a few days at most; (2) Women midshipmen on an overnight during summer training for both Navy ROTC and Naval Academy; (3) Family members for one-day dependent cruises.[25]

In October 2009, the U. S. Secretary of the Navy, Ray Mabus announced that he and the Chief of Naval Operations were moving aggressively to change the policy.[26] Reasons included the fact that larger SSGN and SSBN submarines now in the Fleet had more available space and could accommodate female Officers with little or no modification. Also, the availability of qualified female candidates with the desire to serve in this capacity was cited. It was noted that women now represented 15% of the Active Duty Navy [27] and that women today earn about half of all science and engineering bachelor’s degrees. A policy change was deemed to serve the aspirations of women, the mission of the Navy and the strength of its submarine force.[28][29]

In February 2010, the Secretary of Defense approved the proposed policy and signed letters formally notifying Congress of the intended change. After receiving no objection, the Department of the Navy officially announced on April 29, 2010, that it had authorized women to serve onboard submarines.[30]

In the late 20th century and early 21st century, there have been a significant representations of "women warriors" in popular culture, occasionally including women in the military, such as the films G. I. Jane and Down Periscope.

In 2007, author Kirsten Holmstedt released Band of Sisters: American Women at War in Iraq. The book presents twelve stories of American women on the frontlines including America's first female pilot to be shot down and survive, the U.S. military's first black female combat pilot, a 21-year-old turret gunner defending a convoy, two military policewomen in a firefight and a nurse struggling to save lives, including her own. Her second book, The Girls Come Marching Home: Stories of Women Warriors Returning from Iraq details the lives of women who served in combat after they come home.

A television movie about Margarethe Cammermeyer called Serving in Silence, was made in 1995, with Glenn Close starring as Cammermeyer. Cammermeyer, a retired colonel in the Washington National Guard,[31] disclosed in 1989 that she was a lesbian. The movie's content was largely taken from Cammermeyer's autobiography of the same name.

In the People's Republic of China, one of the Eight Model Plays was Red Detachment of Women, which concerns female units in the Maoist military.

A notable tendency of science fiction since the 1940s is to place women in dominant military roles. These are often command positions, in some cases for the express purpose of having a woman in command (as was the case for Captain Kathryn Janeway, where the ship having a female captain was used as a selling point). In some cases, this is accompanied by a complete desegregation of the sexes, such as in Starship Troopers, where no one showed any compunctions about undressing, showering, etc. in front of the other gender.[32]

Another example, from the Stargate franchise, is Major (later Colonel) Samantha Carter, an air force officer who was placed in command of a front-line unit.

Women openly serve in both frontline infantry and special operations units in the game series Mass Effect and Gears of War.

In numerous games, such as Starcraft, women appear as fierce warriors.

“Michele Jones: A History of Firsts.” The Story of America's Black Patriots http://www.forloveofliberty.net/stories/michele-jones-history-firsts/36