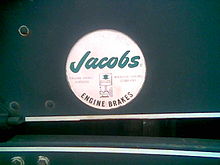 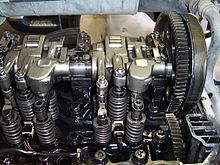 A view of engine compression brake rocker arm (on the left).

A compression release engine brake, frequently called a Jake brake or Jacobs brake, is an engine braking mechanism installed on some diesel engines. When activated, it opens exhaust valves in the cylinders, releasing the compressed air trapped in the cylinders, and slowing the vehicle.

Although Jake brake properly refers to the Jacobs brand of engine brakes, the term has become a genericized trademark and is often used to refer to engine brakes or compression release engine brakes in general, especially on large vehicles or heavy equipment.

When the driver releases the accelerator on a moving vehicle powered by a diesel engine, the vehicle's forward momentum continues to turn the engine's crankshaft, drawing air into the cylinders as the pistons move down and compressing that air as the pistons move back up. The pressure of the compressed air pushes back on the up-going piston, tending to slow the vehicle.

But, without a compression release mechanism, as the piston passes through top dead center and heads back down again, the compressed air in the cylinder acts as a spring and pushes the piston down, returning most of the work done in compression back to the crankshaft, tending to accelerate the vehicle. The net effect is that the engine turns freely and the vehicle coasts.

With a gasoline engine, the mechanics are different and a special valve is not necessary for engine braking to happen when the driver releases the accelerator. In the gasoline engine, with the accelerator released, a throttle prevents the free flow of air into the cylinders, so there is little pressure to release at the top of the compression stroke. The throttle itself provides engine braking through friction in the air flowing through it. But a diesel engine does not have a butterfly valve to limit air on the intake side.

A compression release engine brake uses an extra lobe on the camshaft to open a second exhaust valve at the top of the compression stroke. The stem of this valve telescopes during normal operation so the valve remains closed, but is locked at full length by a solenoid when the engine brake is engaged so that the valve opens as directed by the cam. This releases the compressed air in the cylinder as described above.

The name is derived from the manufacturer, Jacobs (of drill chuck fame), and was patented 1962-'65 by Clessie Cummins.[1]

The use of compression release engine brakes may cause a vehicle to make a loud chattering or "machine gun" exhaust noise, especially vehicles having high flow mufflers, or no mufflers at all, causing many communities in the United States to prohibit compression braking within municipal limits. Drivers are notified by roadside signs with legends such as "Brake Retarders Prohibited," "Engine Braking Restricted," "Jake Brakes Prohibited," "No Jake Brakes," "Compression Braking Prohibited," or "Unmuffled Compression Braking Prohibited," and enforcement is typically through traffic fines. Such prohibitions have led to the development of new types of mufflers and turbochargers to better silence compression braking noise.