Biela's Comet or Comet Biela (official designation: 3D/Biela) was a periodic comet first recorded in 1772 by Montaigne and Messier and finally identified as periodic in 1826 by Wilhelm von Biela. It was subsequently observed to split in two and has not been seen since 1852. As a result it is currently considered to have been destroyed, although remnants appeared to have survived for some time as a meteor shower.

The comet was first recorded on 8 March 1772 by Jacques Leibax Montaigne;[2] during the same apparition it was independently discovered by Charles Messier. It was also recorded in 1805 by Jean-Louis Pons, but was not recognized as the same object. After the 1772 and 1805 apparitions a number of attempts were made by Lalande (1774), Gauss (1806) and Bessel (1806) to calculate a definitive orbit, Gauss and Olbers both noting a similarity between the 1805 and 1772 comets, but it was not possible to prove a link.[2]

It was Wilhelm von Biela, an army officer serving at the fortress town of Josefstadt, who observed the comet during its 1826 perihelion approach (on February 27) and calculated its orbit, discovering it to be periodic with a period of 6.6 years. At the time it was only the third comet known to be periodic, after the famous comets Halley and Encke. The comet was named after Biela, although there was initially some controversy due to a later but independent discovery by Jean-Félix Adolphe Gambart, who also provided the first mathematical proof linking the 1826 and 1805 comets (letters from Biela and Gambart were published in the same issue of the Astronomische Nachrichten). A third claim was made by Thomas Clausen, who had independently linked the comets.

The comet appeared as predicted during its 1832 apparition, when it was first recovered by John Herschel on 24 September.[2] The orbital elements and ephemeris calculated by Olbers for this return created something of a popular sensation, as they showed that the comet's coma would likely pass through the Earth's orbit during a close approach on October 29. Subsequent predictions, in the media of the time, of the Earth's likely destruction overlooked the fact that the Earth itself would not reach this point until November 30, a month later, as pointed out by François Arago in an article designed to allay public fears.[3] Despite this, the fact that Biela's Comet was the only comet known to intersect the Earth's orbit was to make it of particular interest, both to astronomers and the public, during the 19th century.

The 1839 apparition was extremely unfavourable and no observations were made.

The comet was recovered on November 26, 1845, by Francesco de Vico. Initially a small, faint nebulosity, subsequent observations showed that something remarkable had happened to it. Matthew Fontaine Maury, observing on 14 January 1846, noted that an apparent companion was located 1 arc minute north of the comet.[4] After this announcement many astronomers began observing the comet, and noted that the two elements (usually referred to as "Comet A" and "Comet B" in modern nomenclature) alternated in brightness, developing parallel tails as they approached perihelion. Some observations indicated an "archway of cometary matter" extending between the two nuclei.[5] 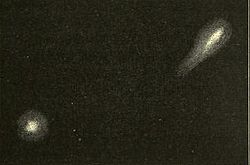 The two components of Biela in 1852, as drawn by Secchi.

In 1852 the comet was again recovered more or less as predicted, with "Comet A" being recovered first, by Angelo Secchi on August 26.[6] "Comet B" was finally relocated on September 16, and once again both nuclei alternated in brightness during the period of observation. "A" was last detected on this apparition on September 26 and "B" on September 29, in both cases by Otto Wilhelm Struve. Subsequent orbital calculations indicated that the nuclei had probably split around 500 days before the 1845 apparition,[7] though more recent work has determined that it may have occurred near aphelion in late 1842.[8]

Neither part could be found on their predicted periodic returns in 1859 (in any case an unfavourable return for viewing), 1865, and 1872. However, on November 27, 1872, a brilliant meteor shower (3,000 per hour) was observed radiating from the part of the sky where the comet had been predicted to cross in September 1872. This was the date when Earth intersected the comet's trajectory. These meteors became known as the Andromedids or "Bielids" and it seems apparent that they indicated the death of the comet. The meteors were seen again on subsequent occasions for the rest of the 19th century, but have now faded away, probably due to gravitational disruption of the main filaments.

There were, however, inconclusive observations during the 1865 and 1872 returns. Charles Talmage, using ephemerides provided by John Russell Hind, claimed to have briefly observed a nebulous object in approximately the right position in November 1865. James Buckingham also observed two nebulosities in 1865 after studying Hind's predictions, but Hind subsequently stated that they were unlikely to be Biela's Comet, as they were much closer together than the two components of the comet should have been. A puzzling observation recorded as X/1872 X1, seen by N. R. Pogson in late 1872 from the Madras Observatory, was also speculated to be a recovery of Biela's Comet, though once again this was later shown to have been unlikely.

Despite the apparent destruction of the comet, there were a number of searches for it during the later 20th century. Brian G. Marsden and Zdeněk Sekanina attempted to calculate a likely orbit for any remaining parts of the comet; it was during a search using Marsden's calculations that Luboš Kohoutek discovered Comet Kohoutek. It has been calculated that the mass of the debris left in the Andromedid meteor stream is still much less than the total mass of the comet. Given that it is more likely that the main mass loss occurred near aphelion before the 1845 apparition, it seems possible that fragment A at least may still exist as a 'dormant' comet.[9]

There have been several attempts to identify objects discovered subsequently either as Biela's Comet or as a remnant of it. The German astronomer Karl Ristenpart attempted several times to prove a link with the comet now known as 18D/Perrine-Mrkos, which had a very similar orbit to Biela apart from a differing Argument of Perihelion.[10] Despite this, it was not possible to prove any relationship and Perrine-Mrkos, an intrinsically faint object, has itself since been lost. Comet 207P/NEAT (P/2001 J1), discovered in 2001 by the NEAT asteroid survey, was also found to have a similar orbit to Biela's Comet, and it was initially thought possible that it was in some way related to it.[11] 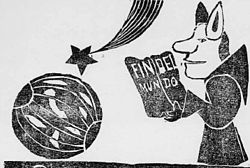 Biela's Comet was the subject of several panics over close approaches to Earth. An 1877 newspaper illustration from Chile, captioned "inevitable impact of the Earth with Comet Biela"

Biela has sometimes been proposed as the source of meteoric impacts on Earth.

A fringe theory links together several major fires that occurred simultaneously in America, including the Great Chicago Fire and the Peshtigo Fire, claiming that they were caused by fragments of Biela's Comet striking the Earth.[12] The theory was first proposed by Ignatius L. Donnelly in 1883, and was revived in a 1985 book[13] and further explored in an unpublished 2004 scientific paper.[14] However, scientists with expertise in the area dispute that such a scenario is possible; meteorites in fact are cold to the touch when they reach the Earth's surface, and there are no credible reports of any fire anywhere having been started by a meteorite.[15][16] Given the low tensile strength of such bodies, if a fragment of an icy comet were to strike the Earth, the most likely outcome would be for it to disintegrate in the upper atmosphere, leading to an air burst explosion analogous to that of the Tunguska event.[17]

On November 27, 1885, an iron meteorite fell in northern Mexico, at the same time as a 15,000 per hour outburst of the Andromedid meteor shower. The Mazapil meteorite has sometimes been attributed to the comet, but this idea has been out of favor since the 1950s as the processes of differentiation required to produce an iron body are not believed to occur in comets.

Biela's Comet (and Comet Encke) had a role in scientific history in the generally-discredited concept of luminiferous aether: as its orbit perturbed and shortened, the shortening could only be ascribed to the drag of an "ether" through which it orbited in outer space. One reference (see External links) reads:

Encke's comet is found to lose about two days in each successive period of 1200 days. Biela's comet, with twice that length of period, loses about one day. That is, the successive returns of these bodies is found to be accelerated by this amount. No other cause for this irregularity has been found but the agency of the supposed ether.