Comet Encke or Encke's Comet (official designation: 2P/Encke) is a periodic comet that completes an orbit of the Sun once every three years — the shortest period of any known comet. It was first recorded by Pierre Méchain in 1786, but it was not recognized as a periodic comet until 1819 when its orbit was computed by Johann Franz Encke; like Halley's Comet, it is unusual in being named after the calculator of its orbit rather than its discoverer.

Comets are in unstable orbits that evolve over time due to perturbations and outgassing. Given Encke's low orbital inclination near the ecliptic and brief orbital period of 3 years, the orbit of Encke is frequently perturbed by the inner planets.[3]

The failed CONTOUR mission was launched to study this comet, and also Schwassmann-Wachmann 3.

On April 20, 2007, STEREO-A observed the tail of Comet Encke to be temporarily torn off by magnetic field disturbances caused by a coronal mass ejection (a blast of solar particles from the Sun).[4] The tail grew back due to the continuous shedding of dust and gas by the comet.[5] 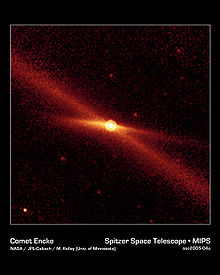 A Spitzer image of Encke and its debris trail in infrared light.

Comet Encke is believed to be the originator of several related meteor showers known as the Taurids (which are encountered as the Northern and Southern Taurids across November, and the Beta Taurids in late June and early July).[6][7]

More than one theory has associated Encke's Comet with impacts of cometary material on Earth, and with cultural significance.

The Tunguska event of 1908, probably caused by the impact of a cometary body, has also been postulated by Czechoslovakian astronomer Ľubor Kresák as a fragment of Comet Encke.[9] 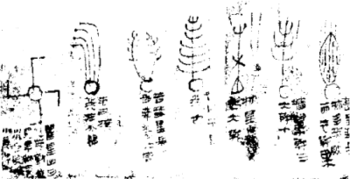 A Han Dynasty silk comet atlas, featuring drawings of comets believed by Victor Clube and Bill Napier to be related to the breakup of Encke's Comet in the past

A theory holds that the ancient symbol of the swastika appeared in a variety of cultures across the world at a similar time, and could have been inspired by the appearance of a comet from head on, as the curved jets would be reminiscent of the swastika shape (see Comets and the swastika motif). Comet Encke has sometimes been identified as the comet in question. In their 1982 book Cosmic Serpent (page 155) Victor Clube and Bill Napier reproduce an ancient Chinese catalogue of cometary shapes from the Mawangdui Silk Texts, which includes a swastika-shaped comet, and suggest that some of the comet drawings were related to the breakup of the progenitor of Encke and the Taurid meteoroid stream. Fred Whipple in his The Mystery of Comets (1985, page 163) points out that Comet Encke's polar axis is only 5 degrees from its orbital plane: such an orientation is ideal to have presented a pinwheel like aspect to our ancestors when Encke was more active.

Importance in the scientific history of luminiferous aether

Comet Encke (and Biela's Comet) had a role in scientific history in the generally discredited concept of luminiferous aether. As its orbit was perturbed and shortened, the shortening could only be ascribed to the drag of an "ether" through which it orbited in outer space. One reference (see External links) reads:

Encke's comet is found to lose about two days in each successive period of 1200 days. Biela's comet, with twice that length of period, loses about one day. That is, the successive returns of these bodies is found to be accelerated by this amount. No other cause for this irregularity has been found but the agency of the supposed ether.